On the eve of the anniversary of the Roe v. Wade decision, a new Kaiser Family Foundation analysis finds 25 states either bar abortion coverage in Affordable Care Act (ACA) marketplace plans or limit it to cases of rape or incest or when the woman’s life is endangered. In an additional six states, no 2016 ACA plans offer abortion coverage despite the absence of state legislative restrictions (Delaware, Iowa, Minnesota, Nevada, West Virginia and Wyoming). In three states without bans, plans that include abortion coverage are unavailable in at least one county (Colorado, Illinois and Texas).

By 2017, every ACA marketplace is required to have at least one Multi-State Plan that excludes abortion coverage. 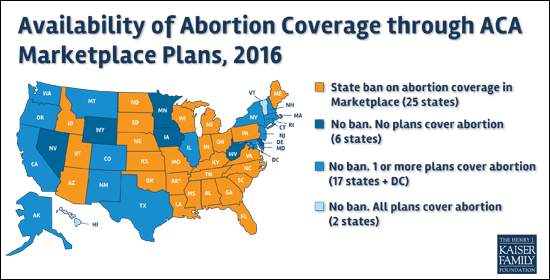 Coverage for Abortion Services in Medicaid, Marketplace Plans and Private Plans reviews federal and state policies on coverage of abortion services. It also examines the availability of abortion coverage in private plans, ACA marketplace plans, and Medicaid, providing estimates of the number of women with the option for coverage and those subject to restrictions.

For more information, see the Foundation’s interactive map showing how state policies on abortion coverage in Medicaid and private insurance have changed from 2000 to 2016.