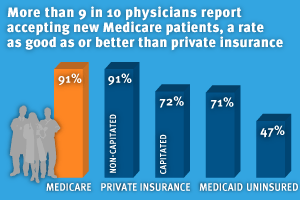 Briefing on the ACA in CA: Year One & Beyond

Continuing an effort to explore Affordable Care Act (ACA) implementation in the states, the Kaiser Family Foundation and the Blue Shield of California Foundation examined ACA implementation in California (CA) at a Sacramento, Calif. briefing and panel discussion on May 28. A state official, experts and advocates discussed issues and challenges related to implementation of the law, and the practical impact of providing coverage to roughly 4.5 million Californians who have coverage via the state marketplace or the Medi-Cal expansion.

Access to Care for the Insured and Remaining Uninsured: A Look at California During Year One of ACA Implementation

This Visualizing Health Policy infographic provides a snapshot of men’s health care and insurance coverage issues, including health status, access to care and use of services. It compares the uninsured rates of men and women, their cost barriers to care, their connection to clinicians, and their use of prescription drugs,…

Gender Differences in Health Care, Status, and Use: Spotlight on Men’s Health

This slideshow presents findings from the 2013 Kaiser Men’s and Women’s Health Survey on men’s health care, access and coverage, and draws comparisons to women’s health care. The slideshow also presents findings for low-income and uninsured men, including financial barriers to care, frequency of clinician visits, use of prescription drugs, and the likelihood of getting counseling and screenings, such as HIV tests.

How has the ACA Medicaid Expansion Affected Providers Serving the Homeless Population: Analysis of Coverage, Revenues, and Costs

To further understand how the first full year of Medicaid expansion has affected patients who are homeless and the providers who care for them, this analysis uses data from the Uniform Data System (UDS) for health centers to examine changes in insurance coverage, revenues and costs among Health Care for the Homeless (HCH) projects serving the homeless population.