Trends in Medicaid Spending Leading up to ACA Implementation

Because no existing Medicaid data source includes current spending data, current enrollment data, and detailed data on spending per enrollee, we combine data from three sources for this analysis.

CMS-64. The main source for spending data is the Medicaid Financial Management Reports (Form 64) from the Center for Medicare and Medicaid Services (CMS) for federal fiscal years 2007 to 2013, which are used to obtain aggregate spending. These data are available by state and spending category. At this time, the CMS-64 does not report enrollment or spending by eligibility group. However, in the new future, it will report total enrollment, as well as enrollment for the new adult eligibility group.

Medicaid Enrollment. Data on enrollment come from a survey of all 50 states and the District of Columbia conducted by Health Management Associates (HMA) for the Kaiser Commission on Medicaid and the Uninsured (KCMU). These data provide point in time enrollment for June of each year. Total enrollment data were reported for all states and the District of Columbia for two main groups: 1) aged and individuals with disabilities; and 2) child, parent, and other non-aged, non-disabled adult enrollment (throughout the report referred to simply as “family enrollment”).

Accurately estimating per enrollee spending growth rates requires data that can link spending to enrollment groups. This is because simply dividing the total change in spending by the total change in enrollment would bias the estimate of the growth in spending per enrollee. Overall, for the time period of this analysis, spending would be biased downward because of the faster enrollment among less expensive family beneficiaries relative to the aged and disabled. This bias could be even more pronounced among subsets of services. For example, since families account for only a small share of long-term care spending, enrollment growth among families is not likely to affect long-term care spending.

Unfortunately, the CMS-64 does not enable us to stratify Medicaid spending growth for families versus the aged/disabled because CMS-64 data do not associate spending with eligibility groups. Therefore, the analysis presented in this paper draws on the Medicaid Statistical Information System (MSIS), to estimate spending per enrollee growth by eligibility group. MSIS provides detailed individual-level spending and enrollment data stratified by service type and eligibility group, but it is not available for the more recent years in this analysis. We use the 2010 MSIS, as well as the 2007 MSIS, the year corresponding with the start of the time period in this analysis. 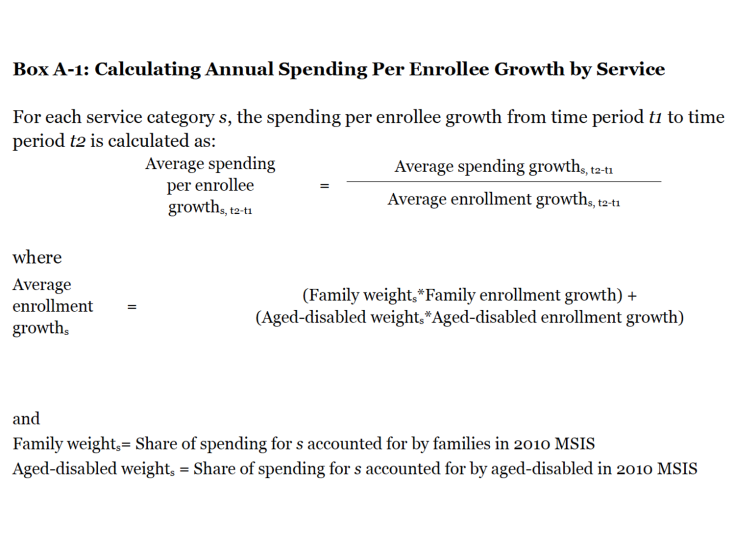 Box A-1: Calculating Annual Spending Per Enrollee Growth by Service 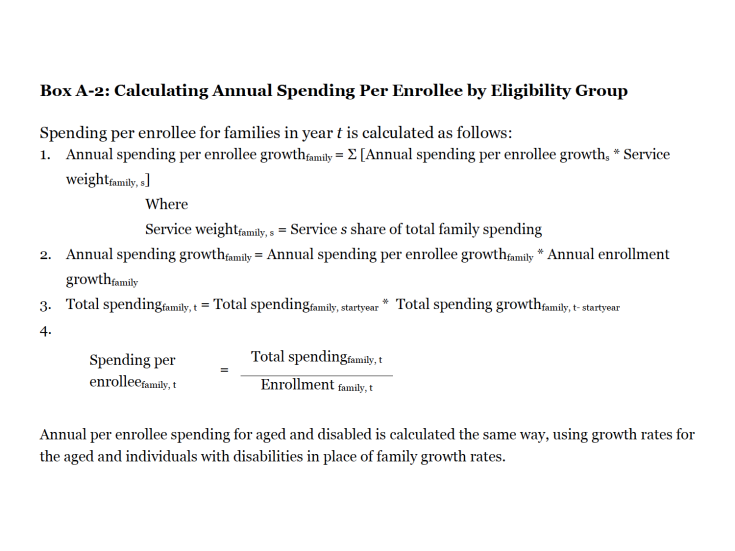 Box A-2: Calculating Annual Spending Per Enrollee by Eligibility Group