A primary goal of the Affordable Care Act of 2010 (ACA) is reducing the number of uninsured people and increasing the affordability and availability of health insurance coverage. The ACA fills in existing gaps in coverage by expanding the Medicaid program, building on employer-based coverage, and providing premium subsidies to make private insurance more affordable (Figure 15). Some of the ACA provisions went into effect earlier, but the major coverage expansions go into effect January 1, 2014. 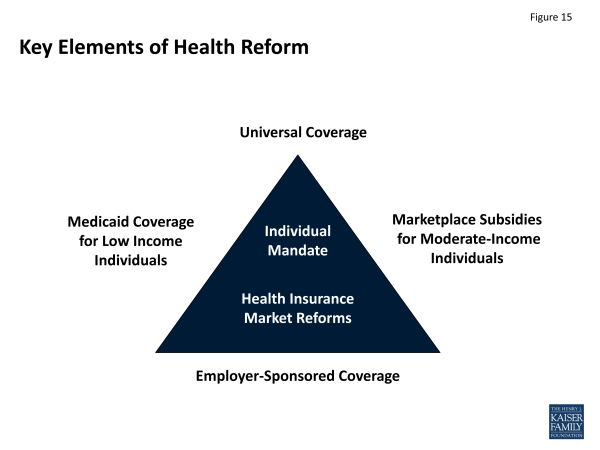 The coverage provisions in the ACA target the uninsured population by income. Among the 47.3 million nonelderly uninsured people in 2012, over half (24 million) have incomes at or below 138% FPL. This group will be affected by the Medicaid expansion in 2014 in states that chose to implement the expansion (Figure 16). Four in ten of the nonelderly uninsured population have incomes between 139% – 400% FPL, the income level targeted by subsidies for coverage purchased through the newly created Health Insurance Marketplaces.  Coverage for all uninsured individuals will be impacted by new rules and requirements. 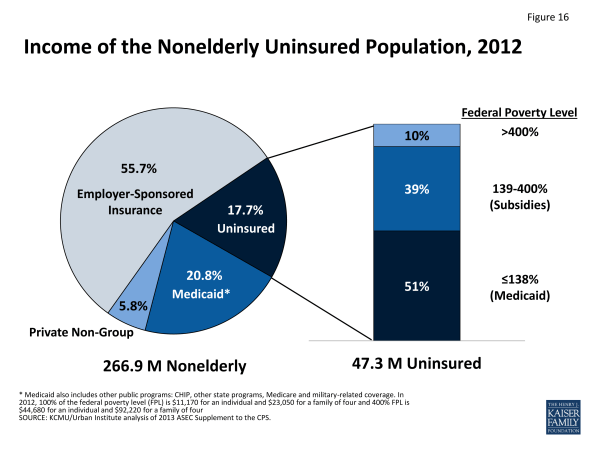 Beginning in 2014, the ACA provides for the expansion of Medicaid to eligible adults with incomes at or under 138% FPL. The Medicaid expansion eliminates the historical exclusion of adults outside of traditional eligibility groups, such as those without dependent children. Undocumented immigrants remain ineligible for Medicaid, and lawfully present non-citizens are subject to a five-year waiting period for Medicaid coverage. To ensure that people do not lose Medicaid coverage before key ACA provisions take effect, all states are required to maintain current Medicaid eligibility levels for adults until 2014 and eligibility levels for children in Medicaid and CHIP until 2019.

The ACA also includes several provisions to streamline Medicaid enrollment. The ACA requires states to implement new streamlined Medicaid application and enrollment processes by 2014 that will allow individuals to apply online, by phone, by mail, or in-person, use new simplified income standards, and rely on electronic data matches to the greatest extent possible to verify eligibility criteria. To implement these processes, states are building new eligibility and enrollment systems and replacing or making major upgrades to their Medicaid systems, with the federal government providing significant funding for these efforts.1 Even with these new streamlined enrollment processes in place, effective outreach and enrollment efforts will be fundamentally important for translat­ing the new coverage opportunities into increased coverage.

The impact of the Medicaid expansion on the uninsured will depend on state decisions about whether to expand their programs. The June 2012 Supreme Court decision limited the government’s authority to require states to implement the expansion, essentially making the expansion optional for states. As of the end of September 2013, 26 states were not planning to implement the expansion and 54% of the currently uninsured population at or below 138% of poverty live in these states.2 Even in states that do not expand Medicaid, existing coverage for groups already guaranteed coverage by Medicaid, such as children in poverty, will remain.

In states that expand Medicaid, many low-income parents and other adults will become newly eligible for coverage. Overall, the median eligibility limit for parents in the 25 states (including DC) moving forward with the Medicaid expansion will rise from 106% FPL to 138% FPL for parents and from 0% to 138% FPL for childless adults from January 2013 to January 2014. Overall, eligibility levels will increase for parents in 18 states and for childless adults in 23 states.3

In states that do not expand Medicaid, millions will fall into a “coverage gap” of earning too much to qualify for traditional Medicaid coverage but not enough to qualify for other ACA coverage provisions. The median Medicaid eligibility levels for parents in states not implementing the ACA Medicaid expansion is just 47% of poverty, or about $9,400 a year for a family of three, and only one of those states (Wisconsin) covers adults without dependent children. State decisions not to expand their programs will leave over five million people without an affordable coverage option.4

The ACA establishes Health Insurance Marketplaces, also known as exchanges, where individuals and small employers can purchase insurance starting January 1, 2014. These new marketplaces are designed to ensure a more level competitive environment for insurers and to provide consumers with information on cost and quality to enable them to choose among plans. Open enrollment for plans in the Marketplaces began October 1, 2013.

Premium tax credits will help reduce the cost of non-group coverage premiums purchased in the Marketplace. To help ensure that coverage purchased in these new Marketplaces is affordable, the federal government will provide tax credits for individuals and families with incomes between 100% ($11,490 for an individual or $19,530 for a family of three in 2013) of the federal poverty level (FPL) and 400% FPL ($45,960 for an individual or $58,590 for a family of three in 2013). These tax credits will limit the cost of the premium to a share of income and will be offered on a sliding scale basis. In addition to the premium tax credits, the federal government will also make available cost-sharing subsidies to reduce what people with incomes between 100% and 250% of poverty will have to pay out-of-pocket to access health services. The cost-sharing subsidies will also be available on a sliding scale based on income.

Changes to insurance regulations will improve access to coverage for those who may have been previously denied access. The law will improve the availability of health insurance by adopting new rules for insurers beginning in 2014 that will prevent them from denying coverage to people for any reason, including their health status, and from charging more to people who are sick. However, the law will continue to allow insurers to charge older people and tobacco users more for coverage, though how much they can charge will be limited.

Requirements and Incentives for Coverage

Under the ACA, almost all people are required to have health insurance coverage. This requirement, beginning in 2014, will only apply to those with access to affordable coverage, defined as costing no more than 8% of an individual’s or family’s income (certain other exemptions to the mandate will also be granted). Greater access to Medicaid and the availability of new premium subsidies will increase the availability of affordable coverage options enabling more people to gain coverage. Still, those who choose not to have coverage and who are not exempt from the requirement will be required to pay a yearly financial penalty through their taxes.

Large employers will face penalties for not providing affordable coverage to full-time employees. Beginning in 2015, employers with more than 50 employees will be assessed a fee up to $2,000 per full-time employee (in excess of 30 employees) if they do not offer affordable coverage or if they have at least one employee who receives a premium tax credit through a Marketplace. This requirement does not apply to small employers. While the employer requirements may help many uninsured individuals with a worker in their family, a majority of uninsured workers work in small firms that are not required to provide insurance coverage.

Tax credits are available to small businesses to help subsidize the cost of providing coverage to employees. Recognizing the challenges that small employers, especially those with low-wage workers, face in providing coverage to their employees, the law provides tax credits to the smallest employers (those with fewer than 25 workers and average annual wages of less than $50,000) to offset the cost of that coverage. These tax credits were available beginning in 2010.

Impact of the Law on the Uninsured Population

With full implementation of the ACA, the number of people without insurance could decrease by half.  At full implementation of the ACA (and all states expanding), the uninsured rate would fall by almost 50%, reducing the number of uninsured by over 23 million people.8  The potential impact of the ACA on the uninsured varies by state and, within state, local area, reflecting current coverage patterns and eligibility for new coverage options (Figure 17). 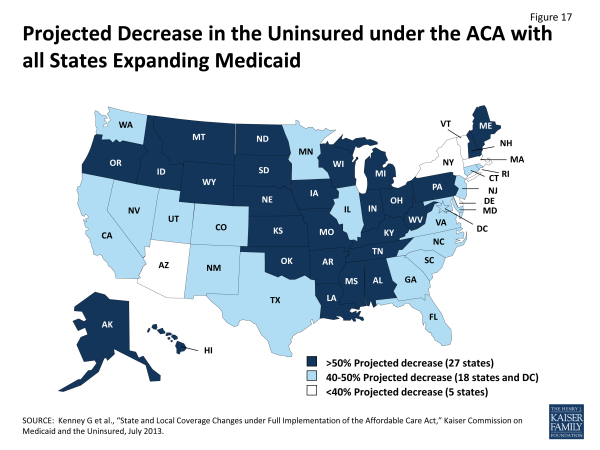 Figure 17: Projected Decrease in the Uninsured under the ACA with all States Expanding Medicaid

The impact of the ACA on the uninsured will depend on the number of states expanding Medicaid and the outreach and enrollment efforts in the Marketplaces.  If only the 25 states (including DC) planning to implement the Medicaid expansion as of September 2013 do so, the impact on the uninsured would be reduced substantially.9 Further, the initial roll out of open enrollment for Marketplace coverage had several technical problems that, if unresolved, may hamper people’s ability to enroll in coverage. Careful attention to who is left out of coverage as the ACA unfolds is essential to health reform’s success.

Despite increases in coverage options, millions will remain uninsured after the ACA is implemented. While the ACA will make important strides in reducing the number of uninsured people, an estimated 26 million people will remain uninsured with full implementation.10 These individuals are likely to include:  immigrants who are not legal residents and therefore not eligible for Medicaid coverage or for federal premium subsidies; people who are exempt from the mandate, in most cases because they do not have access to affordable coverage; and people who are subject to the mandate but choose to pay the penalty rather than purchase health insurance. The residual uninsured population will be concentrated in states that do not implement the Medicaid expansion. Many uninsured people live in health professional shortage areas and may continue to do so even if they gain insurance under the ACA, underscoring the need to continue to develop and support safety-net providers and community health clinics.11