THE UNINSURED A PRIMER 2013 – 5: WHAT ARE THE FINANCIAL IMPLICATIONS OF LACK OF COVERAGE?

For many uninsured people, the costs of health insurance and medical care are weighed against equally essential needs. When people without health coverage do receive health care, they may be charged for the full cost of that care, which can strain family finances and lead to medical debt.  Uninsured people are more likely to report problems with high medical bills than those with insurance. Low-income individuals, who comprise a large share of the uninsured population, were three times as likely as those with higher incomes to report having difficulty paying basic monthly expenses such as rent, food, and utilities.1

Most uninsured people do not receive health services for free or at reduced charge.  Hospitals frequently charge uninsured patients two to four times what health insurers and public programs actually pay for hospital services.2  More than half of uninsured adults paid full price for their usual source of care, with 82% of uninsured adults who used any medical services in the previous year paying some amount out-of-pocket for health care.3

Uninsured people often must pay “up front” before services will be rendered.  When people without health coverage are unable to pay the full medical bill in cash at the time of service, they can sometimes negotiate a payment schedule with a provider, pay with credit cards (typically with high interest rates), or can be turned away.4

People without health coverage spend less than half of what those with coverage spend on health care, but they pay for a much larger portion of their care out-of-pocket. In 2008, the average person who was uninsured for a full-year incurred $1,686 in total health care costs compared to $4,463 for the nonelderly with coverage.5  However, these averages are affected by the high number of uninsured individuals that do not seek health care at all.6 The uninsured pay for about a third of this care out-of-pocket, totaling $30 billion in 2008.  This total included the health care costs for those uninsured all year and the costs incurred during the months the part-year uninsured have no health coverage.

The remaining costs of their care, the uncompensated costs for the uninsured, amounted to about $57 billion in 2008.  About 75% of this total ($42.9 billion) was paid by federal, state, and local funds appropriated for care of the uninsured population.7  Nearly half of all funds for uncompensated care come from the federal government, with the majority of federal dollars flowing through Medicare and Medicaid.   While substantial, these government dollars amount to a small slice (2%) of total health care spending in the U.S.

Safety net hospitals that serve a large number of uninsured individuals will receive a reduction in federal disproportionate share (DSH) payments beginning in 2014. DSH payments are federal Medicaid payments intended to cover the extra cost experienced by hospitals serving a large number of low-income and uninsured patients. Unlike other Medicaid payments, federal DSH funds are capped at a state’s annual allotted amount, determined by statutory formula, and states have two years to claim their allotments. DSH allotments currently vary considerably across states and total about $11 billion a year.9 In 2014, when many states will expand Medicaid eligibility to 138% of poverty, the ACA will begin reducing DSH payments, with total reductions by 2022 estimated to be more than $22 billion.10 However, some states may elect not to expand Medicaid eligibility, which would leave uninsured residents with few low-cost coverage options and the hospitals that serve these individuals with less federal DSH funding. 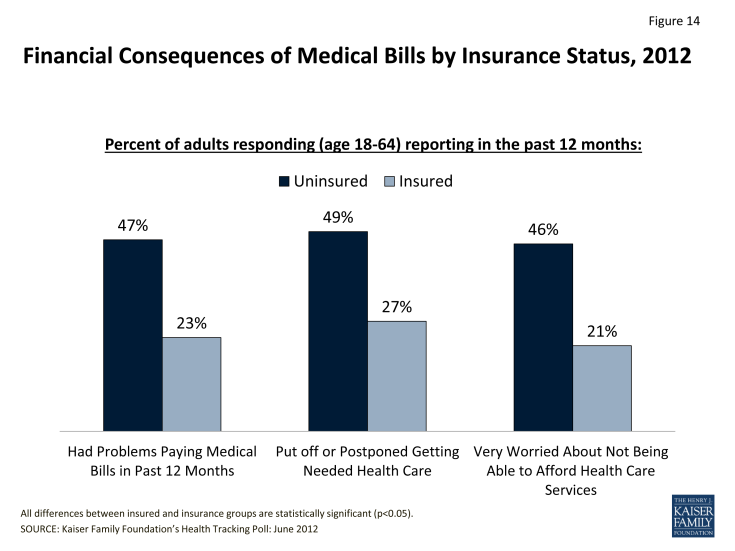 Unprotected from medical costs and with few assets, uninsured people are at risk of being unable to pay off medical debt.  Like any bill, when medical bills are not paid or paid off too slowly, they are turned over to a collection agency, and a person’s ability to get further credit is significantly limited.  Almost one-quarter (23%) of uninsured nonelderly individuals have medical bills that they are unable to pay at all, compared to 6% of those with private insurance.14 Medical debts contribute to almost half of the bankruptcies in the United States, and uninsured people are more at risk of falling into medical bankruptcy than people with insurance.15