THE UNINSURED A PRIMER 2013 – 4: HOW DOES LACK OF INSURANCE AFFECT ACCESS TO HEALTH CARE?

Health insurance makes a difference in whether and when people get necessary medical care, where they get their care, and ultimately, how healthy people are.  Uninsured adults are far more likely than those with insurance to postpone or forgo health care altogether.  The consequences can be severe, particularly when preventable conditions go undetected.

Uninsured people are far more likely than those with insurance to report problems getting needed medical care.  One-quarter of adults without coverage (25%) say that they went  without care in the past year because of its cost compared to 4% of adults with private coverage.  Part of the reason for poor access among the uninsured is that more than half of uninsured adults (55%) do not have a regular place to go when they are sick or need medical advice (Figure 11). 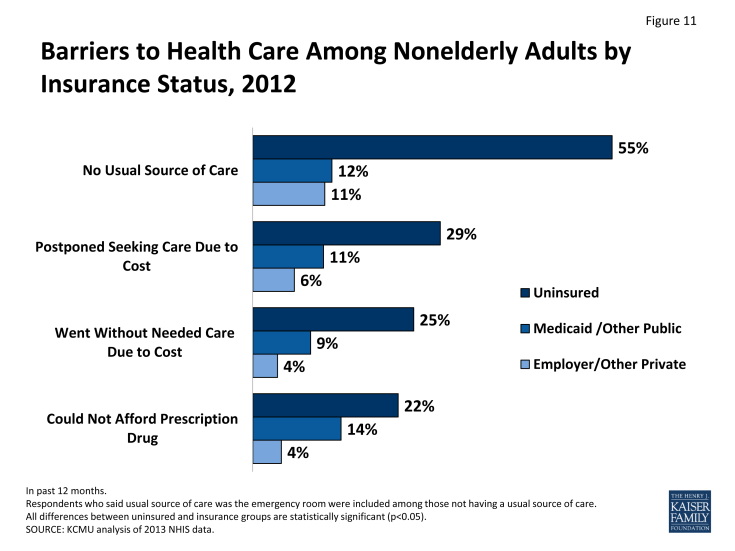 Access to health care has eroded over time for many.  Rising health care costs have made health care less affordable over time, particularly for uninsured people.  Between 2000 and 2010, the differences in access to care between those with and without coverage widened.invalid

Uninsured people are less likely than those with coverage to receive timely preventive care.  Silent health problems, such as hypertension and diabetes, often go undetected without routine check-ups.  Uninsured nonelderly adults, compared to those with coverage, are far less likely to have had regular preventive care, including blood pressure, cholesterol checks, and cancer screenings.invalid,invalid  Uninsured patients are also less likely to receive necessary follow-up screenings after abnormal cancer tests.invalid Consequently, uninsured patients have increased risk being diagnosed in later stages of diseases, including cancer, and have higher mortality rates than those with insurance.invalid,invalid,invalid

Anticipating high medical bills, many uninsured people are not able to follow recommended treatments.  Nearly a quarter of uninsured adults say they did not take a prescribed drug in the past year because they could not afford it.invalid  Regardless of a person’s insurance coverage, those injured or newly diagnosed with a chronic condition receive similar follow-up care plans; however, people without health coverage are less likely than those with coverage to actually obtain all the services that are recommended.invalid

Problems getting needed care also exist among uninsured children.  Uninsured children are significantly more likely to lack a usual source of care, to delay care, or to have unmet medical needs than children with insurance (Figure 12).  Uninsured children with common childhood illnesses and injuries do not receive the same level of care as others.  As a result, they are at higher risk for preventable hospitalizations and for missed diagnoses of serious health conditions.invalid  Disparities exist even among children with special needs, including access to specialists.invalid 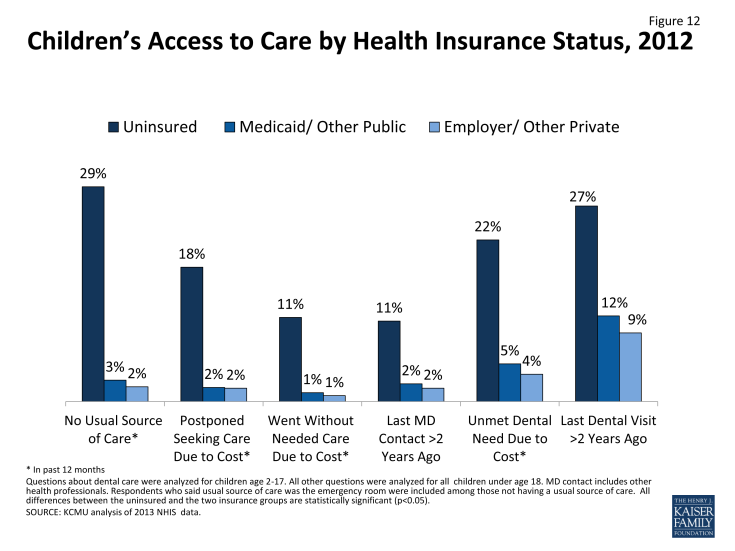 Lack of health coverage, even for short periods of time, results in decreased access to care.  Adults with gaps in their health insurance coverage in the previous year were less likely to have a regular source of care or to be up to date with blood pressure or cholesterol checks than those with continuous coverage.invalid Children who are uninsured for part of the year have more access problems than those with full-year public or private coverage.invalid

Research demonstrates that gaining health insurance restores access to health care considerably and diminishes the adverse effects of having been uninsured.  A seminal study of health insurance in Oregon found that newly insured Medicaid enrollees were more likely to receive care from a hospital or doctor than uninsured people.invalid  Gaining Medicaid coverage was associated with approximately 35% increased likelihood of having an outpatient visit and a 15% increased likelihood of taking a prescription. Two years after the study was completed, new findings show significant improvements in access, utilization, and self-reported health, as well as the reduction in catastrophic out-of-pocket medical spending among adults who gained coverage.invalid A separate study of three other states (New York, Maine, and Arizona) found that expansions in Medicaid eligibility for adults were associated with reduced mortality, as well as improvements in access to care and self-reported health status.invalid

The safety net of public hospitals, community clinics, and local service providers that provides health services to vulnerable populations is crucial in caring for the uninsured population; however, such services are unable to fully substitute for the access to care that insurance provides. Safety net providers, such as public hospitals, community health centers, rural health centers, and local health departments, provide care to people without health coverage.  In addition, private, office-based physicians provide some charity care, as do nearly all hospitals. However, the safety net is not comprehensive, and not all uninsured people have access to these providers.invalid

Increased demand and limited capacity means safety net providers are unable to meet all of the health needs of the uninsured population.  The ability of safety net providers to serve uninsured people has been threatened in recent years due to increased demand and eroding financing.invalid  Both health centers and public hospitals report an increase in demand in recent years, and many clinics report that they are at full capacity and cannot accept new patients.invalid Further, increasing financial pressures and changing physician practice patterns have contributed to a decline in charity care provided by physicians.invalid

In recognition of the growing need for services, federal funding for clinics has increased in recent years but still falls below need. Community health centers (CHCs) play an important role in caring for individuals without health coverage.invalid The ACA allocated $11 billion over five years for broad health center expansion, though legislation in April 2011 reduced the first year of new ACA investment by $600 million. The additional funding in the ACA is estimated to expand CHC service capacity to reach up to 44 million patients by 2015 and up to 50 million patients in 2019 (Figure 13). ACA also provides new funds for nurse-managed health centers and school-based clinics. While the number of uninsured patients is projected to drop significantly nationwide as a result of health reform, the share of uninsured patients cared for by CHCs is expected to remain relatively high compared to other primary health care providers.invalid 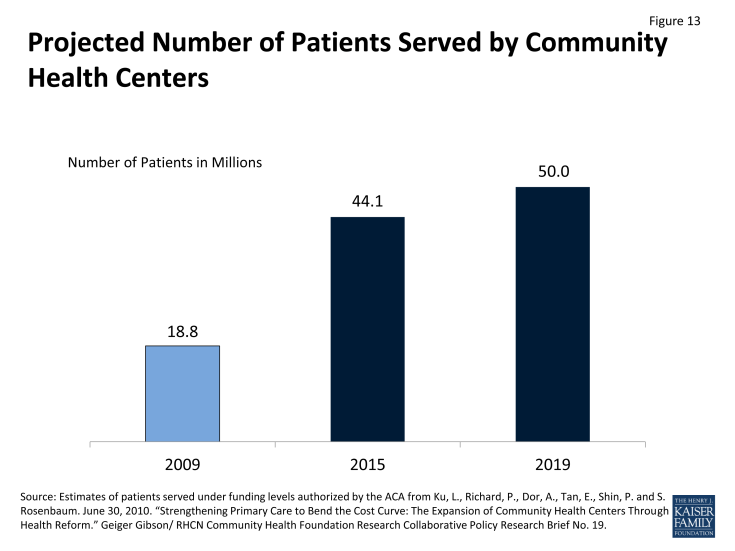