Since 2006, Medicare beneficiaries have had access to prescription drug coverage offered by private plans, either stand-alone prescription drug plans (PDPs) or Medicare Advantage prescription drug plans (MA-PD plans). These Medicare drug plans (also referred to as Part D plans) receive payments from the government to provide Medicare-subsidized drug coverage to enrolled beneficiaries. Part D plans are required to offer a defined standard benefit or one that is equal in value (Exhibit I.1). They may also offer an enhanced benefit. Medicare drug plans must meet defined requirements, but may vary in terms of premiums, benefit design, gap coverage, formularies, and utilization management rules. 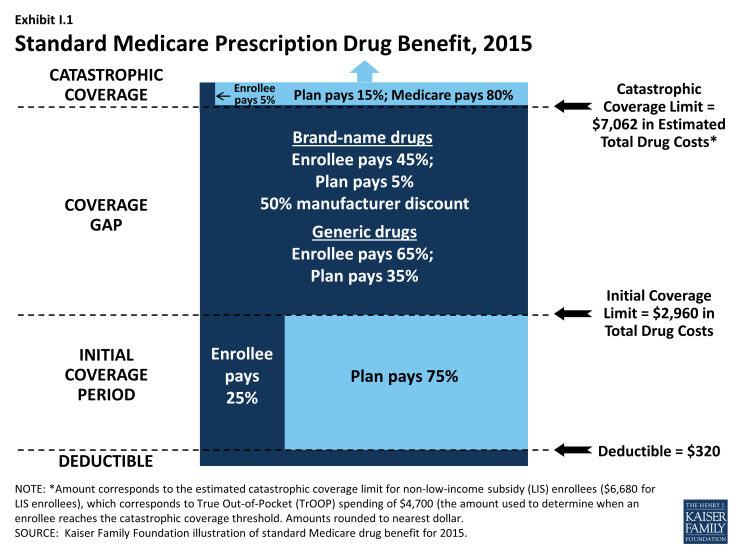 In 2015, more than 39 million Medicare beneficiaries are enrolled in Medicare drug plans, including 24 million in PDPs and 15 million in MA-PD plans.1, 2 About 12 million Part D enrollees are receiving extra help through the Part D Low-Income Subsidy (LIS) program to pay their drug plan premiums and cost sharing. Part D has evolved since its inception in 2006 due to changes in the private plan marketplace and the regulations that govern the program. The 2010 Affordable Care Act (ACA) is bringing significant improvements to the program, primarily phasing out the coverage gap, or “doughnut hole,” in the drug benefit.3 In addition to a 50 percent manufacturer discount on the price of brand-name drugs in the gap, the law further reduces cost sharing for brand-name and generic drugs in the gap over time, reducing cost sharing to the level that applies before the gap and eliminating the coverage gap in 2020. In addition, the Centers for Medicare & Medicaid Services (CMS) has implemented other statutory and regulatory changes that have resulted in some consolidation of Part D plan offerings, along with a degree of greater standardization.

This report presents findings from an analysis of the Medicare Part D marketplace in 2015, the program’s tenth year, and changes in various features of the drug benefit since 2006.4 It presents key findings in five different areas:

The findings are based on data from CMS for all plans participating in Part D. More detail about the methods used in this analysis is provided on page 53.