In 2015, a total of 1,001 PDPs will be offered nationwide, down by 14 percent from the 1,169 PDPs offered in 2014 and the lowest number of PDPs in the program’s history. (Exhibit 1) The lower number of plans reflects both the cumulative effect of mergers among plan sponsors and the response to CMS policies that encourage plan sponsors to eliminate low-enrollment plans and to maintain meaningful differences between multiple plan offerings. 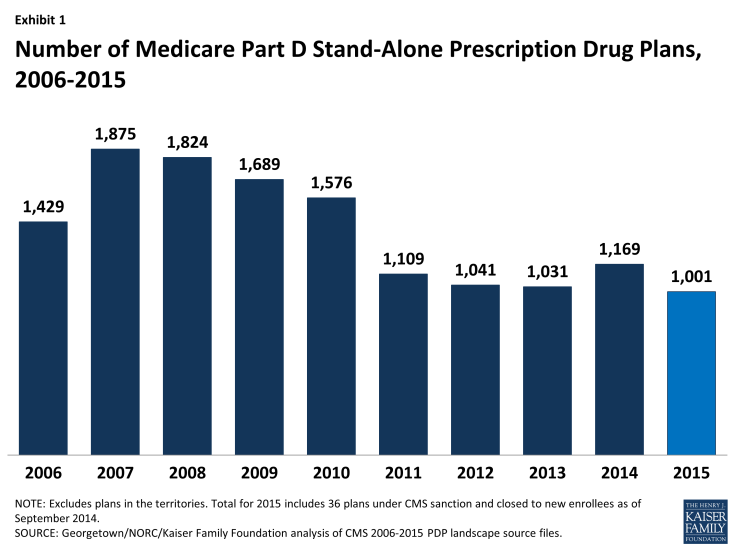 Despite a reduction in the number of PDPs nationwide, beneficiaries across the country continue to have a substantial number of Part D plan choices. The average beneficiary will have a choice of 30 stand-alone PDPs in 2015.1 (Exhibit 2; Appendix 1, Table A1) 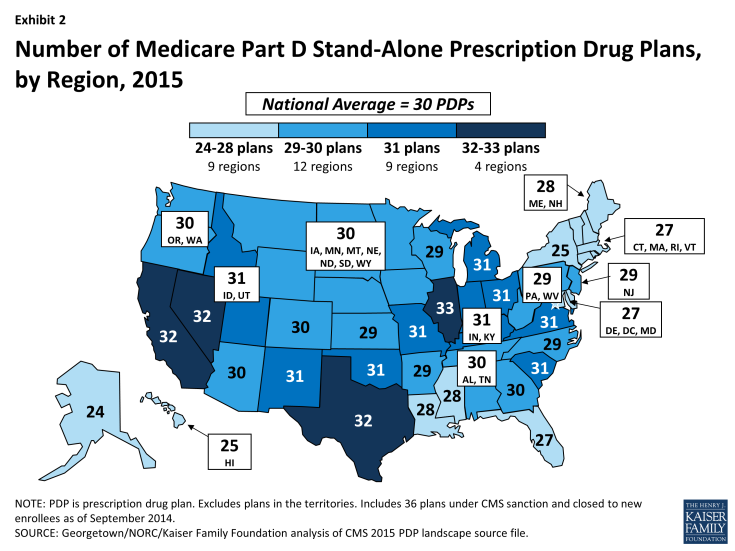 Inside the Part D marketplace, 70 new PDPs are joining the program for 2015, and 238 PDPs exited the program. Among the exiting plans, 70 PDPs exited the market entirely, whereas the other 168 PDPs were consolidated with another PDP.

The projected average monthly PDP premium for 2015 will be $38.83 (weighted by 2014 enrollment, assuming beneficiaries remain in their current plan).2 (Exhibit 3) This is a 4 percent increase ($1.56) from the weighted average monthly premium of $37.27 in 2013, and a 50 percent increase from $25.93 in 2006, the first year of the Medicare Part D drug benefit. As a point of comparison, since 2006, the medical care consumer price index (CPI) has increased 28 percent and the CPI for all items has increased 18 percent. 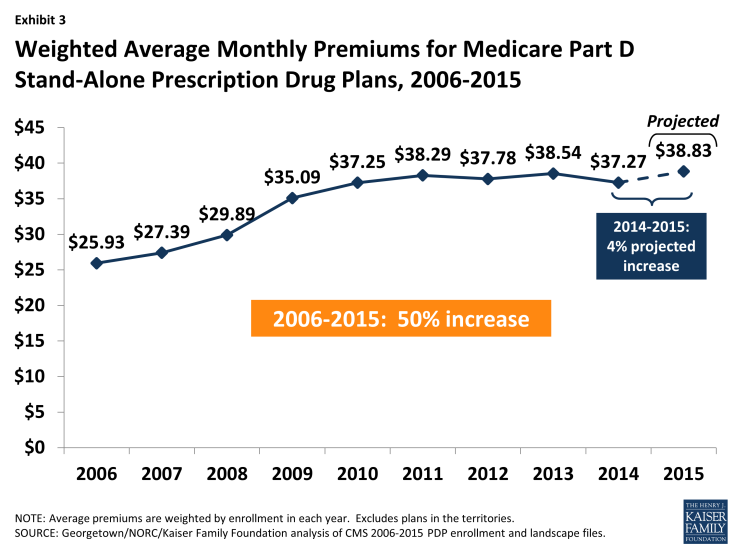 Average monthly PDP premiums (weighted by enrollment in each year) have been essentially flat from 2010 to 2014, corresponding with a time during which many popular brand-name drugs gained generic competitors and when several new low-premium PDPs entered the market. If even a relatively few beneficiaries are enrolled in different plans, effective in January 2015, then the average for 2015 will probably end up roughly the same as in 2014.

CMS has reported that the average premium for standard Part D coverage offered by PDPs and Medicare Advantage drug plans between 2014 and 2015 is increasing by about $1; the slightly higher premium increase reported here is based on PDPs only, excluding Medicare Advantage drug plans, and also includes PDPs offering enhanced coverage, which typically have higher premiums. For PDPs offering only the basic benefit, the 2015 premium is projected to be 0.5 percent lower than in 2014 (based on current enrollment patterns), whereas premiums for enhanced PDPs are projected to rise by about 7 percent.3 Enrollment changes during the annual enrollment period are likely to reduce modestly the weighted average increase reported here.

Underneath these overall program trends, premium changes for individual PDPs from 2014 to 2015 vary widely. A greater share of enrollees is projected to pay more per month if they stay in their current plans than the share expected to pay less or a similar amount. (Exhibit 4) 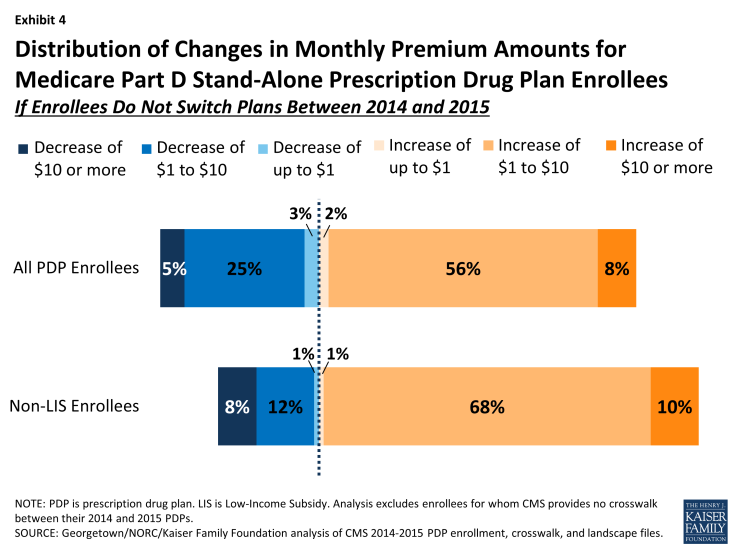 Changes to premiums from 2014 to 2015, averaged across regions and weighted by 2014 enrollment, vary widely across some of the most popular Part D PDPs. (Exhibit 5) 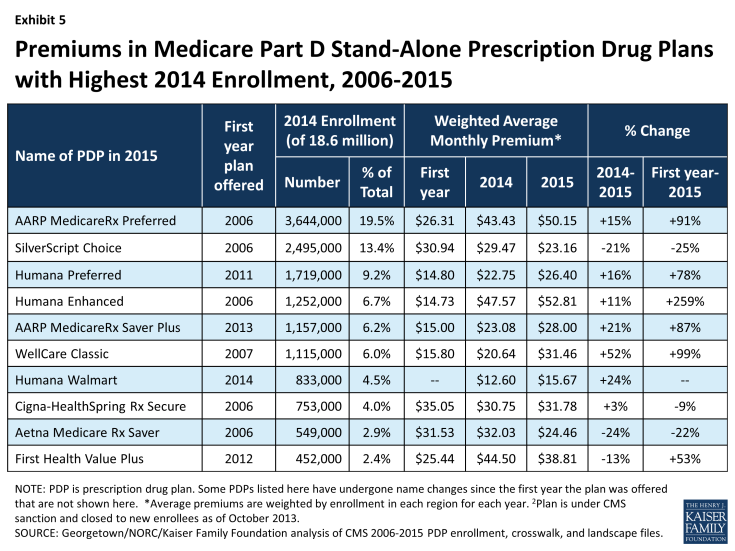 Monthly premiums for the most popular PDPs available since the start of the Part D program in 2006 have changed in different ways. 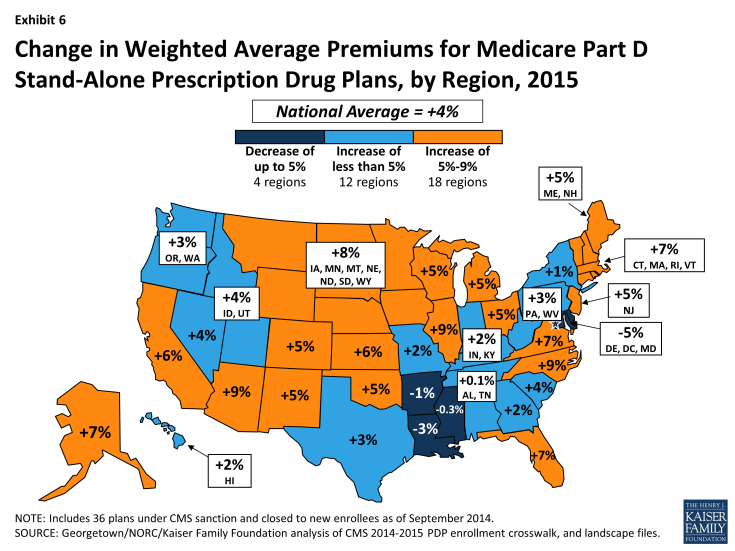 These average and plan-level premium amounts do not take into account the income-related Part D premium that took effect in 2011 for Part D enrollees with higher annual incomes ($85,000/individual and $170,000/couple). Established by the Affordable Care Act of 2010 (ACA), the income-related Part D premium requires higher-income enrollees to make an additional payment to the government for Part D coverage, regardless of the plan selected. In 2015, the monthly surcharge will range from $12.30 to $70.80, depending on income, in addition to the monthly premium payment for the specific Part D plan.4 In 2013, 4 percent of Part D enrollees were required to make these additional payments.5 Under current law, the income thresholds are not indexed to increase annually until 2020, meaning that by 2019, a projected 9 percent of Part D enrollees will pay income-related premiums.

In 2015, for the first time since the program started in 2006, all Part D PDPs will offer an alternative benefit design to the defined standard benefit, which has a $320 deductible in 2015 and 25 percent coinsurance for all covered drugs. Some plans modify or eliminate the deductible, and all PDPs use some type of varying cost-sharing tiers for covered generic and brand-name drugs. 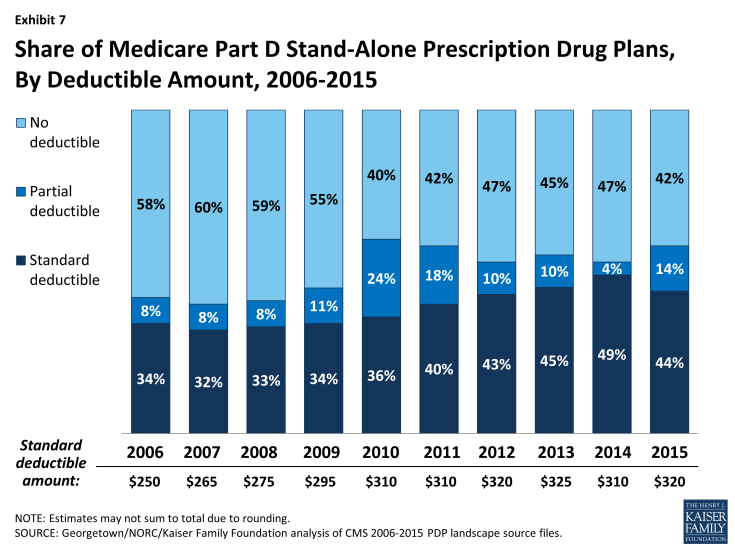 The coverage gap, or “doughnut hole,” is gradually becoming a less salient feature of the Part D benefit design, as a result of changes made by the ACA, and will be fully eliminated as of 2020, when beneficiaries will only be responsible for 25 percent of their total drug costs in the gap. Since 2011, any beneficiary with drug costs high enough to reach the gap has paid less than the full cost of the price of their drugs. In 2015, manufacturer prices for brand-name drugs purchased in the gap will be discounted by 50 percent, with plans paying an additional 5 percent of the cost and enrollees paying the remaining 45 percent. Plans will pay 35 percent of the cost for generic drugs in the gap, with enrollees paying 65 percent. In 2015, the coverage gap begins after an enrollee incurs $2,960 in total drug spending and ends after an enrollee has spent a total of $4,700 out of pocket (or $7,062 in total drug costs under the standard benefit).6 At that point, catastrophic coverage begins, where enrollees generally pay only 5 percent of drug costs. (Appendix 2)

Most Part D plans will offer no gap coverage in 2015 beyond what is required by the ACA under the standard benefit. With all Part D enrollees now getting coverage for a share of their costs in the gap, the value of additional gap coverage offered by plans will become lower each year until 2020, when the gap is fully closed.

In 2015, the total availability of premium-free “benchmark” plans—that is, PDPs available for no monthly premium to Low-Income Subsidy (LIS) enrollees—will be at its lowest level in the program’s ten years. 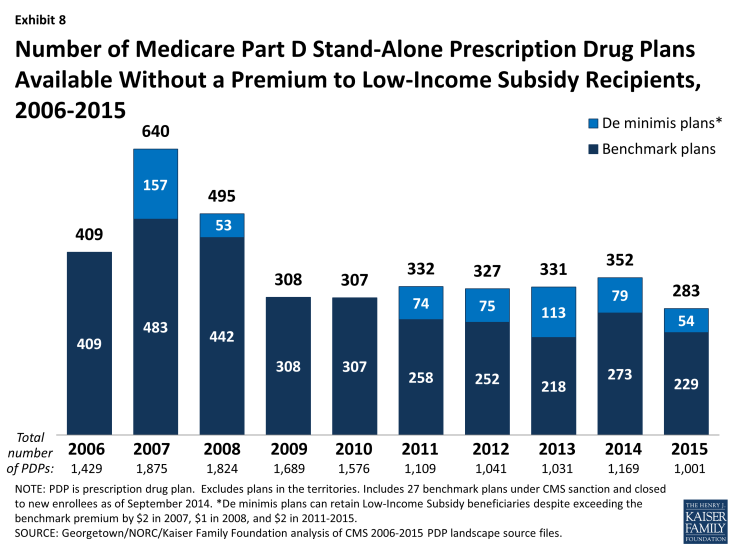 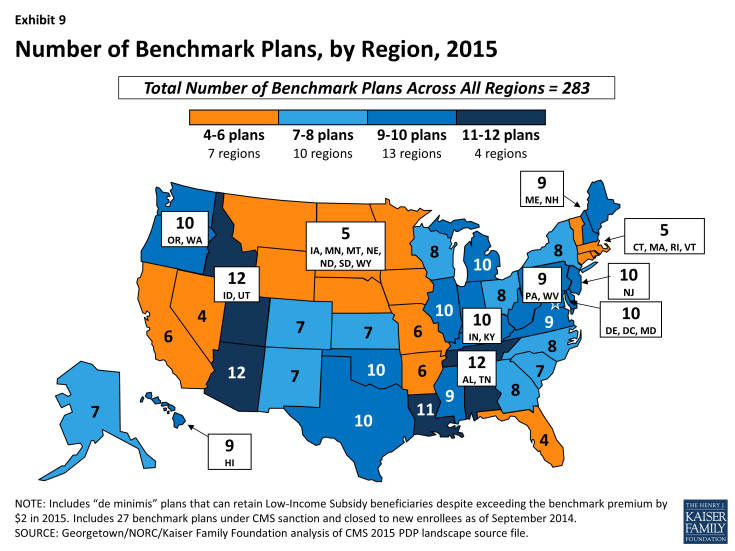 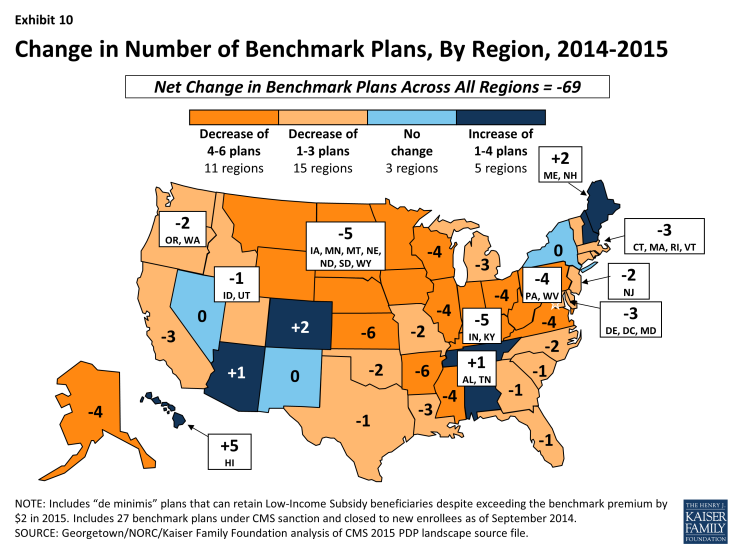 About 1.8 million people—more than one in five LIS beneficiaries (22 percent)—are enrolled in PDPs in 2014 that will not qualify as benchmark plans in 2015. (Exhibit 11) 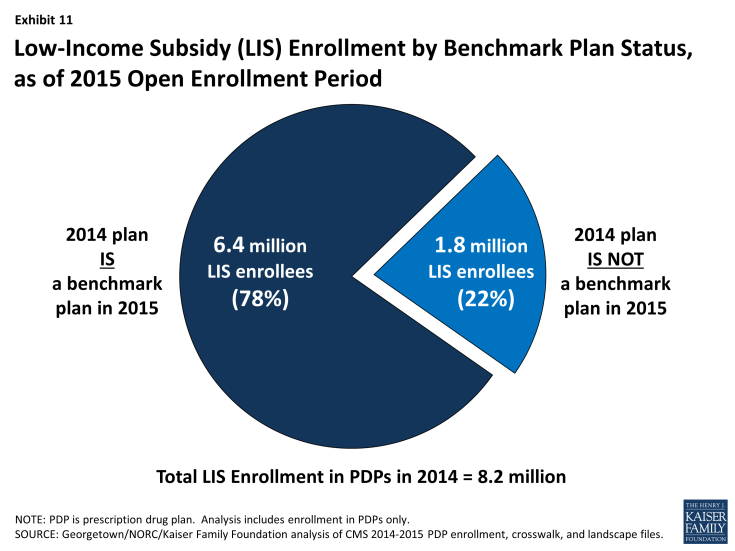 In 2014, about 70 percent of LIS enrollees in PDPs are in plans operated by just four plan sponsors (CVS Health, Humana, UnitedHealthcare, and Cigna). The first three of these sponsors offer PDPs that qualify as benchmark plans in at least 28 of the 34 PDP regions in 2015. By contrast, Cigna offers PDPs that qualify as premium-free in 23 regions in 2015, down from 27 in 2014. (Exhibit 12) 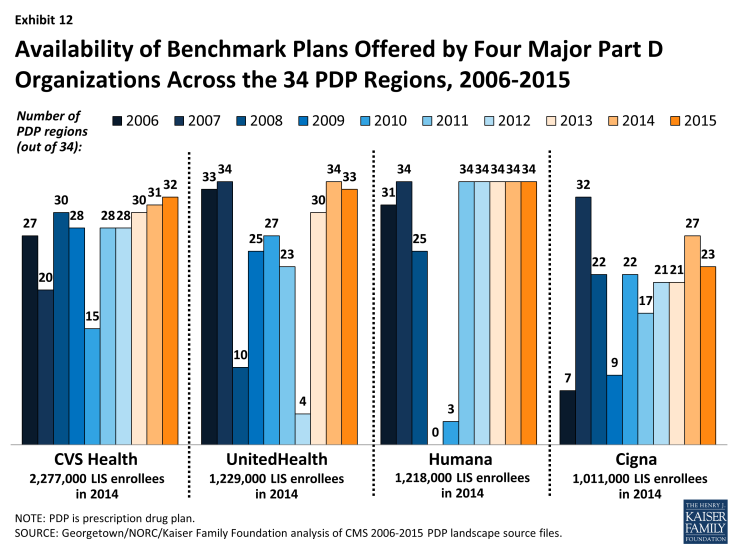 Other Notable Trends for 2015

Three other notable trends characterize the Part D program for 2015:

In 2015, there will be 1,001 Medicare Part D stand-alone prescription drug plans available nationwide, fewer PDPs than in any year since the program began. Beneficiaries will still have many options; the average beneficiary will have a choice of 30 PDPs, and most will also have access to several Medicare Advantage drug plans. The smaller number of plans reflects the combined effect of mergers among Part D plan sponsors and the response of sponsors to CMS policies put in place in recent years encouraging sponsors to eliminate PDPs with low enrollment and to drop multiple PDPs that are not meaningfully different from each other. The reduced set of offerings could make the process of comparing and reviewing plan options somewhat easier for beneficiaries to undertake during the open enrollment period from October 15 to December 7, 2014.

On average, plan enrollees who remain in the same plan will see a modest 4 percent premium increase ($1.56 per month) if they stay enrolled in the same plan in 2015. But the changes affect individual plan enrollees differently. Enrollees in six of the program’s most popular PDPs will experience premium increases of at least 10 percent, and those enrolled in one of these PDPs face an increase of 52 percent. By contrast, enrollees in three other popular PDPs will see substantially lower premiums. About one-third of all PDP enrollees are in plans that will experience a premium reduction in 2015 and about 8 percent of PDP enrollees will see a premium increase of $10 or more.

Although the majority of plans offered in 2015 will offer no gap coverage beyond that which is required by the Affordable Care Act, the presence of this gap coverage is becoming less important as the Medicare Part D “doughnut hole” gradually closes by 2020.

Nationwide, beneficiaries receiving Low-Income Subsidies will have 69 fewer plans available to them for no monthly premium in 2015 than in 2014. This reduction in premium-free plan availability is one reason why nearly one in four LIS beneficiaries will need to change plans between 2014 and 2015 to avoid paying a premium. Although some of the latter group will be reassigned by CMS to benchmark plans, many are likely to stay with their current plans and end up paying premiums for drug coverage in 2015, despite having the option to enroll in a zero-premium plan.

This evaluation of the Part D plan landscape for 2015 and changes over time indicates that many PDP enrollees will face some changes in their current plan, whether in the form of higher or lower premiums, deductibles, cost sharing, pharmacy networks, or other benefit design features. Changes in Part D plan costs and benefit design from one year to the next have been a defining featuring of the program since its beginning. While the annual enrollment period is the best opportunity for people on Medicare to evaluate their coverage options and make changes, our analysis of plan switching showed that about 87 percent of all PDP enrollees stayed in the same plan in annual enrollment periods between 2006 and 2010.12 Even when they were projected to face large premium increases, a majority of PDP enrollees stayed in the same plan from one year to the next. And even when PDP enrollees responded to premium changes by switching plans, they did not always end up with lower out-of-pocket costs for their prescription drug purchases. Finding ways to get more Part D enrollees engaged in comparing and reviewing plans and making changes that could save them money remains an ongoing challenge for CMS and policymakers.

Jack Hoadley and Laura Summer are with the Health Policy Institute, Georgetown University; Elizabeth Hargrave is with NORC at the University of Chicago;
Juliette Cubanski is with the Kaiser Family Foundation.
Introduction Appendix