For people on Medicare, one of the biggest trade-offs between Medicare Advantage and traditional Medicare is that Medicare Advantage plans have a more limited network of doctors and other providers. Medicare Advantage plans restrict the doctors, hospitals, and other providers from whom their enrollees can receive care, while traditional Medicare allows people to see any provider that accepts Medicare (overwhelming majority of providers). Seniors value having the ability to choose their own doctors as well as keep their existing doctors, and say that the doctors in the network are an important factor in their plan selections.1

When forming their networks, insurers may choose to contract with some but not all physicians for a variety of reasons. For example, the insurer may want to have greater control over the cost or quality of care provided by a physician or they may prefer to limit the number of physicians included in their network for other reasons. Curating and restricting their provider networks may also allow insurers to improve the coordination and efficiency of care for their enrollees.

At the same time, physicians may or may not want to be a part of a Medicare Advantage network. They may not want the extra paperwork and time that may come with accepting another insurer, may not want additional patients, or may have concerns with a plan’s payment rates or other terms of a given plan’s contract.

This report is the first known study to examine the size and composition of Medicare Advantage plans’ networks, focusing on physicians. This analysis draws upon data from 391 plans, offered by 55 insurers, in 20 counties, accounting for 14 percent of all Medicare Advantage enrollees nationwide in 2015. The report analyzes the size of provider networks across and within the 20 counties, overall and by specialty, and looks at the relationship between network size and other plan features, including plan types, premiums, star ratings, and insurers. We defined Medicare Advantage networks as broad if they included 70 percent or more of the physicians in a county, medium if they included between 30 and 69 percent of the physicians in a county, and narrow if they included less than 30 percent of the physicians in a county.

Growing evidence indicates that many plans do not maintain accurate directories.5 For example, in an investigation, CMS found that the directories had many errors and 45 percent of the doctors listed had incorrect information in plans’ directories.6 Unlike CMS, we do not assess the accuracy of the directories, nor do we assess whether the physicians in the directories actually accept the insurance. 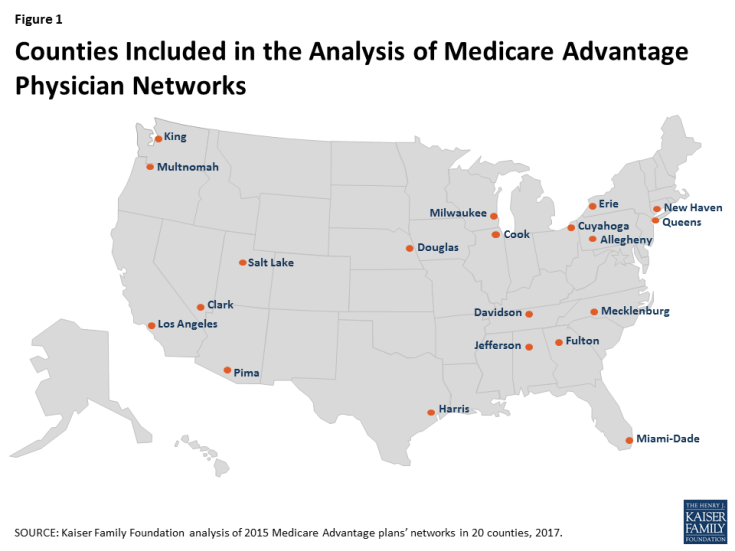 We categorized networks into one of three sizes based on the share of physicians in the county that were included in the directory: broad (70% or more of the physicians), medium (30-69% of the physicians), and narrow (less than 30% of the physicians). These categories are the same as those used in a prior analysis of Medicare Advantage hospital networks, and are the same cut-offs that were used in a McKinsey & Company report examining ACA Marketplace networks.7 The analysis included the 26 physician specialties that Medicare Advantage plans were required to include in their networks, and excluded all other specialties. For a more detailed description of the study methods, see the Appendix. 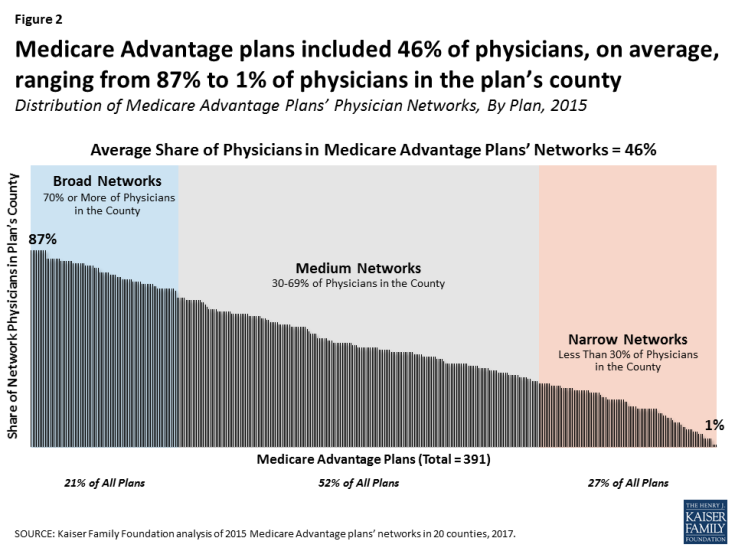 Figure 2: Medicare Advantage plans included 46% of physicians, on average, ranging from 87% to 1% of physicians in the plan’s county 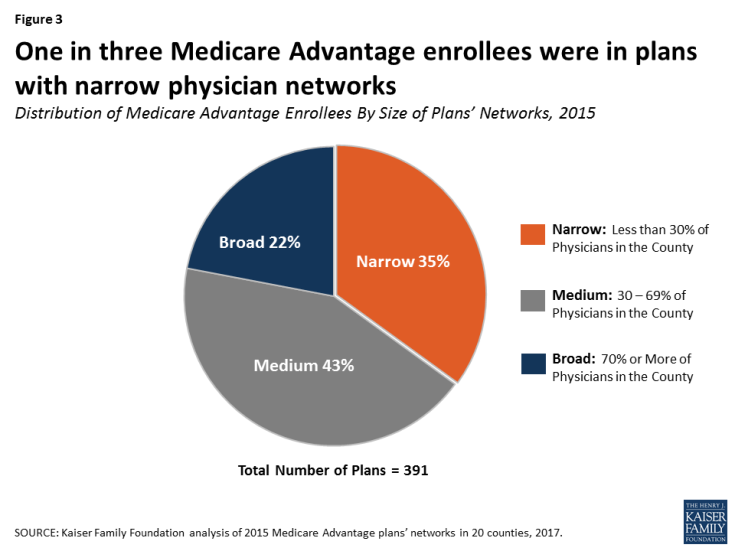 Figure 3: One in three Medicare Advantage enrollees were in plans with narrow physician networks 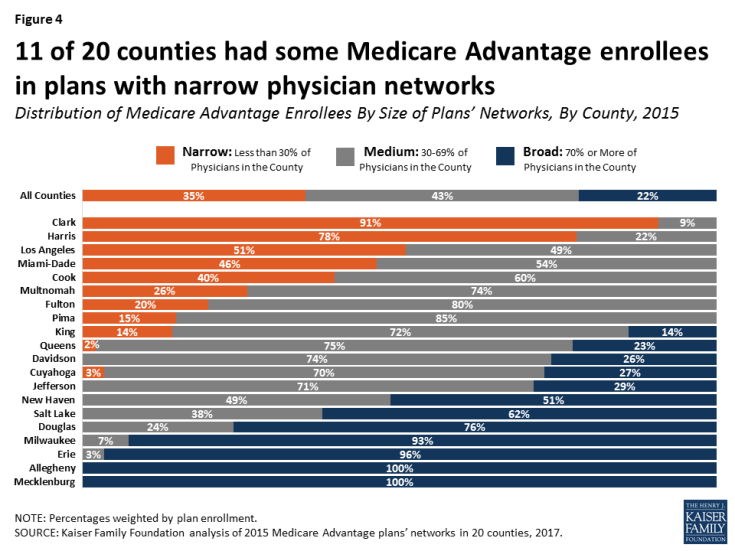 Figure 4: 11 of 20 counties had some Medicare Advantage enrollees in plans with narrow physician networks 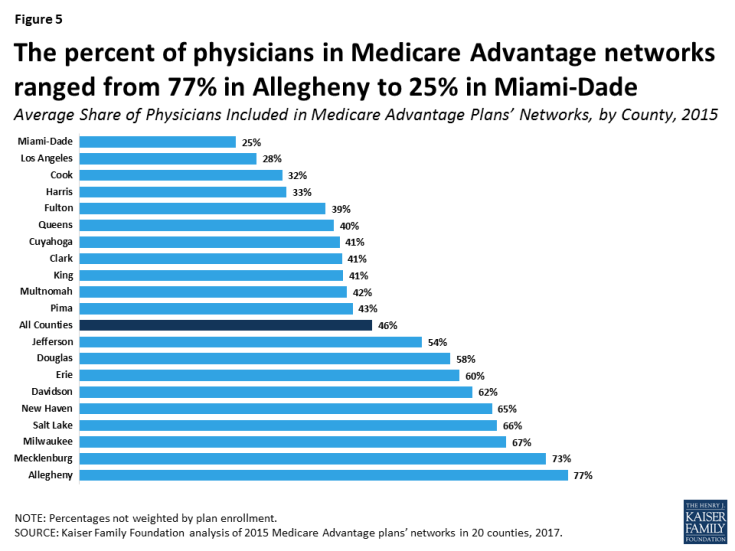 Figure 5: The percent of physicians in Medicare Advantage networks ranged from 77% in Allegheny to 25% in Miami-Dade 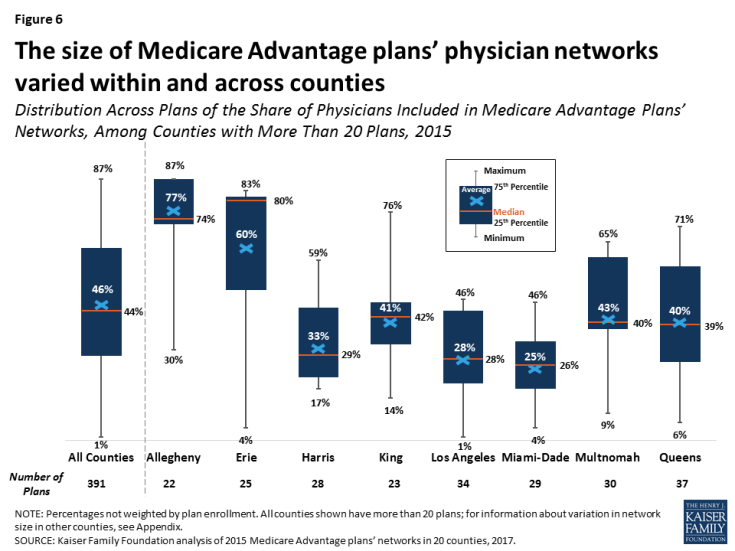 Figure 6: The size of Medicare Advantage plans’ physician networks varied within and across counties 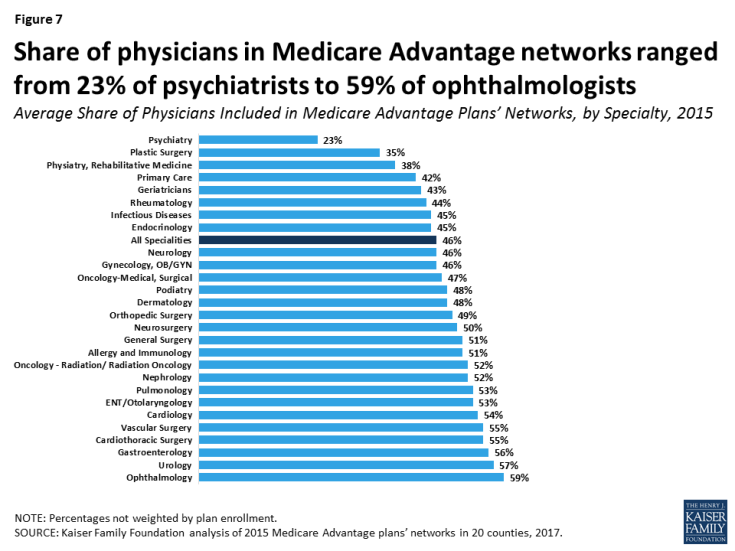 Figure 7: Share of physicians in Medicare Advantage networks ranged from 23% of psychiatrists to 59% of ophthalmologists 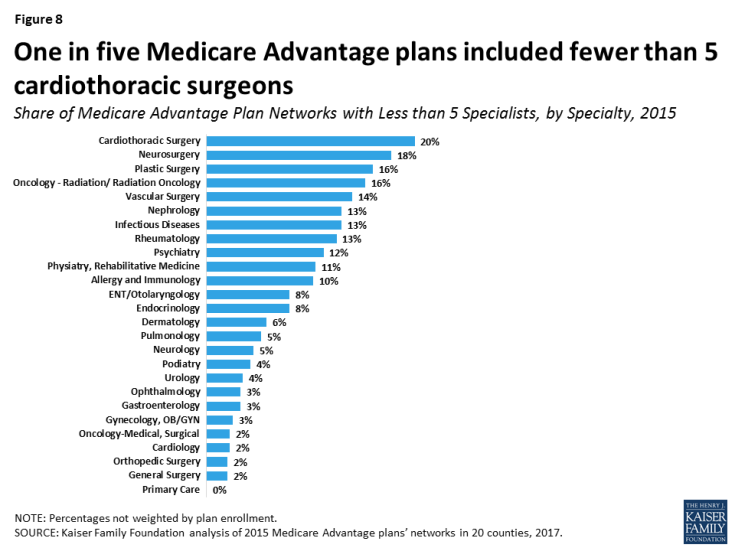 Ratio of Enrollees to Network Physicians 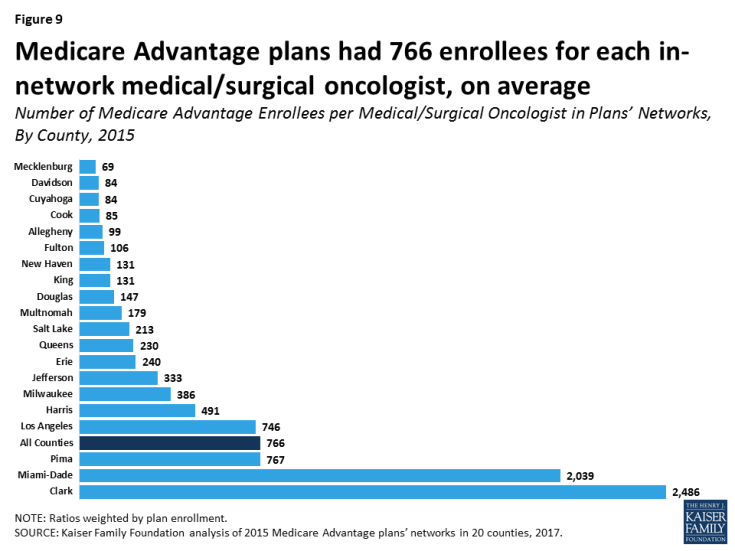 Figure 9: Medicare Advantage plans had 766 enrollees for each in-network medical/surgical oncologist, on average

These ratios supplement our overall analysis of network size in Medicare Advantage, but they do not, on their own, provide specific information about network adequacy for patient access to care. Without information on physicians’ actual caseloads (including Medicare Advantage, commercial insurance, Medicaid, and traditional Medicare patients), it is not possible to assess if counties with high enrollee-to-physician ratios indicate access issues. Nonetheless, Medicare beneficiaries in plans with higher ratios have fewer physicians per enrollee listed in their plans’ provider directories. Additionally, counties with higher shares of narrow-network plans tended to have higher ratios of enrollees to network physicians, which suggests a relationship between narrow networks and high enrollee-to-physician ratios.

Relationship Between Size of Plans’ Networks and Other Plan Features 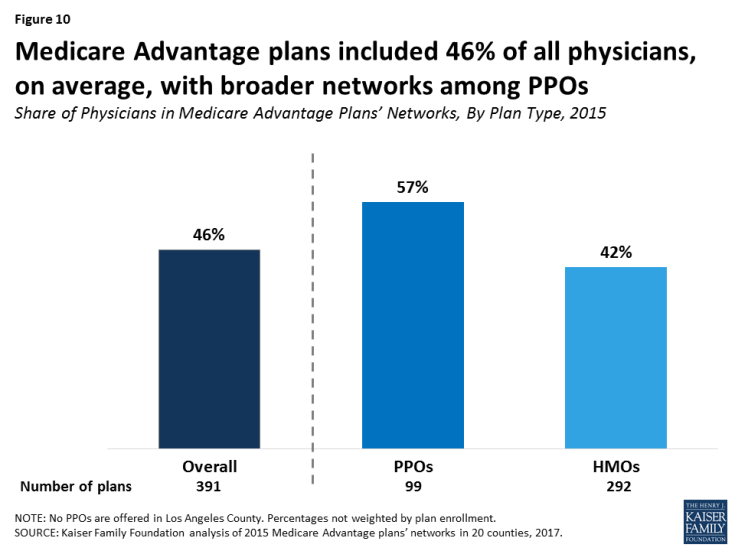 Figure 10: Medicare Advantage plans included 46% of all physicians, on average, with broader networks among PPOs

These results held across most counties, with the HMOs in most of the counties having narrower networks than PPOs, on average (Table A5). The differences between HMO and PPO networks are diluted by the fact that a number of insurers use the same network for their Medicare Advantage HMO and PPOs in a given county. Among PPOs offered by insurers that also offered an HMO in the county, 44 percent had the same provider network as the insurer’s HMO.12

Broad-network plans tended to have higher average premiums than narrow-network plans, and this was true for both HMOs ($54 versus $4 per month) and PPOs ($100 versus $28 per month; Figure 11). 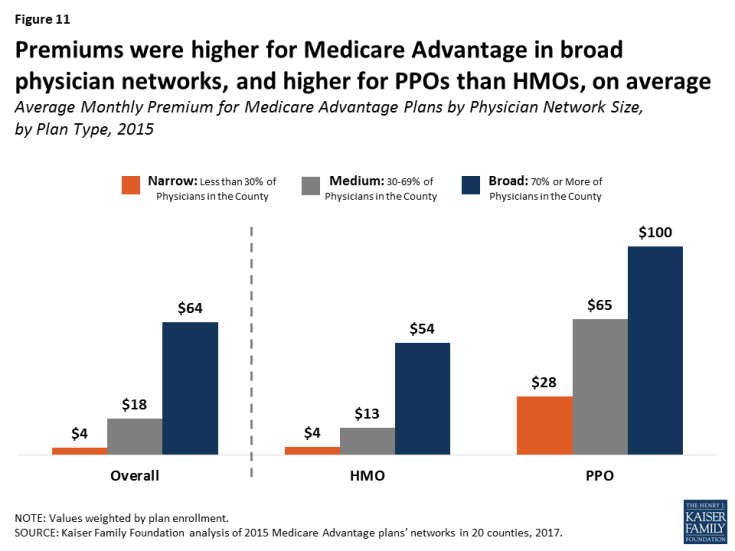 Figure 11: Premiums were higher for Medicare Advantage in broad physician networks, and higher for PPOs than HMOs, on average 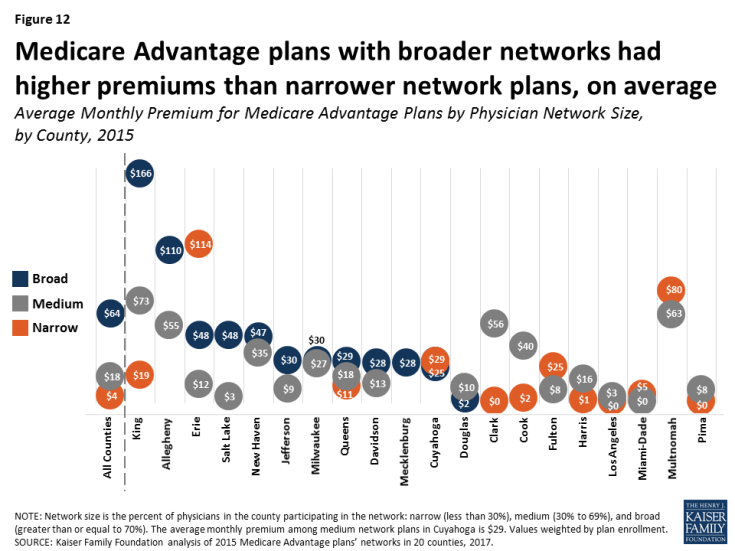 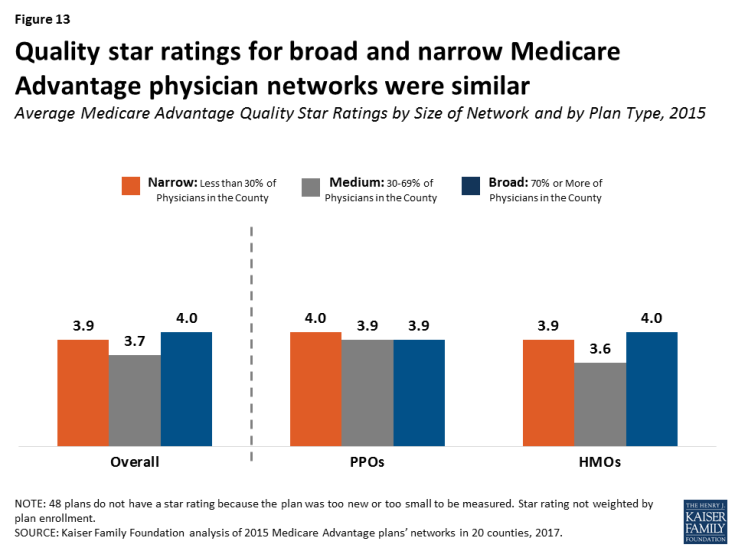 Variations in Networks By Insurer

Among the insurers offering plans in multiple counties, none consistently had broad or narrow networks. For example, while UnitedHealthcare had broad networks in Douglas, Mecklenburg, Milwaukee, Queens, and Salt Lake Counties, it had narrow networks in Clark, Harris, and Miami-Dade Counties. Likewise, Blue Cross Blue Shield (BCBS) affiliated plans had broad networks in seven counties (Allegheny, Davidson, Erie, Jefferson, King, Mecklenburg, and Salt Lake), but narrow physician networks in three counties (Harris, King, and Los Angeles). This finding suggests that local market characteristics typically are a stronger influence on network design than the philosophy or general practices of particular insurers. For consumers, this finding suggests caution against assuming a given insurer’s brand is a reliable proxy for network size.

It is possible that specific local market characteristics that we could not measure, such as provider consolidation or the dominance of certain insurers in an area, are related to the size of networks. For example, in Clark County, most (55% in 2015) enrollees are in plans operated by UnitedHealthcare, which has relatively narrow networks in the county because it owns (through its Optum subsidiary) a large medical group that comprises most of its network.14

The CMS Medicare Plan Finder, designed by CMS to help Medicare beneficiaries and others choose among competing plans, currently includes a link to each Medicare Advantage plan’s website, where beneficiaries can find a downloadable provider directory and/or a searchable database. Motivated consumers could check the directory or database to see if their doctors are included in the plan’s network. However, accessing the information may not be easy for users, and comparing networks could be especially challenging. Additionally, as was found in the prior analysis of Medicare Advantage hospital networks, as well as other studies, the information in the directories is often inaccurate.15

The Medicare Plan Finder also posts an estimate of the total number of providers in the network, but the total includes physicians as well as other providers, such as hospitals, nurses, skilled nursing facilities, and laboratory testing sites. This estimate would not be helpful for Medicare beneficiaries who are looking to see if the plans available to them have a narrow or broad physician network. Further, the estimated number of providers displayed on the CMS website for each plan does not necessarily cover the same geographic area because some plans cover much broader areas than others. For example, the estimate for one plan may include the number of in-network providers in a county while the estimate for another plan may include the number of in-network providers in a state, the latter of which may or may not be useful for beneficiaries who may need to travel a great distance to see some of the in-network providers. As a consequence, the number of providers posted on the Medicare Plan Finder may not be particularly useful for people who are trying to compare plans to figure out how many physicians (or other providers) are available in-network in the area where they live.

The results of this analysis, the first known study of Medicare Advantage physician networks, has important implications for the 19 million Medicare beneficiaries now enrolled in Medicare Advantage plans, and for the millions of Boomers who are becoming eligible for Medicare and choosing between traditional Medicare and Medicare Advantage plans.16 A prior analysis showed that Medicare Advantage hospital networks vary greatly in size and composition.17 The breadth and scope of provider networks has the potential to affect out-of-pocket costs and quality of care for Medicare enrollees. Medicare Advantage enrollees incur higher costs if they go out-of-network without prior approval in Medicare PPOs, and pay the full cost for out-of-network care in Medicare HMOs. With half of all Medicare beneficiaries living on an income of about $26,000 or less per person in 2016,18 the cost of out-of-network care could be prohibitively expensive. Provider networks can also be an important consideration for beneficiaries who value the ability to maintain care arrangements with specific physicians, or have access to certain specialists if they develop a serious medical condition. Many seniors as well as younger people find it difficult to navigate complex networks and incur “surprise” medical bills because they unintentionally went out of their plan’s network.19

Seniors say they value having the ability to choose their own medical providers, and that provider networks are a key factor in choosing a health plan.20 Yet, seniors would be hard-pressed to compare the Medicare Advantage plan provider networks in their area to learn which have broad or narrow physician networks. The Medicare Plan Finder includes an estimate of the number of physicians and other providers in a plan’s network, but these estimates are not a reliable proxy for the relative size of a plan’s physician network.

This report documents that Medicare Advantage plans’ networks vary across the country and within counties – to a degree and in a manner that has not been previously recognized. The extent of this variation raises important questions about the experiences of current and future enrollees who unwittingly end up in narrow-network plans, as a result of their inability to evaluate plans’ provider networks. These wide variations in provider networks are also important for policymakers because they raise questions about the minimum standards for physician access and the lack of tools and resources to allow Medicare beneficiaries to compare the scope and composition of Medicare Advantage plans’ provider networks.