The latest Kaiser Health Tracking Poll, conducted October 17-23,  finds that the public reported paying more attention this month to the political fights over the government shutdown and raising the debt ceiling than technical problems with the opening of the online federal health insurance exchange created by the Affordable Care Act (ACA). As the rollout of the law and website problems made headlines, most Americans give the federal government fair or poor ratings when it comes to implementing the law, while ratings of their own state governments are only slightly better. Despite all this, public opinion on the law holds steady in this month’s tracking poll (44 percent unfavorable versus 38 percent favorable). A majority continues to oppose defunding the ACA, and more want Congress to expand it or keep the law as is rather than repeal it. As enrollment outreach efforts continue to ramp up, visibility of ACA-related advertising increased this month, particularly for ads providing information about how to get coverage under the law, and for the first time in Kaiser tracking the share saying they saw ads providing information about coverage is nearly equal to the share saying they saw ads for and against the law. This month, the share of the public who feel they have enough information about the law to understand how it will impact their family edged up by 8 percentage points to 55 percent, though over half of the uninsured continue to say they don’t have enough information.

The ACA has made its share of headlines in October, both for its role as a political football in the budget debate in Washington and for technical problems with the opening of the online health insurance marketplaces. The latest Kaiser Health Tracking Poll (which was in the field immediately after the end of the partial government shutdown) finds that the public reports paying more attention to the former rather than the latter. More than four in ten (44 percent) say they have followed the fight over the federal government shutdown and raising the debt ceiling “very closely,” while half that many (22 percent) say they’ve paid close attention to news about the website problems with the insurance exchanges. 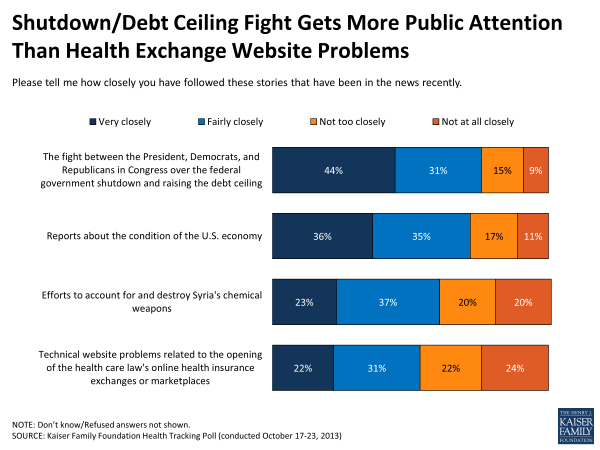 This relatively lower level of attention to the website “glitches” doesn’t mean the public hasn’t picked up on the fact that the ACA has had a rocky roll-out so far. Nearly half (48 percent) say the federal government is doing a “poor” job implementing the law, a share that rises to six in ten among those who followed news of the website problems very closely. State governments receive slightly higher ratings from the public, but still the majority rate their state’s handling of implementation as fair (34 percent) or poor (29 percent). 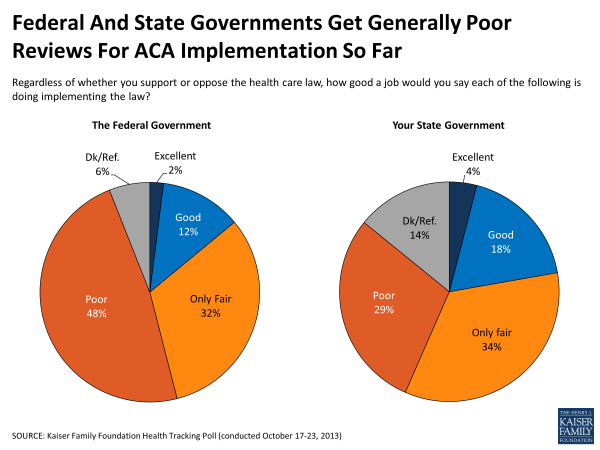 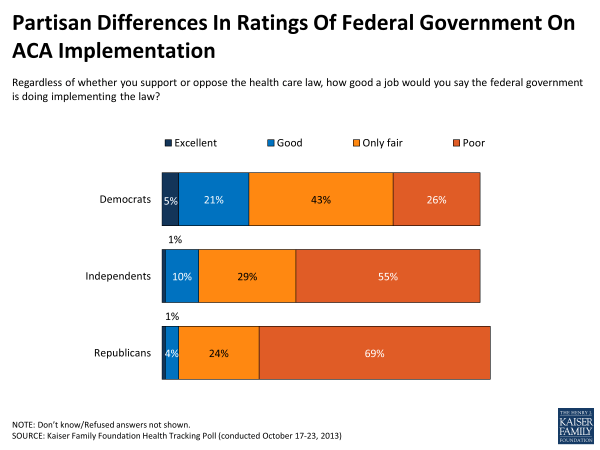 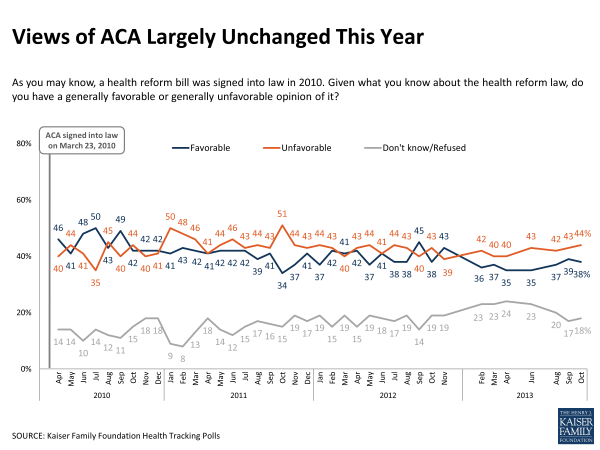 A solid majority of the public (60 percent) say they oppose the idea of cutting off funding as a way to stop the law from being implemented, and a higher share would like to see Congress expand the law or keep it as is (47 percent) rather than repeal it (37 percent). Partisan divisions are as deep as ever, with four in ten Democrats saying the want Congress to expand the law, and a similar share of Republicans (42 percent) wanting to see the law repealed and not replaced. 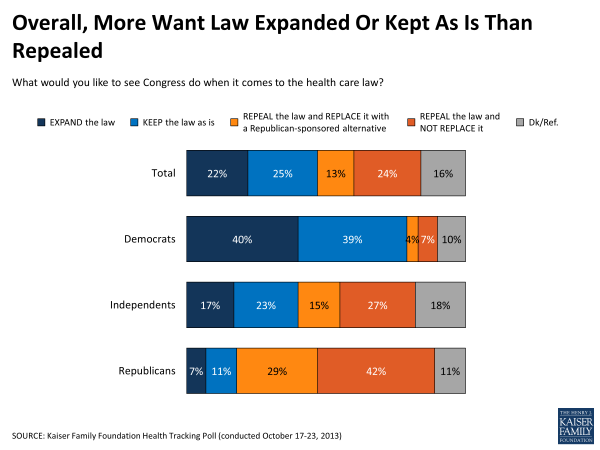 More Report Seeing ACA-Related Ads, But Personal Outreach to Uninsured Is Low At This Point

As enrollment outreach efforts continue to ramp up across the country, there was a large increase over the last month in the share of the public that report seeing ACA-related advertisements, particularly those that provide information about how to get insurance coverage. In October, 59 percent say they saw some type of ad or commercial about the health care law in the past 30 days, up from 43 percent in September. This includes 36 percent who say they saw ads that provided information about how to get coverage, more than double the share who said so last month (17 percent). For the first time in Kaiser tracking, the share saying they saw ads providing information about coverage is nearly equal to the share saying they saw ads for and against the law (38 percent each). 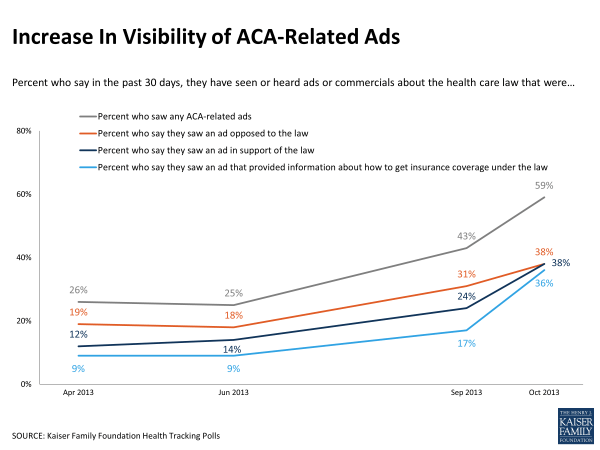 Among the uninsured, a key target group for enrollment outreach, the share saying they saw ads that provided information about how to get coverage under the law also increased, from 18 percent in September to 31 percent in October. Still, the survey shows that targeted outreach efforts to the uninsured are just beginning. This month, 2 percent of the uninsured say they have personally been contacted by anyone about the health care law through a phone call, email, text message, or door-to-door visit.

Share Who Feel They Have Enough Information Ticks Up This Month

Most of the public (64 percent) continues to say that they haven’t been personally impacted by the health care law so far, though the share saying they’ve been negatively impacted is somewhat higher than the share who feel they’ve personally benefited (23 percent versus 14 percent). The most commonly reported positive impacts are expanded access to insurance, extension of dependent coverage, and lower costs, while the most commonly reported negative impact is increased costs, followed far behind by impacts on one’s job or business and changes to insurance benefits. 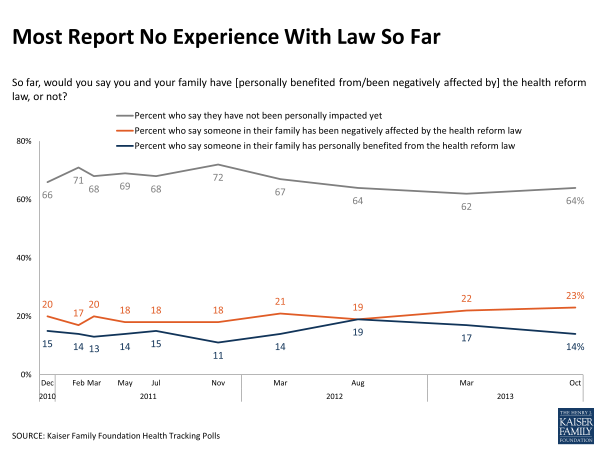