With many of the Affordable Care Act’s (ACA) major provisions taking effect this past year, such as the individual mandate and coverage expansions through Medicaid and the health insurance marketplaces, the December Kaiser Health Tracking Poll finds that many Americans are aware of the main parts of the law and, with the exception of the individual mandate, at least 6 in 10 feel favorably towards them. However, as the employer requirement takes effect in January for firms with 100 or more workers, Americans’ initial opinions of the provision are malleable, particularly if they hear it may cause some employers to move workers from full time to part time. Similarly, opinions on the individual mandate can change when more information is provided.

Despite the individual provisions receiving high marks, opinion of the law overall remains stable with 46 percent reporting an unfavorable view and 41 percent reporting a favorable view. The public is fractured over what Congress should do next with the law with 3 in 10 preferring repeal, about 1 in 10 saying they would like Congress to scale back the law, a fifth saying they want implementation to continue, and a quarter favoring expanding the law. Americans give a wide variety of answers when asked to say in their own words what the law does, but about 4 in 10 say that it expands access to health care and health insurance. And, about one month into the ACA’s second open enrollment period, the poll finds the vast majority of the uninsured don’t know the deadline to enroll, most expect to get health insurance in the next few months, and nearly two-thirds say they don’t think they’ll have to pay a fine, or don’t know if they will, for not having coverage this year.

The Public’s Views On The Eve Of The Employer Requirement

But, opinion on the employer mandate is not fixed and there is some room for movement. After providing those in favor of the employer mandate with the statement that “some employers are moving some workers from full time to part time to avoid paying the fine,” the share with an unfavorable opinion rises from 38 percent to 68 percent.

In contrast, when those with unfavorable views of the employer mandate are provided with the statement that “most employers with 100 or more workers already offer health insurance and won’t have to pay the fine,” the share with a favorable view of the employer requirement rises from 60 percent to 76 percent. 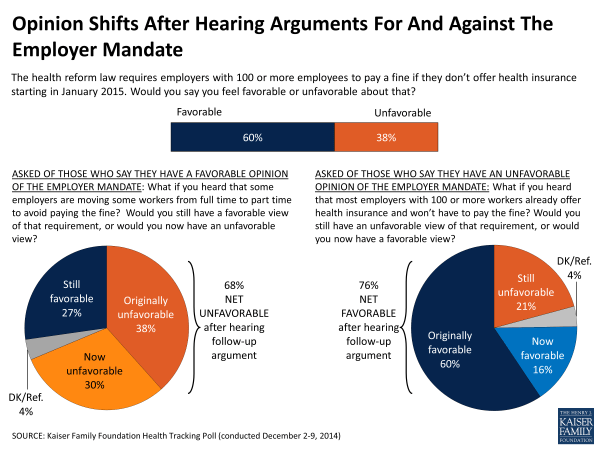 A Focus On The Individual Mandate

This year marks the first year the individual mandate was in effect, requiring nearly all Americans to have health insurance or else pay a fine.  The public generally holds an unfavorable view of this provision (64 percent), but some report a favorable view of it (35 percent). However, like in the case of the employer mandate, opinion on the individual mandate is somewhat malleable. The most persuasive message of those tested to move opponents to supporters is the reminder that “most Americans still get coverage through their employers or a public insurance program and so automatically satisfy the requirement without having to buy any new insurance.”  Upon hearing this, about 6 in 10 (62 percent) have a favorable view of the requirement to have coverage. Other statements also move opinion more favorably on the individual mandate and over the 50 percent mark, including mention of the hardship exemptions (59 percent), the fact that without the mandate people may wait to buy insurance until they’re sick resulting in higher costs for others (54 percent), and that without such a requirement insurers may deny coverage to those who are sick (51 percent). Being told the actual amount of the fine is not as influential in terms of changing people’s views and leaves about four in 10 (41 percent) with a favorable view of the provision. 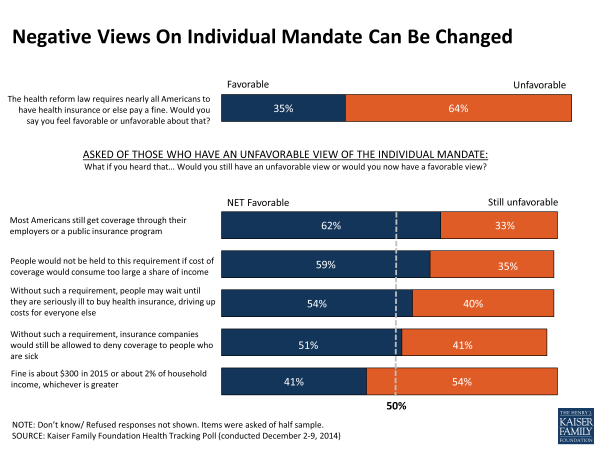 Alternatively, some who originally hold favorable views of the provision can also be moved to view the requirement unfavorably. The share with an unfavorable view of the mandate goes up from 64 percent to three-quarters or more after hearing that “requiring all Americans to have health insurance could mean that some people would be required to buy health insurance that they find too expensive or didn’t want” or after hearing the amount of the fine. 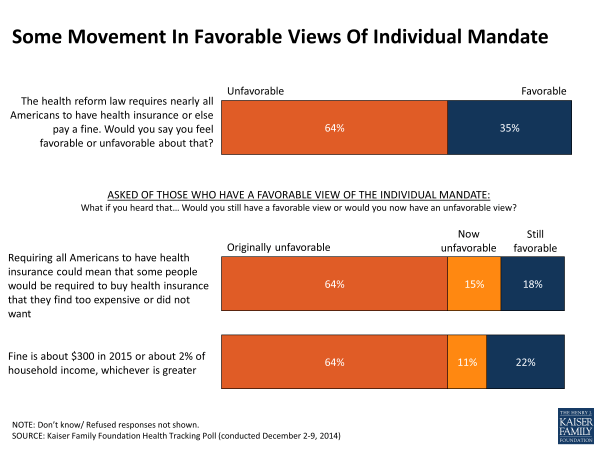 Views Of The ACA One Year Into Coverage Expansions

The ACA In Their Own Words

When asked to say in their own words the main thing the law does, 4 in 10 (41 percent) say it expands access to health care and health insurance, with some naming specific groups such as those with lower incomes (7 percent) and the uninsured (5 percent) that stand to benefit from increased access. Many fewer say the law increases costs or makes insurance too expensive (8 percent), requires people to purchase insurance (7 percent), helps them personally or people generally (7 percent), or that it makes health care more affordable (5 percent).

Opinion On The ACA Remains Stable 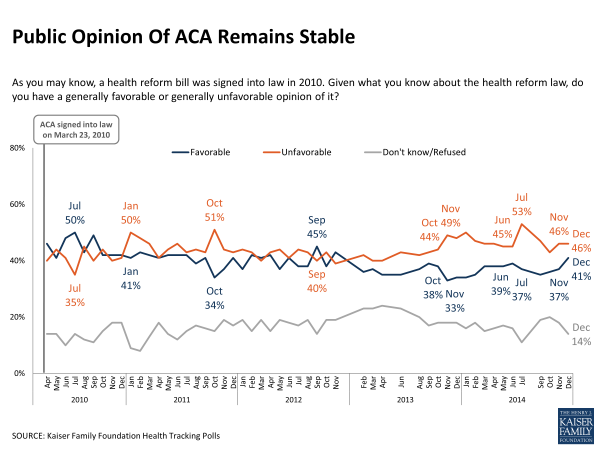 The Public Is Divided On What Next 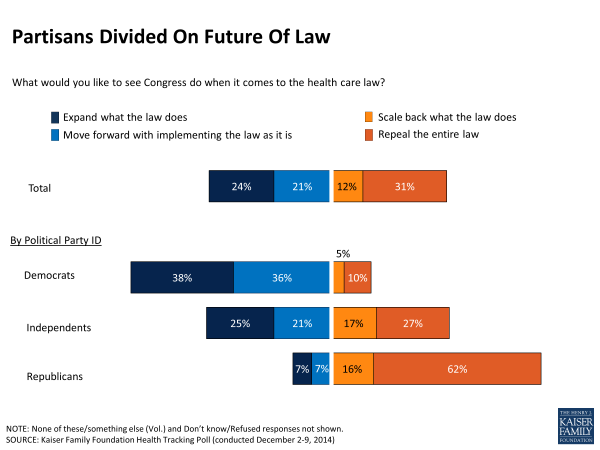 A Closer Look At Awareness And Views Of Specific ACA Provisions

While opinion on the law overall remains negative, large shares of Americans report feeling favorably toward a number of the law’s specific provisions, including the creation of the marketplaces where people can shop for and purchase coverage (78 percent), the financial assistance available to low- and moderate-income people (76 percent), the option for states to expand their Medicaid programs (75 percent), and, as noted earlier, the requirement that employers with 100 or more full time workers offer coverage or pay a penalty (60 percent).  And, while Republicans are relatively unified in their dislike of the law overall, at least half say they have favorable opinions of the provisions that create marketplaces (66 percent), provide financial assistance (55 percent), and allow for the expansion of Medicaid (52 percent).  Support drops off considerably among Republicans for the employer mandate (34 percent), compared to majorities of Democrats (78 percent) and independents (61 percent).

A clear exception to the favorable views of several of the law’s provisions is in views of the requirement that nearly all Americans have insurance or else pay a fine.  Nearly two-thirds (64 percent) say they have an unfavorable opinion of this provision, including 45 percent who say they feel “very unfavorable.”

In addition to viewing most of these provisions favorably, many people also recognize that these elements are included in the law. The most widely recognized provision is the individual mandate (77 percent), but still roughly two-thirds are aware that the law requires employers with 100 or more employees to offer coverage or else pay a fine (69 percent), creates marketplaces (67 percent), provides financial assistance to low- and moderate-income individuals (67 percent), and gives states the option to expand the Medicaid program (62 percent). 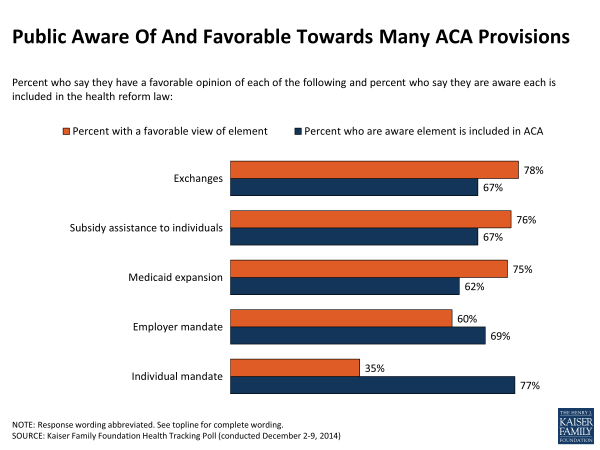 While the public recognizes many of the law’s main provisions, they are less familiar with the law’s practical implications, such as the fine for not having health insurance. Over 7 in 10 (72 percent) say they do not know what the fine will be for people who do not get insurance in 2015, and another 19 percent say some amount other than the 2014 or 2015 actual amounts. Six percent reported the 2014 amount ($95 per person or 1% of household income), and just 3 percent responded with an amount similar to the 2015 fine of $325 per person or 2% of household income. 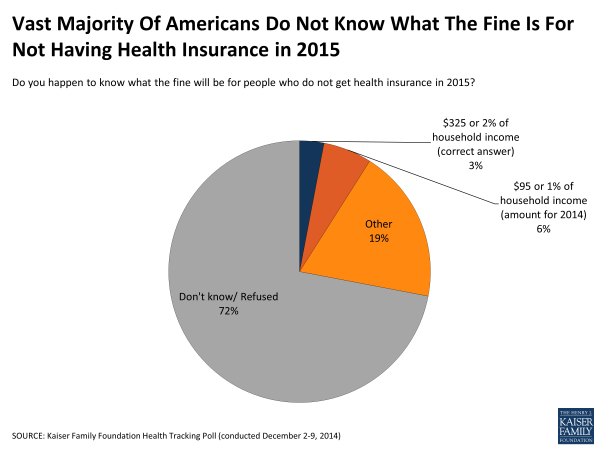 Americans also continue to hold misperceptions about some aspects of the law.  For example, about 4 in 10 say the law allows undocumented immigrants to receive financial help from the government to buy health insurance or that it establishes a government panel to make decisions about end-of-life care for people on Medicare, and another 2 in 10 say they are unsure if the law does these things.

A Look At The Uninsured

About a month into the ACA’s second open enrollment period, very few of the uninsured (5 percent) are aware that the deadline to enroll is February 15 and 13 percent believe the deadline is the end of 2014. A majority of the uninsured explicitly say they don’t know when the deadline is (57 percent), give a date outside of this year’s open enrollment period (12 percent), or say the deadline already passed or that there is no deadline (12 percent). The vast majority of the uninsured are also unaware of what the fine for not having health insurance will be in 2015. Just 3 percent respond with an amount similar to the 2015 fine, while the rest provide an amount similar to the 2014 fine (7 percent), some other amount (17 percent), or say they don’t know (74 percent). 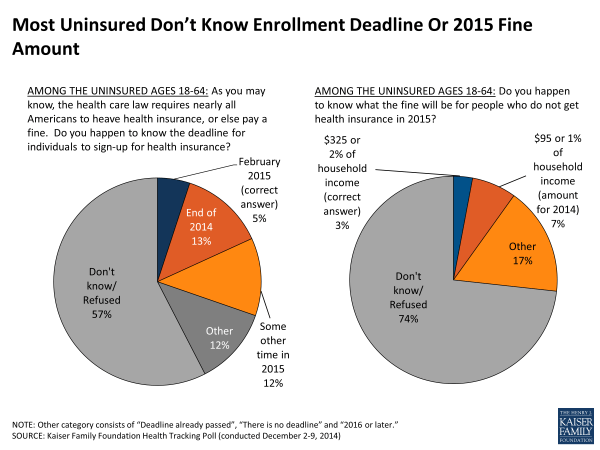 While many uninsured don’t know the fine amount, a little over a third of the uninsured (37 percent) expect to have to pay a fine for not having coverage this year, while over 4 in 10 say they will not (44 percent) and 19 percent say they don’t know. In fact, many uninsured may be exempt from paying a fine due to financial hardship or other exemptions under the law. 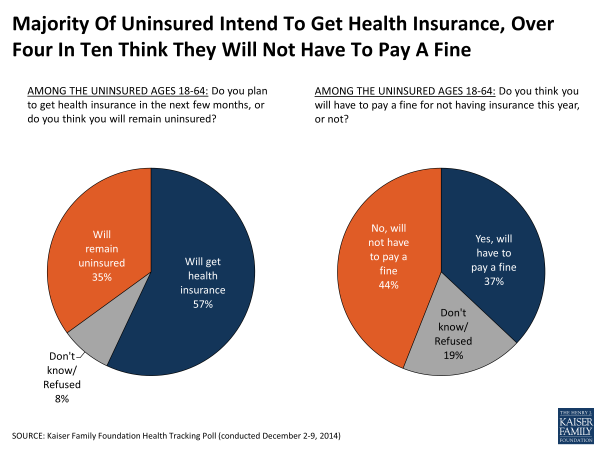