The Latest Kaiser Health Tracking Poll finds a 13 percentage point rebound in support for the Affordable Care Act (ACA) among Democrats this month, but no overall movement in support or opposition to the ACA since the November poll found a negative shift in views following the problem-plagued rollout of the law. In December, 34 percent have a favorable view of the ACA and 48 percent have an unfavorable view.  The share of Americans that expect to see no personal impact from the law reached a new high in Kaiser polling this month and now stands at nearly half the public. Still, the public is more likely to attribute negative consequences to the law (believing it has increased the federal deficit and caused many people to lose their insurance coverage) than to say it has had positive effects (such as lowering prescription costs for seniors, eliminating cost-sharing for preventive services, and providing rebates to consumers whose health plans spent too much on administration).  Americans are divided on what they would like Congress to do next with the law, with about four in ten wanting the law to be expanded or kept as is and a similar share wanting to see it repealed (either being replaced with a Republican alternative or repealed and not replaced). This month’s survey also highlights some of the problems the uninsured continue to experience in accessing and paying for health care; for example, the uninsured are about twice as likely as those with insurance to report problems paying medical bills, and four times as likely to say they had trouble getting medical care in the past year.

Overall Views Remain The Same As In November, Despite Rallying Support From Democrats

The latest Kaiser Health Tracking Poll finds that in December, about a third (34 percent) of the public has a favorable view of the ACA, while nearly half (48 percent) view the law unfavorably, shares that are largely unchanged from November.  Support rallied this month among Democrats – 68 percent of them now express a favorable view of the law, up from 55 percent last month. 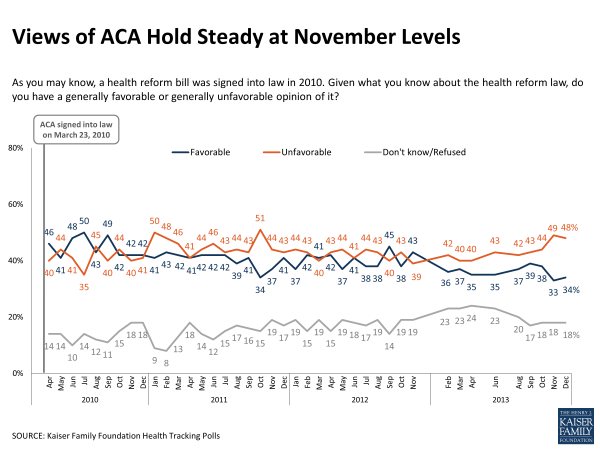 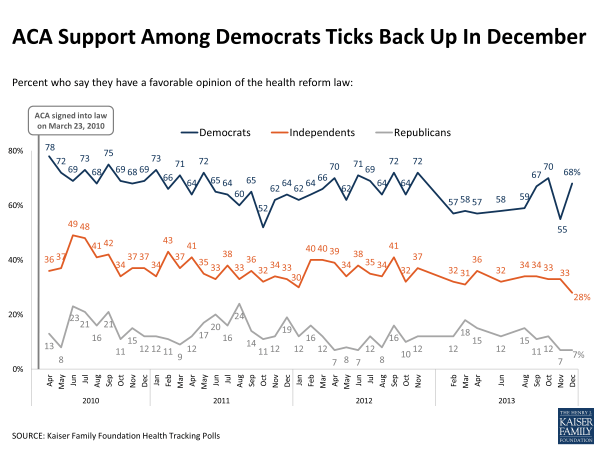 This month’s poll did not find a similar rebound in support among independents who say they lean toward the Democratic Party. In previous polls, this group’s views have pretty closely mirrored those of Democrats, but while the share of Democrats with a favorable view of the ACA jumped 13 percentage points from November to December, the share of Democratic-leaning independents viewing the law favorably was flat (49 percent in December, the same share measured in the November poll).

Views of the law continue to be overwhelmingly negative among both Republicans and Republican-leaning independents. Among “pure” independents this month (those who say they don’t lean towards either party), unfavorable views outnumber favorable ones by a margin of two to one (52 percent unfavorable versus 25 percent favorable).

Views also continue to tilt negative among women this month – a group that had historically been more evenly split on the law but shifted negative in November. This month, 49 percent of women have an unfavorable view of the ACA and 35 percent have a favorable view. This is similar to the split among men (32 percent favorable, 48 percent unfavorable).

When those with an unfavorable view of the law are asked why they feel this way, the most common responses have to do with concerns about costs (23 percent of those with an unfavorable view), opposition to the law’s individual mandate (18 percent), and concerns about the role of government (13 percent). Smaller shares say they are opposed to the process by which the law was passed or that individuals should have to pay for their own insurance (7 percent each). Two issues that have recently been in the news were each mentioned each by 6 percent as a reason their views are unfavorable: employers cancelling health insurance policies and a sense that the government hasn’t delivered on its promises.

Among those with a favorable view of the law, by far the most common reasons given have to do with the fact that the law will expand access to health care and insurance (57 percent). Just under one in ten of those with a favorable view also mention a belief that the law will control or decrease health care costs (9 percent), help people with pre-existing conditions (8 percent), and leave the country better off in general (7 percent).

The public is divided this month on what it would like to see Congress do next with the law. Just over four in ten (42 percent) want to see the law repealed (including 16 percent who want it replaced with a Republican alternative and 26 percent who want it repealed and not replaced), while a similar share (43 percent) want Congress to expand the law (23 percent) or keep it as is (20 percent). This is a shift from October, when those who wanted to keep or expand the law outnumbered those who wanted to repeal it by a 10-point margin. 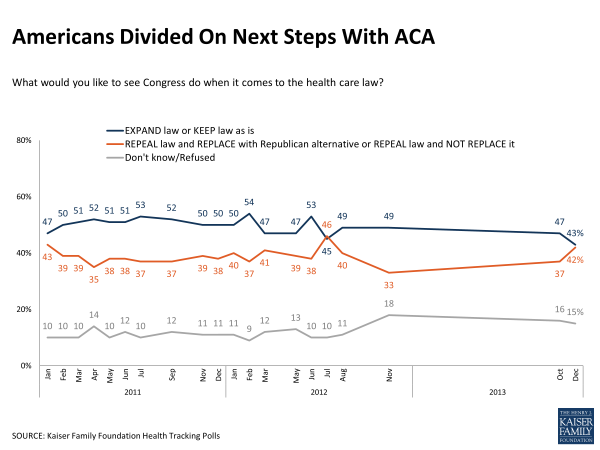 In terms of views of what the law has accomplished so far, Americans are more likely to attribute negative rather than positive consequences to the ACA. Perhaps reflecting the recent focus on policy cancellations in the non-group market, six in ten believe the law has caused many people to lose their health coverage (61 percent), and a similar share believe it has increased the federal budget deficit (57 percent). These beliefs reflect deeper divisions on the law, as Republicans and those with an unfavorable view of the law are much more likely to attribute these consequences to the ACA than are Democrats and those with a favorable view.

When it comes to positive consequences, about half think the law has allowed many young adults to obtain coverage (48 percent), and a similar share believe the law has already reduced the number of people who are uninsured (45 percent). The public is less likely to think the law has lowered prescription drug costs for seniors (29 percent say the law has done this, including 22 percent of seniors), eliminated cost-sharing for preventive services (29 percent), helped slow down the rate of increase in health care costs (28 percent), and provided refunds for consumers whose health plans spent too much on administrative costs (21 percent). Democrats are more likely than Republicans and independents to attribute these positive consequences to the law, but still more than half of Democrats say the law has not done each of these four things or they are not sure if it has. 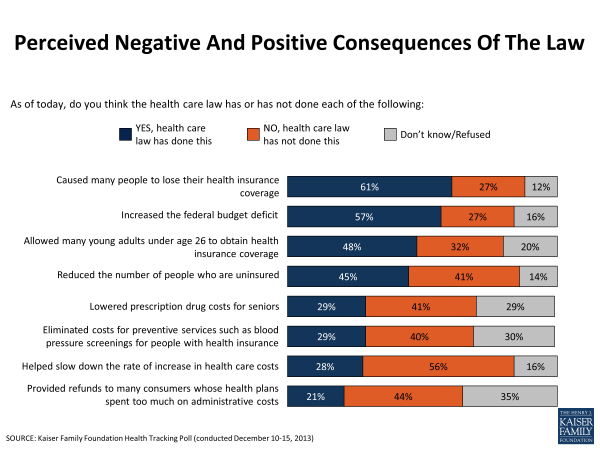 On a personal level, the share of the public saying they expect the law won’t make much difference for their own families reached a new high in Kaiser tracking this month. Nearly half (47 percent) now say they don’t expect the law to impact them, up from 41 percent last month. As to whether they’ve already been impacted, nearly two-thirds (64 percent) say they haven’t been helped or hurt by the law so far, while about a quarter say they’ve been negatively affected and one in nine say they’ve benefited from the law. 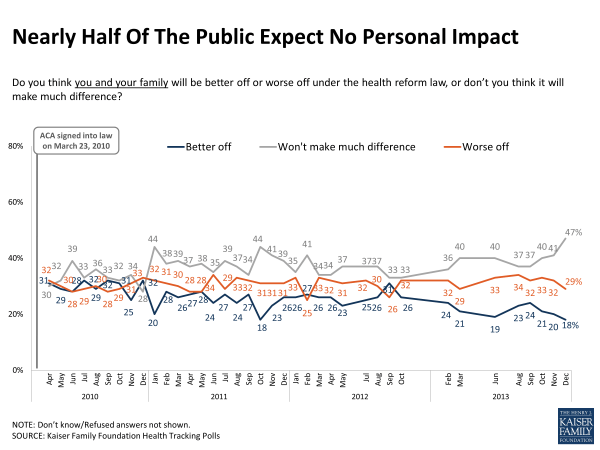 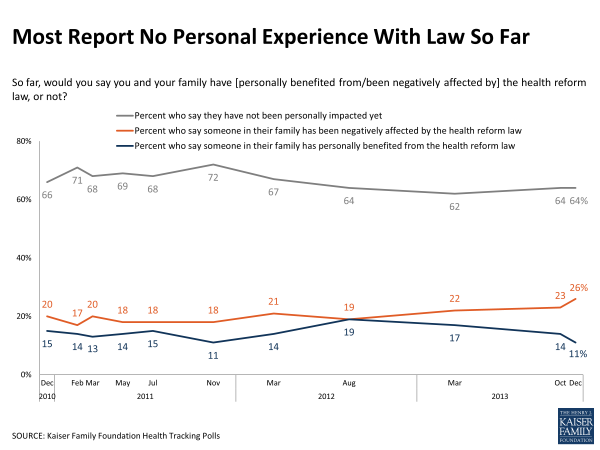 Among those who say they’ve been negatively affected by the law, most (59 percent) point to concerns about health care costs as the specific way in which the law has hurt them. Just over one in ten mention cuts in benefits or scaled-back choices (13 percent), while ten percent mention coverage cancellations (either that they or someone they know has had their coverage cancelled, or that they fear their coverage will be cancelled because of the law). Among those who feel they’ve been helped by the law, nearly half (47 percent) mention expanded access to health care or benefits, while a quarter (25 percent) point to lower health care costs and 12 percent mention the extension of dependent coverage to adults under age 26.

Some Progress Perceived In Fixing Website Problems, But Government Still Gets Poor Ratings For Implementation

Attention to news about the ACA rollout continues to be high in December, with about six in ten saying they followed these news stories very (21 percent) or fairly closely (38 percent). The share saying they closely followed news about the ACA rollout is somewhat lower than the share paying as much attention to reports about the U.S. economy (67 percent), and about equivalent to the share that reports following news about the death of Nelson Mandela (62 percent). Just over half the public continues to say that news coverage of the law is mainly about politics and controversies, while 7 percent say it’s mostly about how the law will impact people and a third say it’s a balance of the two. The plurality (40 percent) say news coverage is mostly unbiased, but twice as many say coverage is biased against (34 percent) as biased in favor of the law (17 percent). 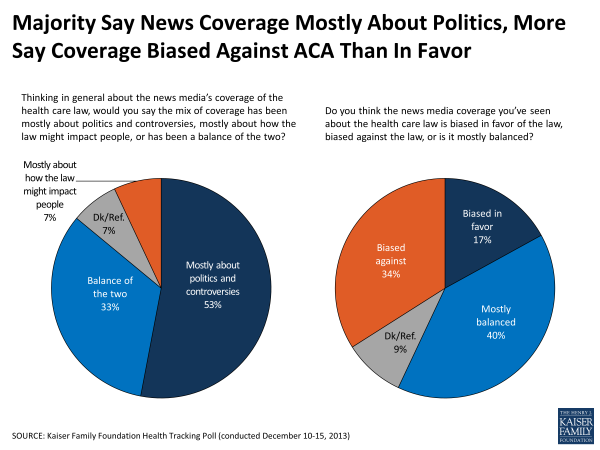 One of the main ACA stories in the news this month has been the ongoing government efforts to fix the website problems with the online health insurance marketplace, Healthcare.Gov. Half the public believes the federal government has made “a lot” (11 percent) or “some” progress (39 percent) in fixing these problems, while four in ten say there has been “not much” progress (26 percent) or “no progress at all” (15 percent). 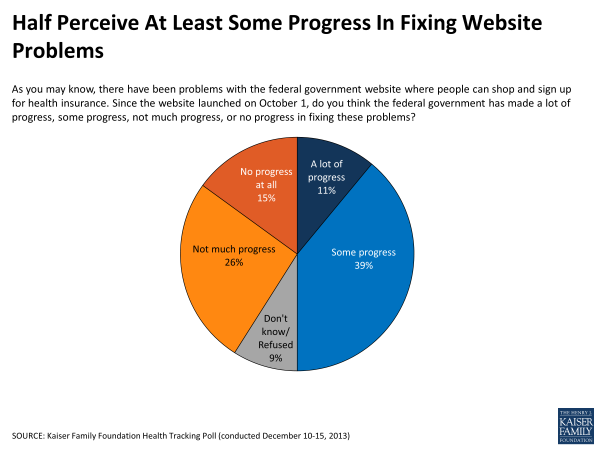 Despite perceiving at least some progress on this front, the public continues to give the federal government very low ratings for implementing the law – eight in ten say they’re doing an “only fair” (31 percent) or “poor” job (50 percent), while just 15 percent rate it as “excellent” or “good,” similar to October’s ratings.

A Spotlight On The Uninsured

With new coverage for some individuals set to begin in a few weeks, more than half (54 percent) of the non-elderly uninsured continue to say they don’t have enough information about the ACA to know how the law will impact them, and seven in ten (69 percent) say they’ve heard only a little or nothing about the new health insurance marketplace. This month, 15 percent of the uninsured say they’ve been personally contacted by someone about the law through a phone call, email, text message, or door-to-door visit.

The survey also highlights the difficulties those without health insurance continue to experience in accessing and paying for medical care. Roughly half (49 percent) of the uninsured say their family has had problems paying medical bills in the last year, about twice as many as adults under age 65 with health insurance (26 percent). And 44 percent of the uninsured say they’ve had trouble getting medical care, four times the rate reported by those with insurance (11 percent). The uninsured also report other financial struggles at higher rates, including taking on a second job or extra hours at work and having difficulty paying housing costs. 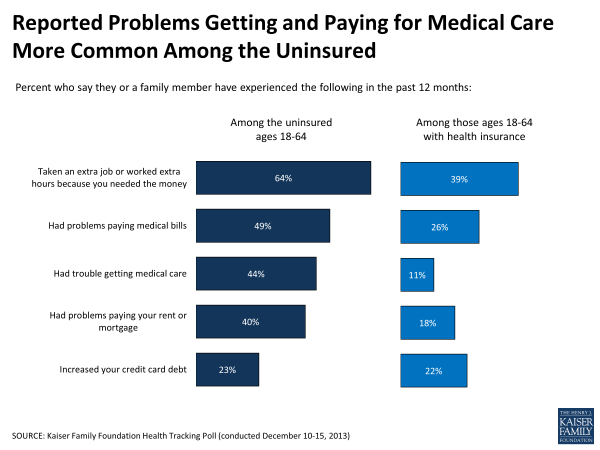