Section 2: A Special Focus on the Concerns, Experiences and Attitudes of the Black Community

From the inception of the epidemic, HIV/AIDS has placed a disproportionate burden on black Americans, a community already struggling with a raft of other health disparities. Though blacks make up 12 percent of the U.S. population, they currently account for 45 percent of new HIV infections, 48 percent of new AIDS diagnosis, and 57 percent of deaths due to HIV.1 In this section, we focus in on the concerns, experiences and attitudes of black Americans toward HIV/AIDS as the epidemic marks its thirtieth year.

The Threat Of HIV/AIDS Is More Immediate, More Personal and More Widespread in the Black Community 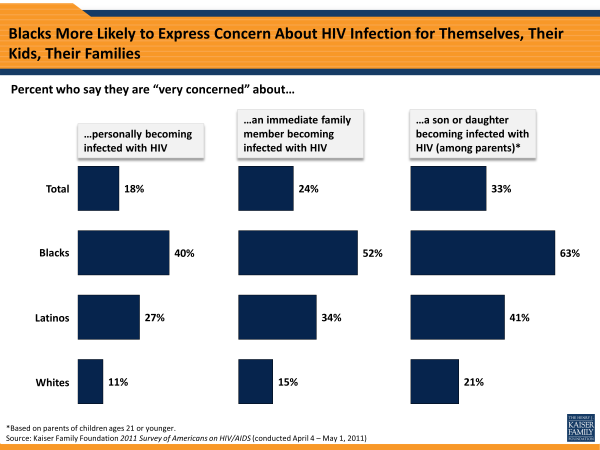 Widespread worries about infection are likely a reflection of the black community’s direct experiences with the disease: a majority of black adults (57 percent) report knowing someone who is either HIV-positive, has AIDS or has died from AIDS. Four in ten say this person is a close friend or family member, twice as many as among whites (17 percent). And perhaps as a result of these heightened concerns, blacks are much more likely than whites to talk to their partners about HIV/AIDS: 67 percent say they have, compared to 42 percent of whites. 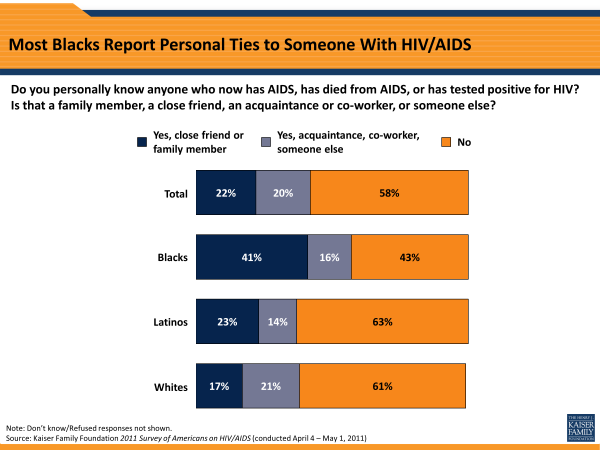 While most black Americans are aware that there is currently no cure for AIDS and no vaccine that can prevent HIV infection, roughly three in ten continue to be unaware of these stark realities. Overall, 35 percent either think there is a vaccine that can prevent HIV infection or aren’t sure whether this is true, and 32 percent either think former basketball star and AIDS activist Magic Johnson has been cured of AIDS or don’t know enough to say either way.

Two-thirds know that an HIV-positive woman can take medications while pregnant to reduce the risk of her child being born with the virus—with black women substantially more knowledgeable on the topic than black men (72 percent correct compared to 59 percent)—but a third of blacks overall either do not know or do not believe this is a viable option.

Overall, blacks are somewhat less likely than whites to know there is no vaccine or cure for HIV, and somewhat more likely to know about the medicines available to limit mother-to-child transmission of HIV. In terms of knowledge about how one might contract HIV, 75 percent of blacks are aware that you cannot get HIV from sharing a drinking glass, 82 percent know you cannot get it from a toilet seat and 84 percent understand it cannot be transmitted by swimming in a pool with someone who has the virus. Still, overall a third of blacks (34 percent), as is true for whites, hold at least one of these misperceptions.

Blacks See More Discrimination, Express Some Discomfort In Interacting With Those With HIV, Hold More Negative Views of Homosexuality

Blacks are much more likely than whites or Latinos to perceive discrimination against those with HIV/AIDS. Fifty-five percent say there is “a lot” of prejudice against those living with the disease, compared to 37 percent of whites and 41 percent of Latinos.

A significant proportion of blacks, however, continue to express discomfort with close interactions with those who have HIV, perhaps due to some of the misunderstandings mentioned above. A large majority of blacks—eight in ten—would have little problem working with someone who was HIV-positive, a figure that has risen significantly since the late 1990’s. Still, about four in ten say they would be uncomfortable having a roommate with HIV, and most (57 percent) would feel uncomfortable with an HIV-positive individual preparing their food.

While Blacks Most Likely to Perceive AIDS As Pressing Problem For Their Community, Some Sense Of Lessening Urgency

Blacks are nearly three times as likely as whites to report that AIDS is an increasingly urgent problem in their community (35 percent compared to 12 percent). However, despite the number of new infections remaining stable in recent years and at higher levels than previously thought, Kaiser surveys have found the level of urgency dropping slowly among blacks from 49 percent in 2006 to 40 percent in 2009 and 35 percent now. 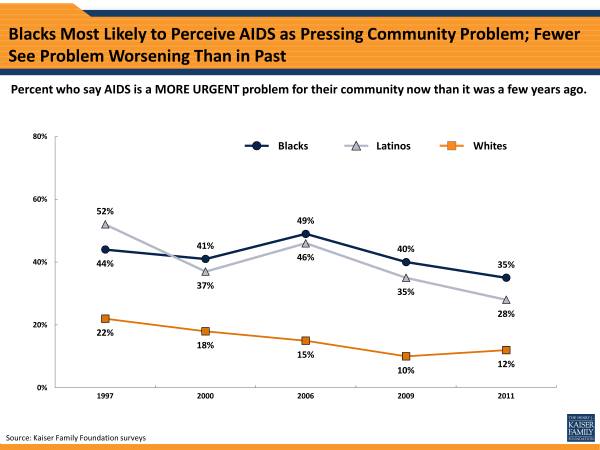 Still, HIV/AIDS ranks second on the list of the nation’s most urgent health problems among blacks, named by 19 percent compared to 39 percent who mentioned cancer. In comparison, among Americans as a whole, AIDS ranks seventh as an urgent health problem. As is true among whites and Latinos, the proportion of blacks naming HIV/AIDS as the top issue has lessened over time as treatment advances have led to longer life spans and improved quality of life for those living with the disease.

Following a trend that emerged in our 2009 survey, as is true for Americans overall, the proportion of blacks who say they have “seen, heard or read” about the U.S. AIDS epidemic continues to fall. Currently, 54 percent report having heard at least something about HIV in the past year, down from 65 percent in 2009 and 83 percent in 2004.

The primary source of information about HIV/AIDS in the black community is the media, as is true for whites and Latinos. Overall, 53 percent of blacks say that most of the information they have about AIDS comes from the media, somewhat lower than the 66 percent of whites who say so. The second most common source are doctors or nurses (15 percent, twice as many as among whites), followed by friends and family (12 percent).

Interestingly, while only 4 percent of blacks say that the church is their primary source of AIDS information, a full 55 percent of churchgoing blacks say they have heard about HIV/AIDS from the pulpit, much higher than the 36 percent of religiously active whites who report hearing about AIDS from their clergy. Still, most blacks—67 percent—say that religious leaders and institutions are not doing enough to help solve the problem of HIV/AIDS, a charge that a majority of blacks also level against a number of other local and national institutions, from Congress (78 percent not doing enough) to public schools (60 percent) to pharmaceutical companies (64 percent). 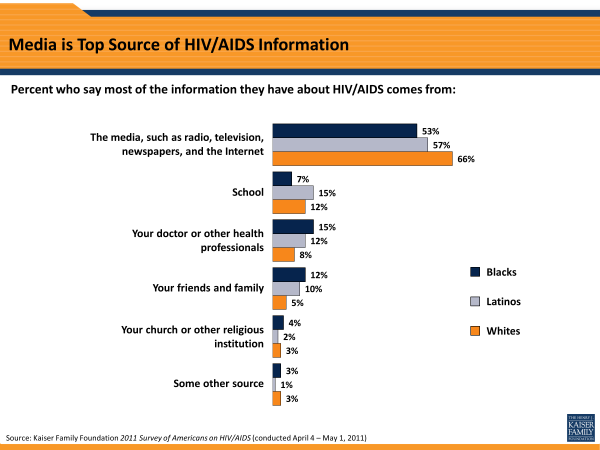 Asked about six possible HIV-related topics on which they might get more information, a majority of blacks express interest in hearing more about each one. This is a stark contrast to whites, where no more than four in ten express interest in additional information on any one topic. Overall, seven in ten blacks say they want more information about how to stop HIV from spreading and just as many want more information on how to talk to children about HIV. Six in ten want to know more about who should get an HIV test and where they might go to get one. Latinos express just as much interest as blacks on all these topics. 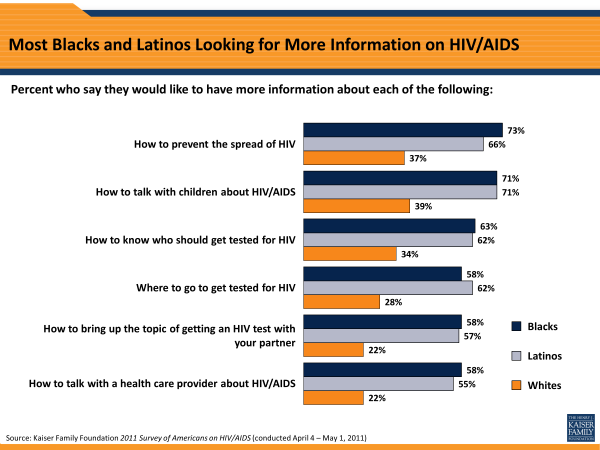 While the impact of HIV/AIDS in the U.S. Latino community2 has not been quite as disproportionate as it has among blacks, Latinos continue to be heavily affected by the epidemic, experiencing higher rates of new infections, AIDS diagnoses, and people living with HIV than their white counterparts.3 Latinos’ reported opinions and experiences often reflect this disproportionate impact, some of which are included throughout this report, and a few of which are summarized below.

Latinos appear to feel the disproportionate impact of HIV on their community, with six in ten (61 percent) saying HIV/AIDS is a serious problem for people they know, similar to blacks and roughly twice as many as among whites (32 percent). Still, Latinos (37 percent) are just about as likely as whites (39 percent) to say they know someone who currently has HIV or has died from AIDS, a share that is far lower than among blacks (57 percent).

Latinos express a level of concern about contracting HIV that is somewhat higher than whites (27 percent vs. 11 percent say they are “very concerned”), but lower than that expressed by blacks (40 percent). Like black Americans, Latinos are substantially more likely than whites to say they want more information about various HIV-related topics, including how to prevent the spread of HIV, how to know whether to get tested and where to go to do so, and how to talk with their partners, doctors, and children about the disease.

Like their black counterparts, reported visibility of HIV/AIDS in the U.S. has declined for Latinos in recent years. In 2004, 74 percent of Latinos reported seeing, hearing, or reading at least something about the U.S. epidemic in the previous year, a figure that declined to 54 percent in 2009 and 43 percent today.

Latinos are somewhat more likely than whites and blacks to express attitudes that may stigmatize people living with HIV. For example, Latinos are 9 percentage points less likely than their white peers to say they would be comfortable working with someone with HIV (71 percent vs. 80 percent) or having an HIV-positive roommate (53 percent vs. 62 percent). Just over half (54 percent) of Latino parents say they’d be comfortable if their children had an HIV-positive teacher, compared with seven in ten white parents (71 percent). And four in ten Latinos (41 percent) agree that “in general, it’s people’s own fault if they get AIDS,” a share that is higher than among blacks or whites (31 percent and 26 percent respectively).

Section 1: The Dynamics of American Opinion on HIV/AIDS Section 3: Young Adults and the Domestic Epidemic