The February Kaiser Health Tracking Poll focuses on some of the health policy implications of this winter’s national debate over gun violence, gun control and the adequacy of the nation’s response to the needs of those living with serious mental illness. The survey finds that one in five Americans have some connection to a victim of gun violence, a share that doubles to 42 percent among blacks. Worry about becoming a victim is even more widespread among the public (four in ten are at least somewhat worried) and again is strikingly high among members of minority groups (62 percent of blacks express concern, as do 75 percent of Hispanics). When it comes to mental health issues, most Americans perceive that those with serious mental illness experience at least some discrimination or prejudice in U.S. society, even as many say they themselves would be uncomfortable living or working near someone with severe mental health issues. The majority of the public backs the idea having equal benefits for mental health coverage; fewer than half (38 percent) recognize mental health parity is already law. With one in four adults estimated1 to suffer from a mental health problem, the poll finds that just shy of one in ten Americans report having had trouble getting access to the mental health services they need. Finally, the February survey checked in on opinion toward the Affordable Care Act (ACA), which tilted negative in this poll: 42 percent unfavorable, 36 percent favorable, and 23 percent with no opinion, the latter a new high in Kaiser polling. As the national debate on immigration reform picks up speed, the survey finds four in ten Americans wrongly believe that the ACA offers benefits to undocumented immigrants, and another quarter are not sure how undocumented immigrants are treated under the law. The majority of the public says that if lawmakers did pass a law allowing some undocumented immigrants to apply for provisional legal status, those who obtain this status should have full access health coverage options provided by the ACA. However, it is worth noting that, today, many lawfully present immigrants face restrictions that limit their eligibility for health coverage.

ACA Update: Public Opinion Back to a Negative Title in Early 2013

The February Kaiser Health Tracking Poll finds the public leaning negative on the Affordable Care Act (ACA), with 42 percent holding unfavorable views and 36 percent favorable, a seven percentage point drop in favorability driven primarily by a post-election fade in support among Democrats. With the presidential election in the rearview mirror and the ACA largely out of the national political spotlight, the share of Democrats backing the law dropped from 72 percent in November to 57 percent, closer to October levels. Democrats’ support for the law, like the public’s overall, wobbles up and down within a relatively narrow band month by month, and it’s difficult to say whether this downward drop will last. Support seems to have shifted to the no opinion category, up to nearly a quarter (23 percent), a new high in Kaiser polling. 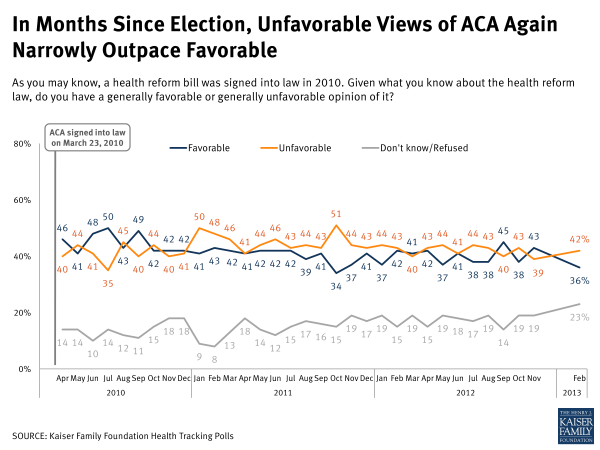 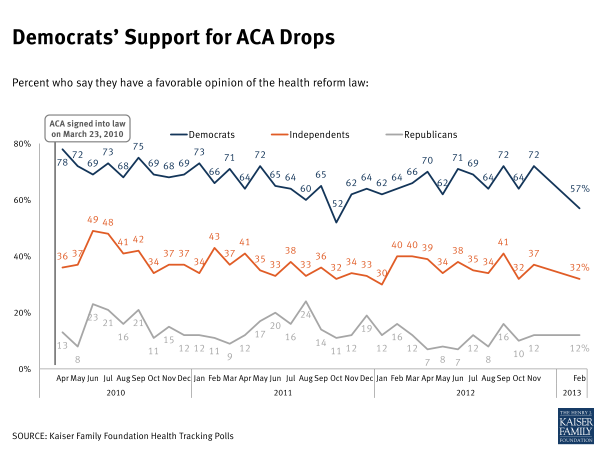 Over the nearly three years of its existence as law, there have been a number of hard-to-dispel misimpressions about the ACA, and as Congress’ attention turns to immigration reform, the February tracking poll returned to one of these regarding undocumented immigrants. The survey finds that four in ten Americans – including more than half of Republicans – wrongly believe undocumented immigrants will have access to benefits under the health law and another quarter say they aren’t sure whether this is fact or fiction.

The onset of the immigration debate has also spurred policy discussions over whether undocumented immigrants that could potentially obtain some new form of provisional legal status through immigration reform legislation would be eligible for health coverage options under the ACA. Current immigration reform proposals suggest that individuals granted this provisional lawful status may not be eligible for federal benefits, including health coverage. At first blush, at least, the majority of Americans hold a different opinion: six in ten say that undocumented immigrants who obtain provisional legal status should be able to enroll in Medicaid if their income is low enough to qualify (63 percent) or receive subsidies to purchase insurance in the exchanges if they don’t get affordable insurance through their employer (59 percent). However, it is worth noting that, under current law, many lawfully present immigrants are subject to eligibility restrictions for health coverage, including Medicaid and the Children’s Health Insurance Program (CHIP), that remain in place under the ACA.2

Support for extending access to health coverage options does differ by party, with majorities of Democrats and independents saying they are in favor of providing this group with coverage options available to citizens under the ACA, while Republicans tilt negative on the proposal. Majorities in each major racial and ethnic group support the extension of benefits, with a larger degree of support among Hispanics and blacks.

One In Five Americans Know A Victim Of Gun Violence; Worry Reaches Even More Broadly

Spurred by the tragic mass shootings in Newtown, CT and Aurora, CO in 2012, gun control has also emerged as a political hot topic this year. While a number of polls have measured the public’s attitudes towards the policy options being put on the table, this month’s Health Tracking Poll measures the public’s personal experiences with, and worries about, gun violence. 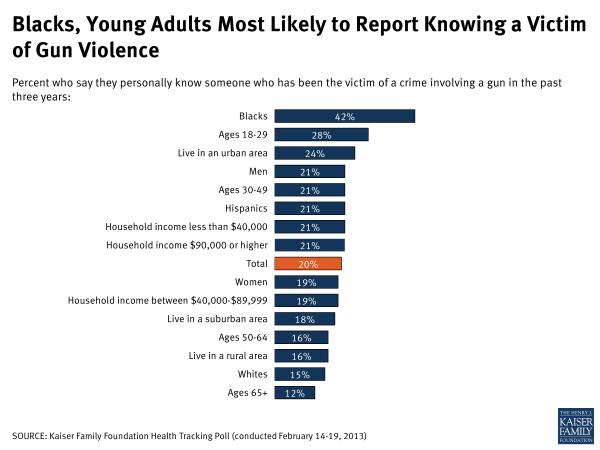 One in five Americans say they personally know someone who was a victim of gun violence in the last three years, and for most of these individuals the connection is close. Among those who know a victim, a majority (62 percent) say these were good friends or family members, and some were even a victim themselves.Blacks stand out as the group most likely to know someone who was affected (42 percent do), followed by younger Americans (28 percent of those aged 18 to 29).

Worry about gun violence reaches even more broadly, encompassing many who have not personally been touched by a gun-related crime. Overall, four in ten Americans (42 percent) say they are at least somewhat worried about being the victim of gun violence. Again, members of minority groups are particularly likely to report concern. Also disproportionately likely to be harboring worries are individuals with lower incomes, those who know a victim of gun violence, and those whose households do not have a gun. Least likely to be worrying about gun violence: individuals who live in a gun-owning household. 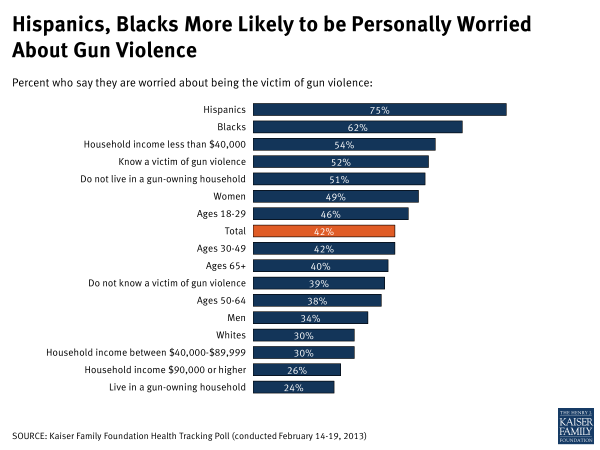 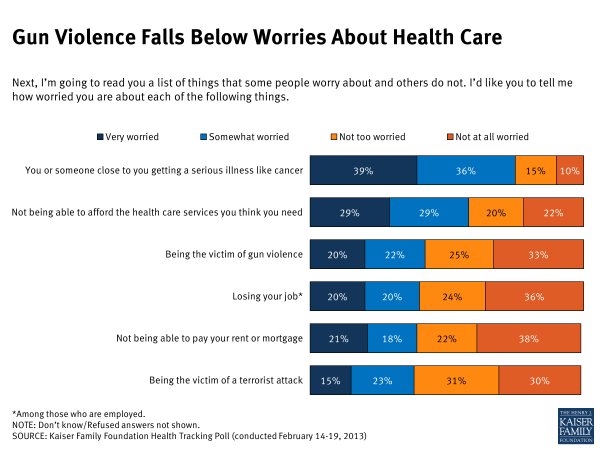 To keep this concern in context, it’s worth noting that other health-related worries do outstrip those about being a victim of gun violence. Considerably more, for example, are worried about someone close to them getting seriously ill (75 percent) or affording necessary health care (58 percent). But this ranking is driven by gun violence being a significantly lower concern among whites. Among both blacks and Hispanics, concern about gun violence ranks a clear and close second, behind only concerns about becoming seriously ill, and evenly tied with concerns about affordability of health care. 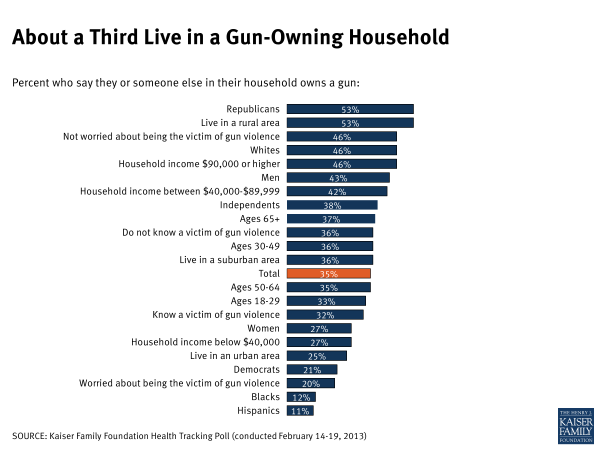 Despite experience with, and worries about, gun violence, guns remain a widespread aspect of American life, for some a way to feel safer in a society where such violence is a daily event. Overall, about a third of adults say they live in a gun-owning household [see pull-out section above], and as noted above, this group is less likely than non-gun owners to worry about being a victim of a gun-related crime. When those living in non-gun households are asked whether they would feel safer if they owned a gun, the majority say a gun wouldn’t make much difference to their feelings of safety, either inside or outside the home. But more than one in five in this group say that a gun would make them feel safer, while one in six say it would make them feel less safe. Most non-gun owners whose lives have been touched by gun violence report that the experience did not cause them to consider buying a gun.

The mass shooting at Sandy Hook Elementary School perpetrated by a disturbed 20-year old man has also increased the national dialogue surrounding the role of the mental health care system in averting similar tragedies. In light of this, we took a closer look at Americans’ experience accessing mental health care, their views on mental health parity, and the extent to which they perceive discrimination against those with serious mental illnesses.

Overall, most Americans (75 percent) say they favor “requiring insurance companies to offer benefits for mental health and substance abuse services that are equivalent to benefits for other medical services.” And this idea is widely popular, with majority support across age, race, insurance status, and even political party. At the same time, fewer than four in ten Americans (38 percent) are aware that there is a federal requirement (as part of the Mental Health Parity and Addiction Equity Act of 20083 that certain health plans providing mental health benefits have the same rules regarding copays, deductibles and coverage limits for those benefits as for other medical services. Just as many Americans (40 percent) currently believe insurance plans can have separate rules for mental health benefits, and another 22 percent aren’t sure of what the status is. 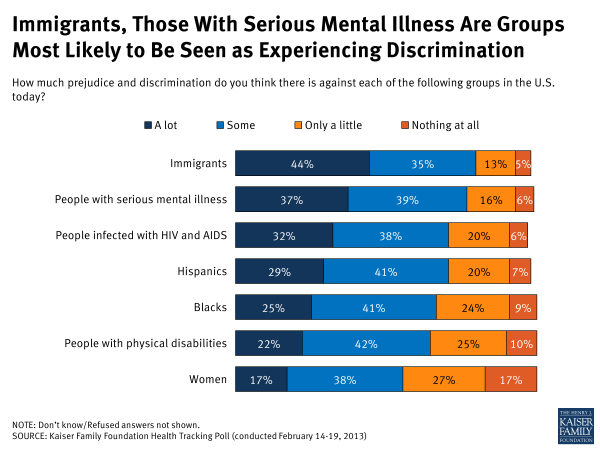 Those who live in households with direct experience with the mental health care system are somewhat more likely to perceive discrimination against people with serious mental illness than others: 45 percent see a lot of prejudice, versus 35 percent of those who have not dealt with mental health issues in their household. 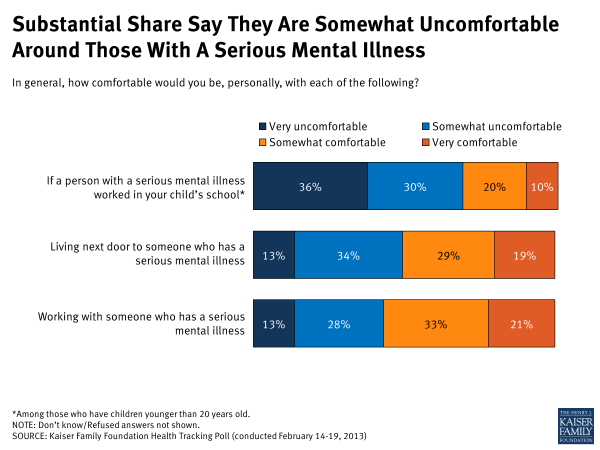