Community health centers are an integral component of the health care safety-net in the U.S., providing access to care for over 21 million mostly low-income patients in medically underserved areas across the country. The Affordable Care Act (ACA) made a major investment in the health center program to help ensure access to care as coverage expands, establishing a five-year, $11 billion trust fund to support health center growth and new construction over five years, and providing $1.5 billion to expand the National Health Service Corps (NHSC), from which health centers recruit many of their clinical staff.

This brief is the latest in an annual series of updates on community health centers produced by the Kaiser Commission on Medicaid and the Uninsured in partnership with the George Washington University’s Geiger Gibson Program in Community Health Policy. It provides a current overview of community health centers, the patients they serve, the services they furnish, and the sources of their revenues. Finally, this report considers the prospects for sustaining and building on the gains in primary care access that have been achieved for medically underserved communities as a result of the Medicaid expansion and the Health Center Fund established under the ACA.

An Overview of Health Centers

The community health centers program was established in 1965 by the Office of Economic Opportunity as a small demonstration program. Under Section 330 of the Public Health Service Act, which authorized the health centers program and is now a permanent authority under the ACA, health centers must satisfy five key requirements to receive federal grant funding. They must be located in or serve medically underserved communities and populations. Their doors must be open all patients, regardless of their ability to pay. They must furnish comprehensive primary health care, defined in both federal statute and regulations. They must prospectively adjust their charges in accordance with patients’ ability to pay (i.e., sliding scale fees). And they must be governed by community boards, at least 51% of whose members are health center patients.

Over the nearly five decades since the program was established, both the number of health centers and health center patient volume have grown substantially. In 2013, 1,202 federally funded health centers located in all 50 states, the District of Columbia (DC), and six U.S. Territories, and distributed about evenly between urban and rural areas, served 21.7 million patients in 9,170 different service delivery sites (Figure 1). In addition, 100 “look-alike” health centers, which meet all federal requirements but are supported with state and local funds rather than federal grants, served 1 million patients. 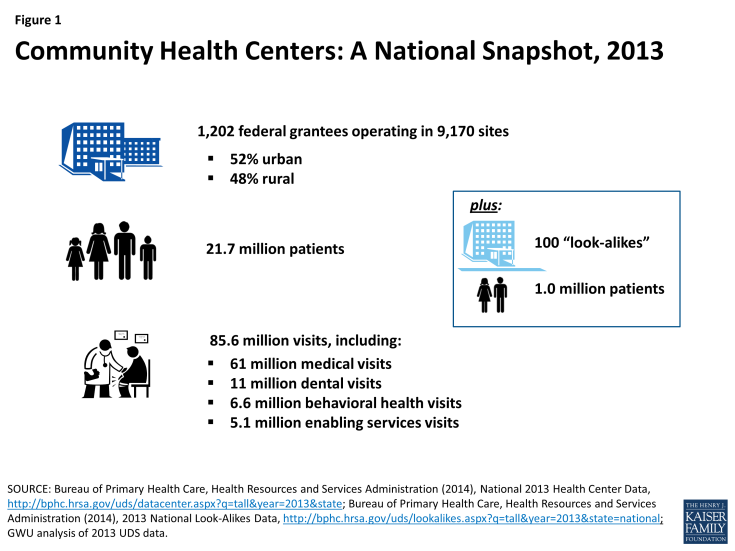 Two main factors have fueled health center growth. The first is the investment of federal grant funding to build and support health centers. The second is increased revenues from the Medicaid program due to both expansions of Medicaid coverage for low-income pregnant women, children, and parents over time, and Medicaid’s prospective, cost-based “Federally Qualified Health Center” (FQHC) payment methodology, which  also applies to payments made by Medicare, CHIP, and qualified health plans (QHPs) operating in the new health insurance Marketplaces. The FQHC rate enhances health centers’ capacity by covering much of the cost of care furnished to insured patients, which means that health centers do not have to use their grant funds to subsidize those patients, and can instead use their grants, as intended, to finance care for their uninsured patients and to expand both the scope of services they provide and the number of community locations in which they operate. Indeed, while health centers are serving increasing numbers of patients with Medicaid coverage, they are also serving more uninsured patients – 7.6 million in 2013, up from 4.9 million in 2003.1 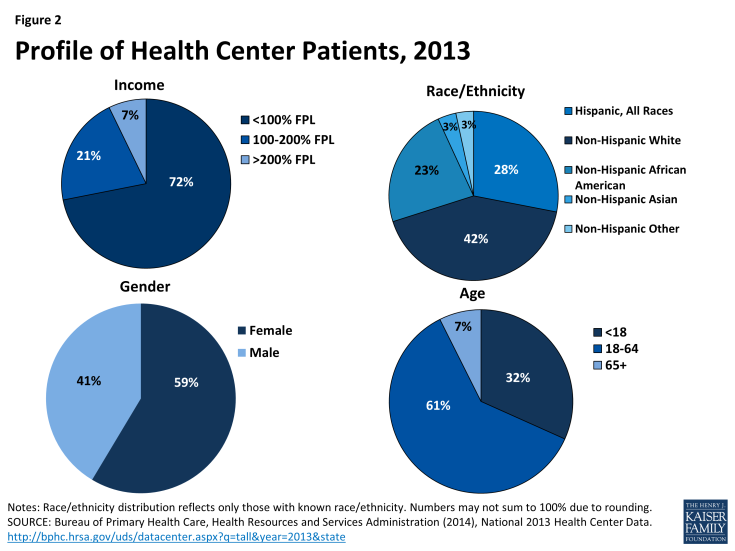 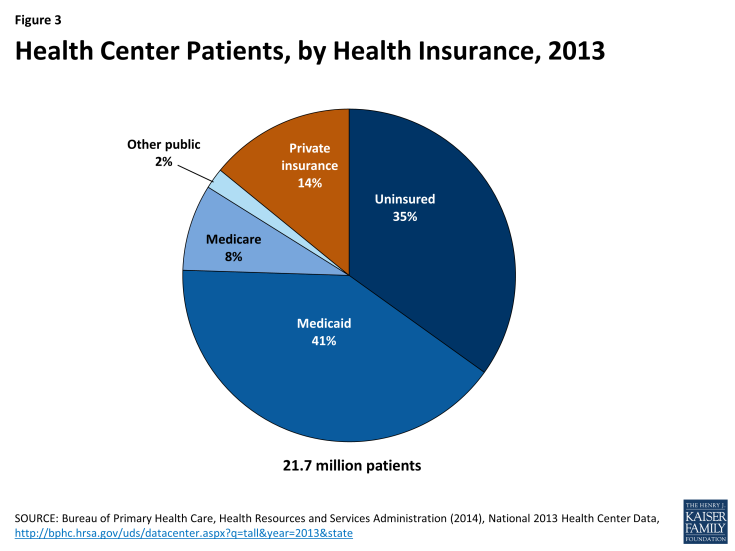 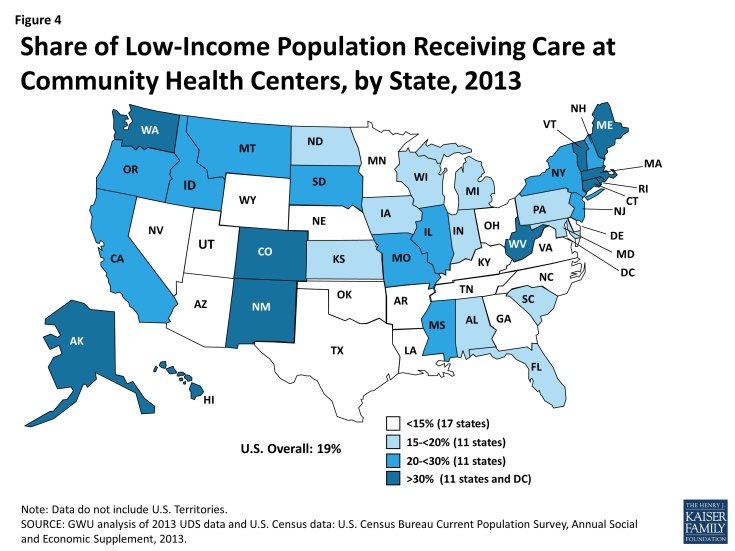 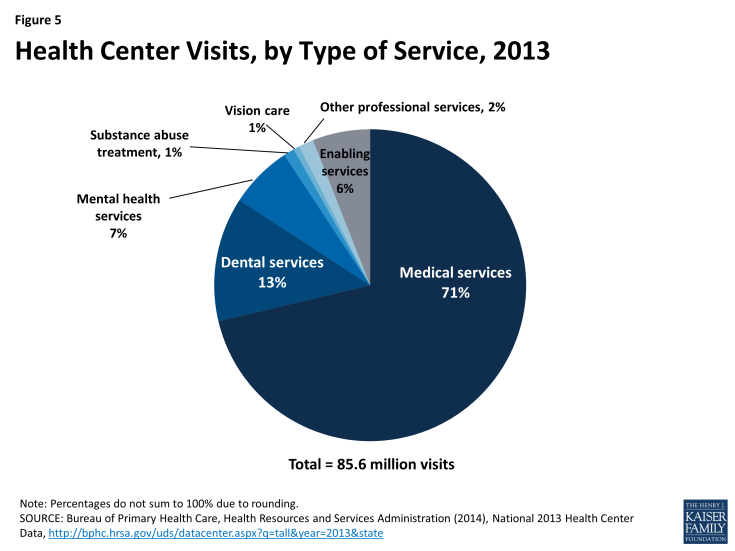 In addition, the scope of services available at many health centers expanded over this 13-year time period (as measured by the share of health centers reporting specified types of clinical staff). In particular, more than three-quarters of health centers offered dental services in 2013, compared to less than two-thirds in 2000 (Figure 6). The share offering mental health services grew even more dramatically, from 42% of health centers in 2000 to 76% in 2013. The fraction of health centers providing substance abuse treatment remained flat at about one-fifth over the period. Still, because of major growth in the number and patient capacity of health centers during this time, many more people using health centers now have access to these services. 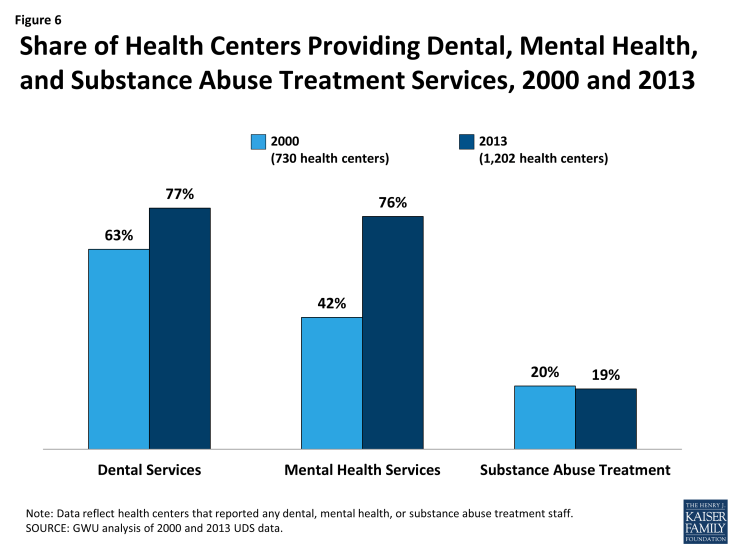 Health centers are major employers in their communities, bringing economic benefits as well as health care to the urban and rural areas they serve. In 2013, nearly 157,000 full-time equivalent (FTE) staff, including over 10,700 physicians and more than 5,100 nurse practitioners, worked in health centers; health centers employed an average of 130 FTEs.3

Health center revenues in 2013 totaled $15.9 billion. The single largest source of revenue was Medicaid, which accounted for 40%. Health center grants from the Bureau of Primary Health Care (BPHC), made up the second-largest share, accounting for 18%, and other federal grants provided 3%, while state, local, and private grants and contracts provided 14%. Private insurance, Medicare, and amounts paid directly by patients provided 8%, 6%, and 6% of health center revenues, respectively (Figure 7). 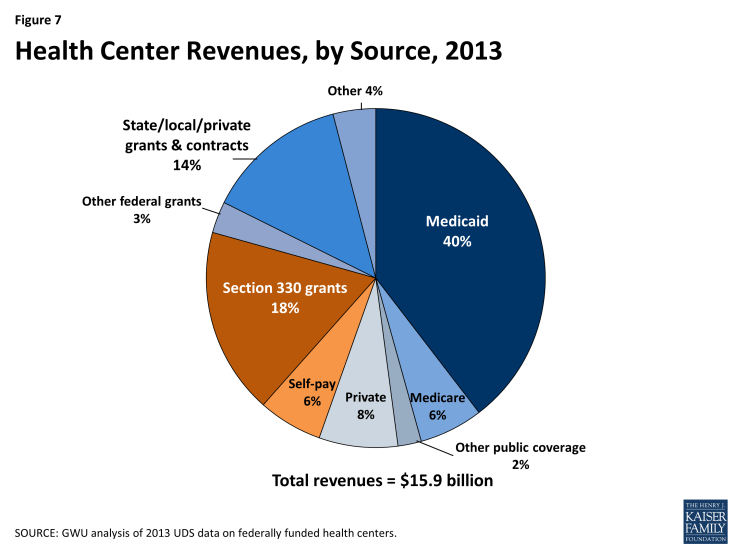 Two studies point to improvements in selected outcomes associated with access to health center services in combination with health insurance coverage. One study, looking at the first 10 years in which the Medicare program was in effect, examined the impact of the earliest health centers, also established in that period, on mortality rates. The study findings suggest that health centers were associated with reductions in older adult mortality rates, and that increased use of primary care and access to lower-cost medication provided by health centers were likely important mechanisms.10 The other study, using more recent data, examined the association between health center use (a proxy for primary care access) by low-income Medicare beneficiaries and Medicare spending and clinical quality. The researchers found that, in regions where a relatively higher proportion of low-income residents were served by health centers, Medicare spending per beneficiary was significantly lower with no apparent compromise of clinical quality of care.11 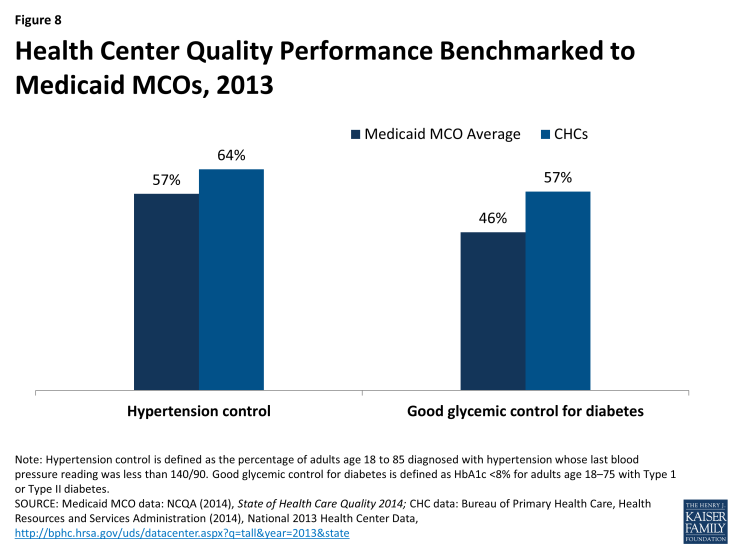 At the same time, health centers struggle to furnish adequate health care, especially for uninsured patients, for whom referrals to specialty care outside the health center are extremely difficult to arrange. Securing referrals for Medicaid patients can be difficult as well, but as health centers increasingly develop formal affiliations with integrated health care delivery systems that provide a full range of primary and specialty care, these problems may diminish. Virtually all health centers are included in Medicaid managed care plan networks, and many are part of provider networks offered by qualified health plans (QHPs) sold in the Marketplaces.

Health Centers and State Decisions about the ACA Medicaid Expansion

Under the ACA, federal grant funds continue to flow to health centers through the regular annual Congressional appropriations process. In addition, federal allocations from the ACA Health Center Trust Fund will continue through 2015. These two sources of federal grant funding have enabled health centers to grow in recent years to more fully meet the health care needs of their communities, including the uninsured. Increased awareness of health coverage options due to ACA-related outreach efforts, and modernized and streamlined Medicaid eligibility and enrollment systems required of all states under the ACA, have also contributed to higher participation in Medicaid among uninsured people who were previously eligible but not enrolled, potentially generating increased patient revenues for health centers. 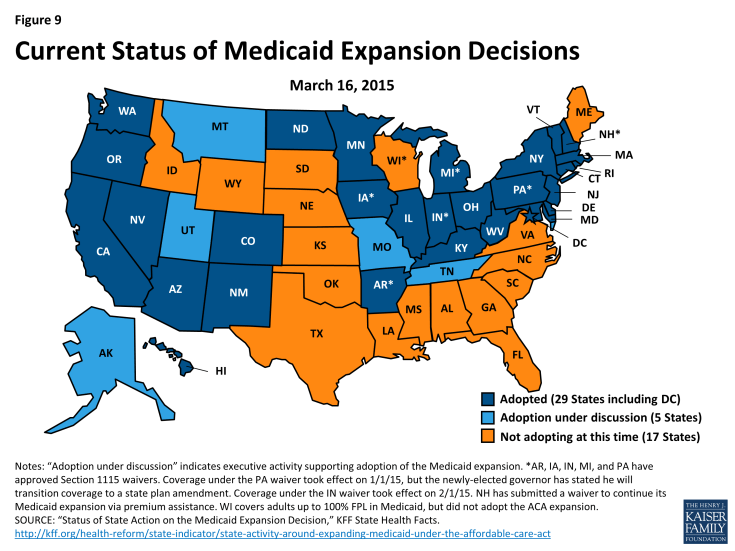 In the 22 states that have so far not adopted the Medicaid expansion, close to 4 million nonelderly adults with income below 100% FPL fall into a coverage gap.14 This is so because they cannot qualify for tax subsidies to purchase QHPs sold in the Marketplace, which begin at 100%FPL. In 2013, 2.5 million uninsured adults in the 22 non-expansion states received health center services. Assuming that uninsured adult health center patients are equally as likely (72%) as uninsured adults overall to have income below 100% FPL, most of these health center patients could qualify for Medicaid if their state adopted the expansion. About half the 22 states that have not expanded Medicaid are southern states that have among the highest poverty rates in the nation as well as high uninsured rates. These states’ decisions not to expand Medicaid have a disproportionate effect on African-Americans, who reside in high numbers in the southern states and are more likely to be low-income and uninsured than the general population.15 African-Americans account for approximately one in four health center patients in the non-expansion states.16

Data reported by the Centers for Medicare and Medicaid Services (CMS)17 indicate that Medicaid enrollment in the Medicaid expansion states grew by 27% between the summer of  2013 leading up to the first ACA open enrollment period, and December 2014. Even in the non-expansion states, Medicaid enrollment grew by 7%, meaning that  health centers in these states, too, can be expected to receive additional Medicaid patient revenues that may help support expanded clinical care capacity, although on a far more modest scale.

The ACA investments in health centers and the NHSC are supporting substantial expansion of preventive and primary care capacity in underserved communities as coverage and the demand for care increase, and helping to ensure and improve access for those who remain uninsured. However, both the Health Center Trust Fund and the increase in NHSC funding are set to expire in 2015. Thus, health centers face increased financial challenges going forward.

In addition to the costs of providing caring for those who remain uninsured, health centers may also face uncompensated care costs for patients who are insured, due to under-insurance and QHP provider network limitations:

The ACA makes significant investments in health coverage and care for communities that are disadvantaged from an economic and health perspective. The law’s principal investment, of course, was the creation of pathways to affordable health coverage for low- and middle-income people, through Medicaid and tax subsidies. However, the Supreme Court’s decision on the Medicaid expansion has resulted in a coverage gap in the non-expansion states for millions of the poorest people in the nation, who are among those most likely to rely on community health centers for primary care. Should the Supreme Court decide in King v. Burwell that subsidies for Marketplace coverage are available only through state-based Marketplaces, health centers in the Medicaid non-expansion states, all but one of which defaulted to the federal Marketplace, will be exposed not only to the impact of the coverage gap on their poorest patients, but also to the impact of reduced access to private coverage for their patients with income at or above the federal poverty level. The other major ACA investment from the standpoint of health centers, the $11 billion dedicated trust fund, sunsets at the end of 2015. Whether the fund will be continued has become an increasingly important question, as the number of patients health centers serve is projected to fall by one-third – 7 million people – if it is not extended.25

As ACA implementation continues, health centers serve as a bellwether of the impact of health reform on the nation’s most vulnerable communities. Several important questions offer a framework for ongoing analysis and evaluation:

Measures of health centers’ scope and activity, and of rates of coverage and access among their patients, are important gauges of how the ACA’s goals are translating into improvements for the populations and communities most at risk of disparities in health and health care. Moving forward, analyses that investigate the implications of state Medicaid expansion decisions for health centers and their patients can illuminate the relationship among Medicaid expansion, health center capacity, and access to care in underserved communities.

Funding support for this paper was provided to The George Washington University by the RCHN Community Health Foundation.