For Medicare patients, hospitalizations can be stressful; even more so when they result in subsequent readmissions to the hospital. While many readmissions cannot and should not be prevented, researchers have found wide variation in hospitals’ readmission rates, suggesting that patients admitted to certain hospitals are more likely to experience readmissions compared to other hospitals.1 A number of studies show that hospitals can engage in several activities to lower their rate of readmissions, such as clarifying patient discharge instructions, coordinating with post-acute care providers and patients’ primary care physicians, and reducing medical complications during patients’ initial hospital stays.2

Medicare—through Congressional direction and Administration initiatives—has started implementing incentives to reduce hospital readmissions. One example, and the focus of this Issue Brief, is the Hospital Readmission Reduction Program (HRRP) which penalizes hospitals with relatively higher rates of Medicare readmissions.3 Applying to most inpatient hospitals, the Department of Health and Human Services states that the HRRP will play a role in its new goals to tie an increasing share of traditional Medicare payments to quality or value in the coming years.4

This Issue Brief describes the HRRP, analyzes the impact of this program on Medicare patients and hospitals, and discusses several issues that have been raised regarding its implementation. While other studies have focused primarily on penalties imposed on specific hospitals, this Issue Brief provides additional analysis on the extent to which Medicare beneficiaries stay in hospitals with relatively high penalties and national trends in beneficiary readmission rates.5

Medicare uses an “all-cause” definition of readmission, meaning that hospital stays within 30 days of a discharge from an initial hospitalization are considered readmissions, regardless of the reason for the readmission. This all-cause definition is used in calculating both the national average readmission rate and each hospital’s specific readmission rate. Starting in 2014, CMS began making an exception for planned hospitalizations (such as a scheduled coronary angioplasty) within the 30-day window; these are no longer counted as readmissions.

The current focus in the HRRP is on readmissions occurring after initial hospitalizations for selected conditions—namely, heart attack, heart failure, pneumonia, chronic obstructive pulmonary disease (COPD), and elective hip or knee replacement. CMS also collects hospitals’ overall readmission rates (regardless of initial diagnoses), but these overall rates are not currently used in the HRRP to calculate readmissions penalties.

The first three years of the HRRP

The HRRP was established by a provision in the Affordable Care Act (ACA) requiring Medicare to reduce payments to hospitals that have relatively high readmission rates for patients in traditional Medicare. It started in 2013 as a permanent component of Medicare’s inpatient hospital payment system (i.e., not a temporary demonstration project), and applies to most acute care hospitals. Hospitals exempt from the HRRP include psychiatric, rehabilitation, long term care, children’s, cancer, critical access hospitals, and all hospitals in Maryland.6

CMS first started imposing readmission penalties in fiscal year 2013, during which the maximum penalty was 1 percent of the hospital’s base inpatient claims, increasing to 2 percent for 2014, and will remain at 3 percent starting for fiscal year 2015 and beyond (Table 1). When calculating each hospital’s readmission rate, CMS uses three full years of previous data to determine hospital performance. For penalties that will be imposed in fiscal year 2015, therefore, CMS based its calculations on hospital readmissions that occurred from July 2010 through June 2013.

For penalties levied in 2013 and 2014, CMS focused on readmissions occurring after initial hospitalizations for three selected conditions: heart attack, heart failure, and pneumonia. For penalties levied in 2015, CMS included additional diagnoses: chronic obstructive pulmonary disease (COPD), and elective hip or knee replacement. In future years, CMS has indicated that it plans to continue with all these diagnoses and, for 2017, will also assess performance following initial diagnosis of coronary artery bypass graft (CABG) surgery to the list.

More hospitals are penalized in 2015, compared to previous years, but average penalties remain below 1 percent

In the third year of the HRRP (FY 2015), the proportion of hospitals receiving a penalty increased to 78 percent—up from 64 percent and 66 percent in 2013 and 2014 respectively. This increase is not surprising given that for 2015 penalties, CMS included additional diagnoses when assessing each hospital’s performance. Average penalties (among hospitals receiving a penalty) will also increase compared to previous years; however, they will remain below 1 percent, despite the maximum cap on the penalty increasing to 3 percent as part of the planned phase-in of the HRRP.

CMS estimated total hospital penalties under the HRRP to sum to $428 million in 2015, an increase over prior years ($290 million in 2013 and $227 million in 2014).8 This increase is due mostly to more hospitals receiving a penalty, given the expanded number of initial diagnoses included in calculating readmission rates, but a small part of the increase may also due to the increase in the maximum penalty. 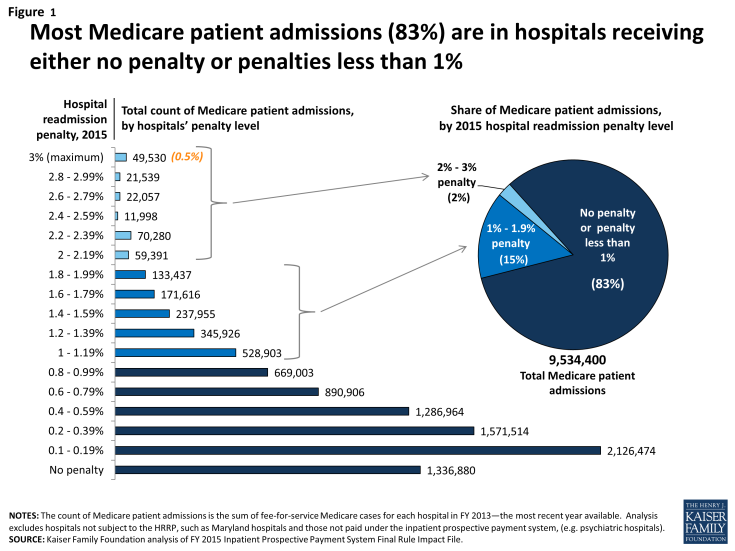 Figure 1: Most Medicare patient admissions (83%) are in hospitals receiving either no penalty or penalties less than 1%

CMS has been posting individual hospital readmission rates on its Hospital Compare website, in addition to other measures of quality and patient satisfaction, since 2009. Designed for use by Medicare consumers as well as researchers, this website also provides comparisons of each hospital’s Medicare readmission performance to the national average by indicating whether the hospital is “better/worse/no different” than the U.S. National rate.11  In addition to readmissions following hospitalizations for selected diagnoses, the Hospital Compare website started reporting each hospital’s overall Medicare readmission rates.

Analysis of this database shows that 2012 marks the first measurable declines in readmissions (Figure 2). Specifically, when the last six months of 2008 were replaced by the first six months of 2012, national readmission rates fell across all three diagnosis categories. Furthermore, these rates continued to decline in the subsequent measurement period. For each of the three diagnosis categories, therefore, hospital readmissions fell about 1-2 percentage points by mid-2013. These drops started after Congress enacted the HRRP, suggesting that hospitals may have initiated strategies to lower their readmission rates during the HRRP measurement periods preceding the start of the program’s penalties. Additionally, other clinician activities outside the hospitals may have contributed to the decline in readmissions. CMS has estimated reductions in overall hospital readmissions (not specific to any initial diagnoses) totaling 150,000 fewer Medicare patient readmissions during the period between January 2012 and December 2013.12 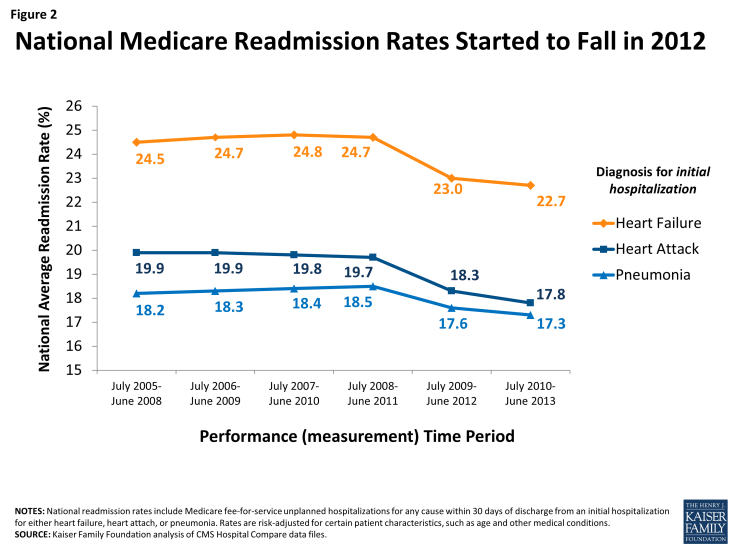 Concerns raised by researchers and hospital representatives have prompted policymakers to consider refinements to the implementation of the HRRP and look for ways to engage other health care providers and patients.13 Some of the refinements under discussion include changes in the way hospital measures are risk-adjusted, setting hospital performance targets, and engaging other providers.

Our analysis finds that most Medicare patient admissions (83%) for 2015 will be in hospitals receiving either no readmission penalty or penalties of less than 1 percent. Given the stress and problems that patients experience when readmitted to the hospital, it may be reassuring that beneficiaries’ stays are typically in hospitals with relatively lower readmission rates. While hospitals at the upper end of the penalty range account for a considerably smaller proportion of beneficiary inpatient stays, to the extent that higher readmission rates signal concerns about care quality and discharge planning, patients going to higher-penalty hospitals may be at greater risk for related problems. Further study about other possible differences between relatively high- and low-penalty hospitals may be helpful, such as in their discharge planning activities or their overall patient complexity, particularly in teaching hospitals and hospitals with higher proportions of low-income Medicare patients. Additionally, further research could examine the role of other clinicians in these hospitals’ communities, including ambulatory and post-acute care providers and other organizations.

Our research also shows that previously flat readmission rates for traditional Medicare started to decline in 2012 for patients who had been hospitalized for heart failure, heart attack, or pneumonia. This timing suggests that hospitals may have started to implement strategies to lower their readmissions in response to the enactment of the HRRP, with the understanding that the financial penalties (starting in 2013) would be based on performance in prior years. Further, because the declines are seen for multiple conditions, multipronged and system-based efforts to reduce readmissions are likely, rather than just improvements in certain clinical treatment for specific diseases.17 Also, concurrently, other providers in the community may have started to focus on ways to lower readmissions among their patients, thus contributing to the national decline in rates.

The overall effect of the HRRP on Medicare beneficiaries is rather indirect. To the extent that the financial penalties encourage hospitals to implement activities designed to improve care quality and lower their rate of preventable readmissions, the penalty program could be beneficial to Medicare patients and the Medicare program. Alternatively, some have noted that reducing financial resources to lower-performing hospitals could have a negative impact on their delivery of patient care. Regarding beneficiaries’ out-of-pocket expenses, a hospital’s penalty status has no direct effect on beneficiaries’ cost sharing during inpatient stays. For readmissions in particular, the inpatient hospital deductible is waived ($1,260 in 2015), but beneficiaries do face other out-of-pocket liabilities—mostly in the form of coinsurance for separately billed physician services received during their stay—as they would in all inpatient stays.18

In the coming years

With the enactment of the HRRP in the ACA, the aim to reduce preventable hospital readmissions has gained traction among providers and policymakers. In fact, the HRRP is featured as part of the Administration’s newly announced goal to tie an increasing share of traditional Medicare payments to quality or value in the coming years. Moreover, key programs, such as Accountable Care Organizations (ACOs), bundled-payment initiatives, and the Independence at Home demonstration, include provider incentives to lower hospital admission and readmission rates, either directly or indirectly. The Community-based Care Transitions Program, also enacted by the ACA, is designed to assess ways that community-based organizations (such as local aging services agencies) might partner with hospitals to improve patients’ transitions to other settings, such as skilled nursing facilities or the patients’ home.19 Additionally, CMS has recently started allowing physicians to bill Medicare for “transitional care management” after a beneficiary’s discharge from a hospital or other health care facility.

Evaluations of these ongoing Medicare programs and demonstrations will be helpful in determining which interventions are more successful than others in reducing the rate of preventable hospital readmissions. The continuing decline in preventable readmission rates would help slow the growth in Medicare spending and may also signal improved care for patients during and after their hospitalizations.