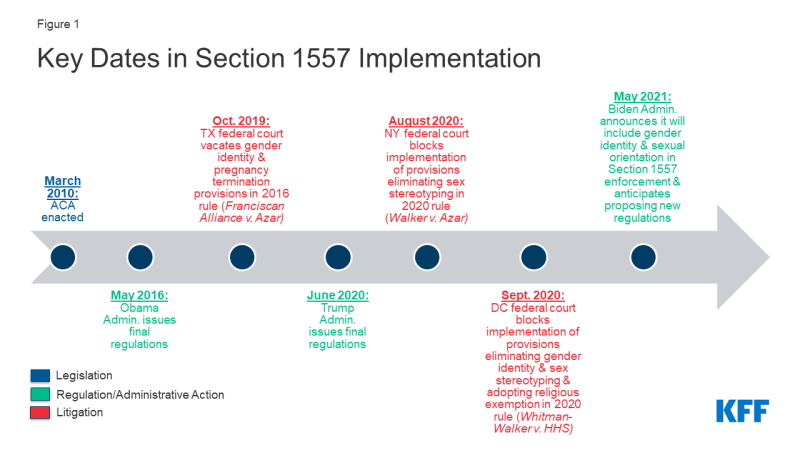 HHS recently indicated that it will issue a new notice of proposed rule-making (NPRM) to revise the Section 1557 regulations. The Biden Administration states that its “anticipated rulemaking proceeding will provide for the reconsideration of many or all of the changes to existing Section 1557 regulations” that are being challenged in current litigation (described below). The timeframe for the new NPRM is uncertain, with HHS stating that it intends to do so “as expeditiously as reasonably possible” while “account[ing] for HHS’s limited resources. . . .” In light of the Biden Administration’s May 10 announcement, it is likely that the new NPRM will propose not only restoring gender identity but also adding sexual orientation to the regulatory definition of sex discrimination, thereby expanding on the Obama Administration interpretation. The extent to which the new NPRM proposes restoring or expanding other Section 1557 provisions that were changed by the Trump Administration unrelated to the definition of sex discrimination, such as those related to discrimination in health insurance benefit design; language access; notices, grievance procedures, and enforcement; and covered entities, remains to be seen. The new NPRM also could propose restoring provisions prohibiting discrimination based on gender identity and sexual orientation that were eliminated by the Trump Administration in other federal health care regulations outside of Section 1557 that apply to Medicaid, the ACA Marketplaces, and private insurance issuers.

Two other cases challenging the Trump Administration regulations are currently active (Table 1). Decisions in these cases could influence the contents of the Biden Administration’s expected NPRM as well as the status of the Trump regulations that remain in effect. The active cases include:

Another two cases, which were filed to challenge the Obama Administration regulations and are still pending, raise issues about the interaction between Section 1557’s nondiscrimination provisions and federal laws that protect religious beliefs. The Supreme Court did not reach this issue in Bostock, noting that this is a question for future cases to decide. These cases include:

The interpretation and enforcement of Section 1557’s prohibition against discrimination in federally funded health programs and activities will continue to develop in the coming months. Outside of the Section 1557 regulations and surrounding litigation, federal courts in other cases have granted relief to individuals alleging discrimination under Section 1557, relying on the text of the statute itself. For example, a Wisconsin federal court permanently blocked the state Medicaid program’s categorical exclusion of gender affirming services from coverage as a violation of the statutory prohibition against sex discrimination. Future court rulings, the forthcoming NPRM, and administrative enforcement by OCR under the new Biden Administration policy together will influence Section 1557 law and policy and could affect the ability to access health coverage and care without discrimination.