Suburban Voters in the 3 States (Arizona, Florida and North Carolina) are Divided in Who They Trust on Health Care Overall, but Florida Suburban Voters Give Biden the Edge on the ACA and Pre-Existing Condition Protections

The death of Supreme Court Justice Ruth Bader Ginsburg is drawing renewed attention to a pending Supreme Court challenge to the Affordable Care Act (ACA), supported by the Trump administration, that threatens to overturn the entire law, including its protections for people with pre-existing conditions.

To assess how the renewed attention to the case, which will be argued a week after Election Day, could motivate voters ahead of the presidential election, KFF and The Cook Political Report analyzed recent polling from three competitive Sun Belt states (Arizona, Florida, and North Carolina).

Fielded prior to Justice Ginsburg’s death, the polls find that Democratic nominee Joe Biden has a considerable advantage among voters on which presidential candidate they think has the better approach to determining the future of the Affordable Care Act, as well as maintaining protections for people with pre-existing health conditions.

More than half of voters in Arizona, Florida, and North Carolina say Biden has the better approach on the ACA (55% in each state) compared to four in ten voters who say President Trump (41% in AZ and NC, 40% in FL). 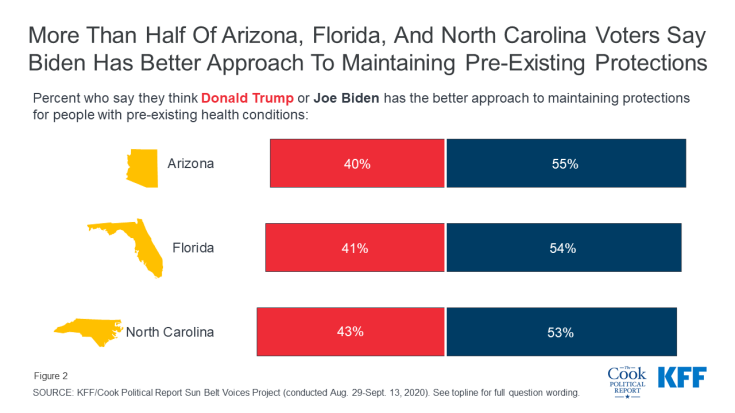 Swing voters, the crucial group of voters who are either entirely undecided or not firm in their vote choice, and for some there is a chance they may vote for the other candidate, give Biden the advantage on all key health care issues, including the ACA and maintaining pre-existing conditions. 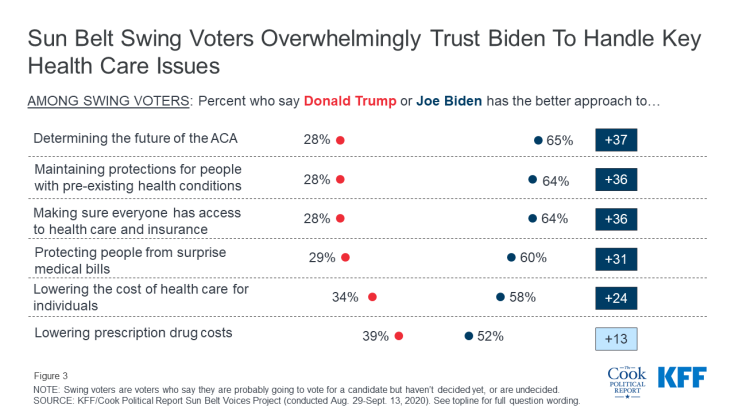 The analysis also examines the views of suburban voters in the three states on health care, and finds overall they are divided in who they trust the most on health care, with similar shares saying Biden (50%) and Trump (48%).

North Carolina suburban voters are more divided on which candidate has the better approach to handle some health care issues, including the future of the ACA and maintaining protections for people with pre-existing conditions, and give President Trump a clear advantage on lowering overall health care costs (55% v. 42%) and prescription drug costs (55% v. 43%). 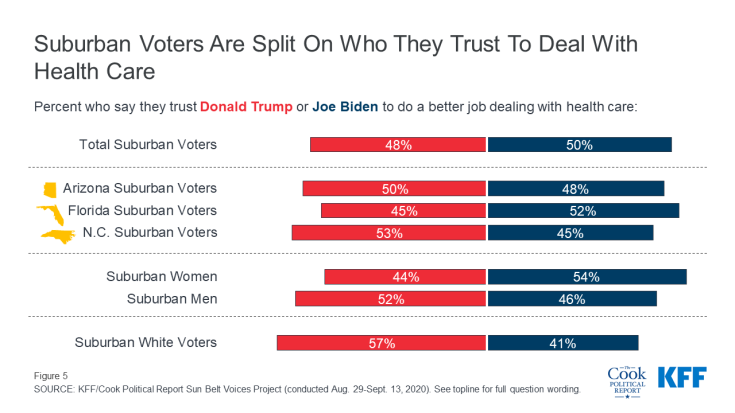 
Designed and analyzed by public opinion researchers at KFF in collaboration with The Cook Political Report, the poll was conducted between Aug. 29 and Sept. 13, among a representative random sample of 3,479 registered voters in three Sun Belt states (1,298 in Arizona, 1,009 in Florida, and 1,172 in North Carolina). The poll relies on an innovative probability-based methodology designed to address shortcomings with telephone-only surveys based on either voter-registration rolls or random-digit dialing. Voters were contacted via mailing address using registration-based sampling and encouraged to participate in the survey either online or by telephone, and follow-up contacts were made using outbound telephone calls. The margin of sampling error is plus or minus 4 percentage points in Florida and 3 percentage points in Arizona and North Carolina. For results based on subgroups, the margin of sampling error may be higher.