Poll: Most Americans See Antibiotic Resistance as a Public Health Problem, But Nearly Half Have Not Taken Antibiotics As Prescribed

While most Americans believe that antibiotic resistance poses a public health problem, new KFF polling finds nearly half (45%) say they personally have not taken antibiotics as prescribed – one factor contributing to the rise of “superbugs” that are resistant to existing treatment.

Those misusing antibiotics includes people who say they took antibiotics without talking to a doctor or other provider (16%) and, more commonly, those who say that they did not finish a course of antibiotics (39%).

The new polling examines the public’s experiences and knowledge about antibiotic resistance, which occurs when bacteria and other germs change so that the antibiotic medicines designed to kill them no longer work. 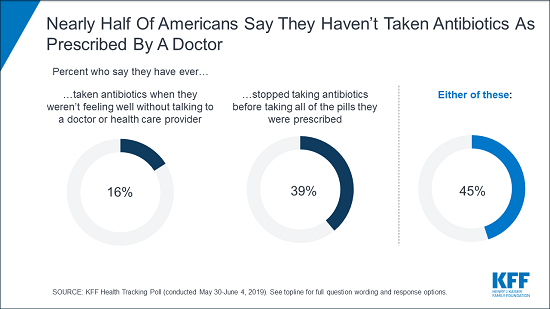 Most Americans say that they have heard the various terms used to talk about the issue of the overuse of antibiotics including antibiotic resistance and superbugs, and they know what these terms mean.

Designed and analyzed by public opinion researchers at KFF, the poll was conducted May 30-June 4, 2019 among a nationally representative random digit dial telephone sample of 1,206 adults. Interviews were conducted in English and Spanish by landline (298) and cell phone (908). The margin of sampling error is plus or minus 3 percentage points for the full sample. For results based on subgroups, the margin of sampling error may be higher.