Poll: Most Americans Say Puerto Ricans Are Not Yet Getting the Help They Need After Hurricane Maria

Poll Reveals a Deep Partisan Divide in Perceptions, with Republicans Much More Likely Than Democrats and Independents to View the Federal Government’s Response Favorably

As President Trump threatens to scale back the federal response to help Puerto Rico recover from Hurricane Maria, most Americans say that Puerto Ricans affected by Hurricane Maria are not yet getting the help they need (62%), and about half say that the federal government has been too slow to respond (52%) and is not doing enough to restore basic services (52%), a new Kaiser Family Foundation survey finds.

The survey gauging the public’s knowledge and views about Puerto Rico’s recovery efforts following the devastating category 4 hurricane that struck Sept. 20 reveals a sharp partisan divide in perception: Republicans are much more likely than Democrats or independents to view the federal response as appropriate. 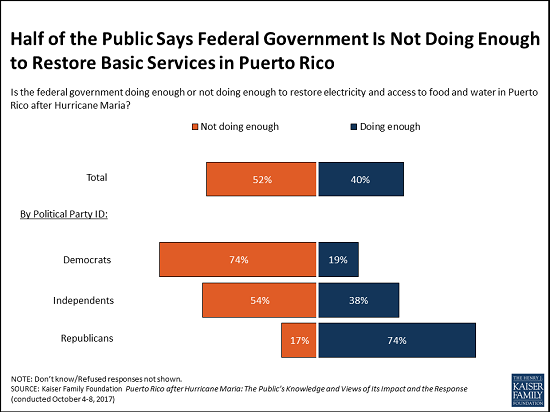 Fielded after President Trump’s Oct. 3 visit to Puerto Rico, the survey finds the public has been paying close attention to the hurricane’s damage to Puerto Rico, with almost three quarters of the public (73%) saying that they have heard “a lot” about it.  An even larger share (88%) report knowing that the damage to the island was “very severe.” Most Americans (76%) also correctly report that most of Puerto Rico’s residents are U.S. citizens.

Designed and analyzed by public opinion researchers at the Kaiser Family Foundation, the poll was conducted from October 4 – 8, 2017 among a nationally representative random digit dial telephone sample of 1,008 adults. Interviews were conducted in English and Spanish by landline (306) and cell phone (702). The margin of sampling error is plus or minus 4 percentage points for the full sample. For results based on subgroups, the margin of sampling error may be higher.