About 4 in 10 Affected Residents Say They are Still Not Getting Needed Help; Housing, Financial Assistance and Help Navigating Aid Systems Top List of Unmet Needs

Nearly a year after Hurricane Harvey swamped the Texas Gulf Coast, a growing share of affected residents say their lives are back on track, but three in 10 (30%) say their lives remain disrupted, finds a new Kaiser Family Foundation/Episcopal Health Foundation survey of residents in 24 hard-hit Texas counties.

Overall the new survey finds 70 percent of affected residents say their lives are largely or almost back to normal, up from 56 percent three months after the storm. Affected residents include those who reported property damage or income loss due to Hurricane Harvey – about six in 10 (58%) of all residents across the 24-county area.

Some, especially those who suffered severe damage to their homes, continue to struggle. The survey finds 8 percent of all residents remain displaced from their pre-Harvey homes. This includes 20 percent of Beaumont/Orange/Port Arthur area residents.

The new KFF/EHF survey is the second to probe the experiences and views of residents in this region, which includes Houston and Harris County; the counties surrounding Harris; the Golden Triangle area east of Houston that includes Beaumont, Orange and Port Arthur; and the coastal counties southwest of Houston that include Corpus Christi and Rockport. The survey also finds income, geographic, and racial/ethnic differences in residents’ recovery and challenges following Harvey.

“This survey shows how much Harvey continues to haunt many across coastal Texas, with significant shares reporting ongoing challenges with their housing, finances and health,” said Drew Altman, president and CEO of the Kaiser Family Foundation. “Residents’ top priorities include both preparing for future storms and providing financial assistance and help rebuilding homes for those who need it.”

“One year later, many of those with the fewest resources are still struggling to bounce back from Harvey’s punch,” said Elena Marks, president and CEO of the Episcopal Health Foundation. “This kind of information is crucial to letting government and other recovery groups know what Texans still need for a long-term comeback.”

One worrying sign: About four in 10 affected residents (42%) say they are not getting the help they need to recover, essentially unchanged since three months after the storm. Groups most likely to say they aren’t getting the help they need include affected residents who are Black (60%), living in the Golden Triangle (50%), or have self-reported incomes below 200% of the federal poverty level (50%).

The biggest areas of need are applying for financial assistance (28% of affected residents say they need more help), navigating the different systems for receiving aid (27%) and repairing home damage (24%), the survey finds.

Affected residents also say they need more help finding affordable housing (14%), finding a job (11%), and getting health care (16%) and mental health care (9%). These shares are little changed since three months after the first survey, suggesting that help has been slow to come to those most in need. 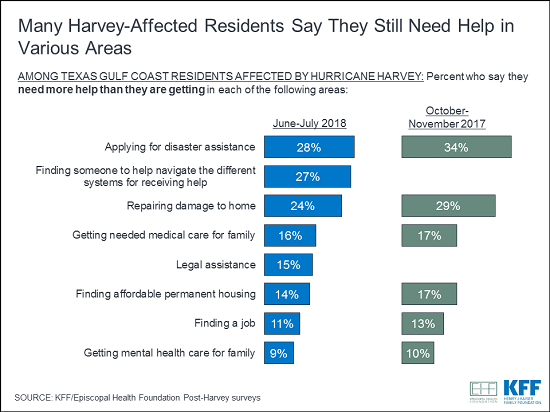 When both affected and unaffected residents across the Texas Gulf Coast were asked about their priorities for rebuilding and recovery in their area, the greatest focus is on preparing for future storms and providing financial and housing help to those in need.

Two-thirds (68%) of residents say more resources are needed for flood prevention and control strategies; nearly as many (64%) say so for community preparedness for future disasters. Ranking just below these priorities are getting financial help to people who need it (63%) and rebuilding destroyed homes (62%).

About half say more resources are needed in getting mental health services to those who need them (52%, up from 42% in previous survey), helping small businesses (51%), and repairing roads and highways (49%, up from 40% in the first survey). Four in 10 say more resources are needed for repairing damaged schools (44%) and rebuilding community spaces like recreation centers and parks (42%).

With the 2018 hurricane season already underway, most residents say that they believe government officials at all levels are at least somewhat prepared to deal with future hurricanes. This includes Texas state officials (75%); local city, town, and county officials (75%) and the federal government (64%).

About three-quarters (77%) also say that they themselves are ready to deal with future hurricanes, though about half (52%) say they have not personally taken any specific steps to prepare.

About three in ten (31%) affected residents report some storm-related negative effects on their mental health, including having a harder time controlling temper (19%), feeling their mental health has gotten worse (18%), taking a new prescription for a mental health issue (10%), or increasing their alcohol use because of Harvey (6%). These shares are similar to those reported three months after Harvey, suggesting there has not been either much improvement or further decline since then.

Despite the relative prevalence of these issues, few (8%) affected residents say that they or someone in their household has received any mental health services since the storm. A similarly small share (11%) say there was a time since the hurricane when they thought they or a family member might need mental health services but did not receive them. These shares are somewhat higher among those who say their lives are still disrupted from the storm.

Some Say Health Effects from the Storm Persist

Overall, one in six (16%) affected residents say they or someone in their household has a health condition that is new or has gotten worse since Harvey. That’s similar to the share reporting health problems three months after the storm, suggesting that many health effects from the storm have lingered. The most commonly reported new or worsening health conditions include respiratory problems such as asthma, coughing or other breathing problems (32% of those reporting a health condition), and high blood pressure (10%).

Designed and analyzed by researchers at the Kaiser Family Foundation and the Episcopal Health Foundation, the Harvey Anniversary Survey was conducted by landline and cellular telephone June 21 – July 29, 2018 among a random representative sample of 1,651 adults ages 18 and older living in 24 Texas counties that suffered large amounts of property damage from Hurricane Harvey according to FEMA reports. The margin of sampling error including the design effect is plus or minus 3 percentage points for the full sample and plus or minus 4 percentage points for the sample of affected residents. For results based on other subgroups, the margin of sampling error may be higher.