Kaiser/Economist Survey Highlights Americans’ Views and Experiences with End-of-Life Care, With Comparisons to Residents of Italy, Japan and Brazil

Half of Americans — including nearly six in ten of those in fair or poor health – say people in the U.S. have too little control over their end-of-life medical decisions, finds a new Kaiser Family Foundation/Economist survey examining views and experiences with end-of-life care in the U.S. and three other nations.

While most residents of Italy, Japan and Brazil say that the government bears primary responsibility for caring for people’s health and long-term care needs as they age, Americans are more evenly divided with almost equal shares saying government (42%) and individuals and families (44%) should be most responsible.

Most Americans (62%) say the U.S. government is “not too prepared” or “not at all prepared” to deal with the aging population, while a third (35%) say it is “very” or “somewhat” prepared. Americans are more split on whether the health care system and families in the U.S. are prepared to deal with the aging population, with about half saying each is prepared and the other half saying they are not.

About a quarter (27%) of Americans, including half (51%) of adults age 65 and over, say they have written down their wishes for end-of-life care; these shares are much higher than the shares reporting taking such steps in the other three countries. Among those who haven’t, the most common reason for not doing so is that they haven’t gotten around to it.

When asked to think about their own death, most Americans (54%) say it is “extremely important” to make sure their family is not burdened financially by their care.  Large shares also cite other factors as “extremely important,” including having loved ones around them (48%), being at peace spiritually (46%) and being comfortable and without pain (42%).

Fewer (23%) say living as long as possible is “extremely important,” though the share who do is higher among Blacks (45%) and Hispanics (28%) than among Whites (18%). Blacks and Hispanics are also more likely than whites to say the health care system in the U.S. places too little emphasis on preventing death and extending life as long as possible. 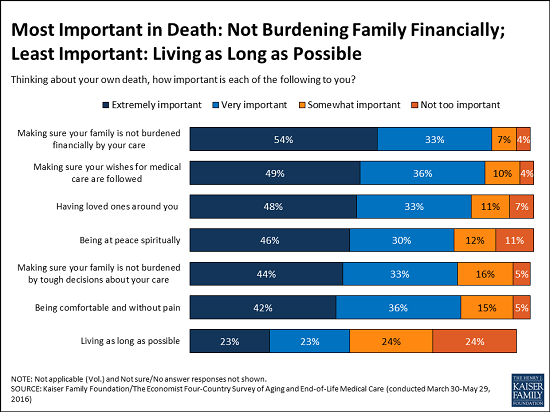 The four-country survey is part of a polling partnership between Kaiser and The Economist. Findings are featured in two Foundation reports, one on Americans’ views and experiences, and one that captures the results across all four countries.  The poll was designed and analyzed by survey researchers at Kaiser in collaboration with a team from The Economist. Each organization is solely responsible for the content it publishes based on the survey.

The poll was conducted by telephone from March through November 2016 among random digit dial telephone (landline and cell phone) samples of adults in the U.S. (1,006), Italy (1,000), Japan (1,000) and Brazil (1,233). The margin of sampling error for results from each country is plus or minus 4 percentage points. For results based on subgroups, the margin of sampling error may be higher.