As the Ebola outbreak in the DRC continues, new KFF explainer examines the status of the response and the limited U.S. role to date

The ongoing Ebola outbreak in the Democratic Republic of Congo (DRC), recently declared a “public health emergency of international concern” by the WHO Director-General, is now second only to the West Africa outbreak of 2014-2015 in terms of number of cases and deaths. A new KFF explainer reviews the history of the outbreak in the DRC, which U.S. agencies are involved, how U.S. personnel are assisting, global response activities, and the role of vaccination in controlling the outbreak. 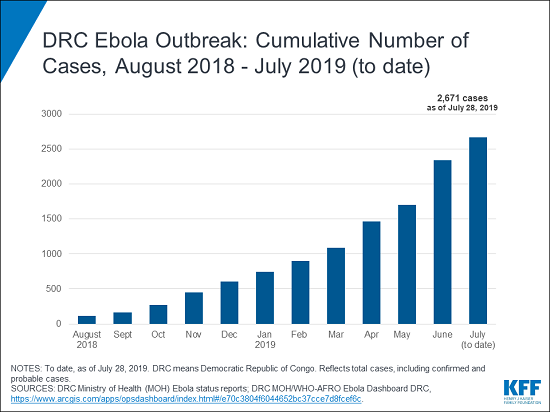 U.S. engagement has been limited compared to the 2014-2015 West Africa outbreak, where the U.S played a leading role and mobilized an unprecedented amount of funding and personnel. The U.S. has chosen a more limited role in this outbreak due to security concerns as well as improvements in global capacity to respond to Ebola. So far, the U.S. has contributed $136 million for the response.

The explainer also discusses how the U.S. government might change its approach and engagement in the DRC going forward, such as by providing additional funding or allowing U.S. government personnel to work directly in the outbreak zone.