This was published as a Wall Street Journal Think Tank column on October 15, 2014. 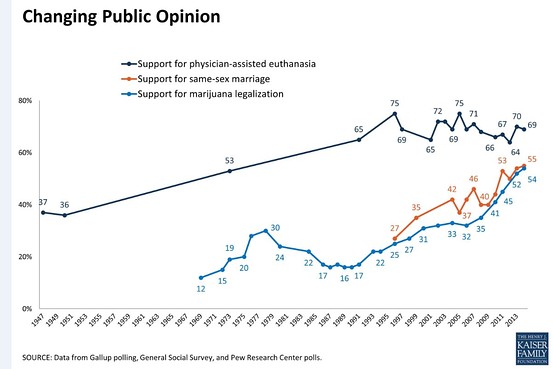 There are three areas of American life where public attitudes have been steadily changing, and the American people have been out in front of current-day politics, policy and law.

One is same-sex marriage. Gallup polls show a steady rise in support for the idea that marriage between same-sex couples should be recognized by the law with the same rights as other marriages. A Gallup poll in May put support at 55% and opposition at 42%. In 1996, Gallup found that 68% of Americans opposed same-sex marriage. Pew Research Center surveys report a similar trend.

Another issue is legalization of marijuana: Pew reported last year that, for the first time in four decades, a  majority of Americans–54%–favor legalization. In 1969, Gallup found 84% opposed.

On the third issue, physician-assisted euthanasia, there has been a gradual increase in agreement with the proposition that “doctors should be allowed to end a person’s life by some painless means if a patient or his or her family request it.” Gallup reports that support has climbed from less than 40% in the late 1940s, to 65% in 1990, to about 70% today. Support is lower when the issue is referred to as “physician-assisted suicide,” but there is still majority support.

There is always a chicken-and-egg question about what drives change in public opinion. Leadership can shape opinion (think of Martin Luther King and civil rights in an earlier era). So can developments such as the legalization of marijuana in Colorado and Washington state. Public attitudes are also influenced by the efforts of advocacy groups and by media coverage. As opinion shifts, advocates and leaders see opportunities to go further. Media coverage begins to reflect the changing reality. In this two-way street, it’s always hard to know what is cause and what is effect.

Change in opinion is, of course, not always sufficient to change policy. Vocal and politically active minorities can block change in many areas of American life even when majorities of the public support action. That seems to be the case, for example, on gun-control measures such as background checks and bans on assault weapons. It also matters whether people take their views to the ballot box. People may express a view to pollsters on, say, marijuana or same-sex marriage, but if they don’t vote on that view elected officials are less likely to run on and adopt the policies they want. How–and how much–big shifts in public opinion influence the courts is a murkier question.

Still, policy and law have been changing quickly on same-sex marriage, change seems to be coming on marijuana, and a broader debate about end-of-life issues appears to be beginning in earnest. When public sentiment shifts so steadily and clearly on social issues, perhaps the dam does eventually break.