Pulling It Together: Critical Path To Health Reform: Stage Two 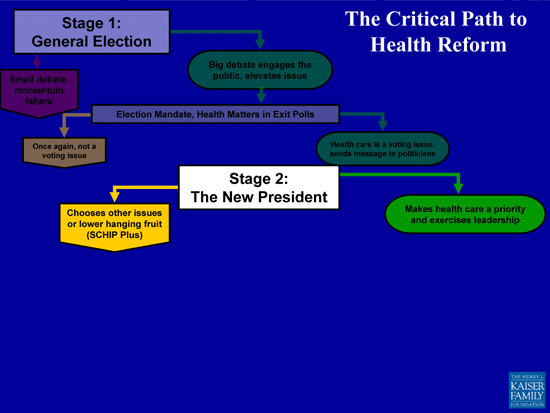 Will the new president make health a top early priority and exercise real leadership on the issue? One of the big lessons of the health reform debate of the early nineties is that the Congress needs to be fully engaged in the process early on. Nevertheless, for health reform legislation to stand a chance, a new President will have to make it an early and top priority and exercise real leadership. Given the history of failure on health reform and the chances of failure again, making comprehensive health reform a top early priority will not be a small decision for any President. No doubt advisors will argue both sides of the question. A tempting easier road, even for Democrats who have made universal coverage a cornerstone of their election campaigns, will be to attend to unfinished business first, and lead with a reauthorization of the SCHIP program, plus perhaps some additional incremental reforms. Let’s call this the SCHIP Plus scenario. In a world where progress has been hard to come by in health reform, this result will be satisfying to many. However, it will not be perceived as having accomplished comprehensive reform by many more (whether of a Democratic or Republican flavor). An SCHIP Plus strategy could be pursued as a first in a series of steps on health reform and might in fact play out that way. But there is only so much time in a presidential term before the focus on reelection takes over and only so much energy to devote to health care issues over other priorities.