Nearly 3 million Medicare Part D enrollees had out-of-pocket drug spending above the catastrophic threshold in a recent five-year period, finds a new KFF analysis that takes a comprehensive look at how many people on Medicare have drug expenses high enough to push them above that limit.

While the Part D drug benefit has helped make drugs more affordable for people with Medicare, the lack of a hard cap on annual out-of-pocket spending under Part D exposes enrollees to significant costs, unless they qualify for low-income subsidies.

While a relatively small number of enrollees exceeds the threshold in any given year, the new analysis shows that, over time, the number of beneficiaries with expenses above the cap grows — including beneficiaries who have persistently high drug costs over multiple years and people who have high costs in one year but not others. 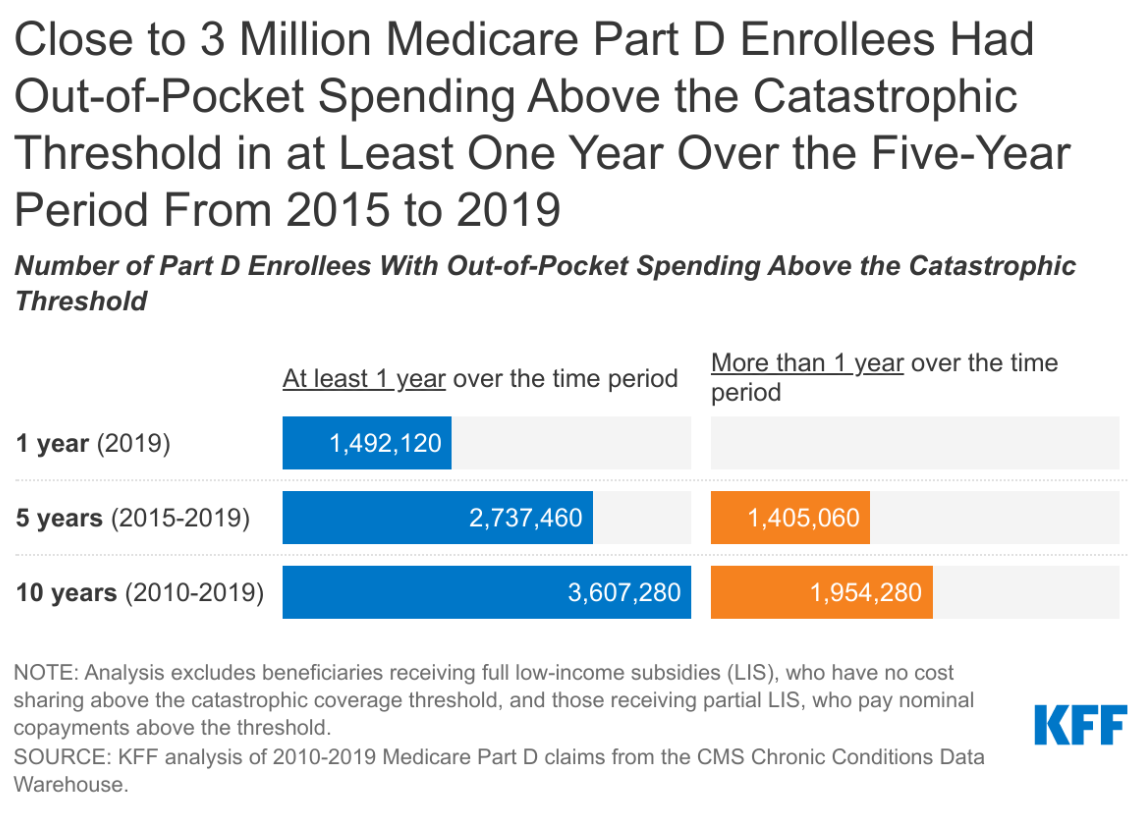 The study findings come amidst ongoing public concern about the high cost of prescription drugs, and as policymakers on both sides of the aisle support proposals in the House and Senate to modify the design of the Part D benefit and establish a hard cap on out-of-pocket drug spending by Part D enrollees.

The standard Part D benefit includes a catastrophic coverage threshold above which enrollees must pay five percent of their total drug costs out-of-pocket, with the rest covered mainly by Medicare. In 2021, the catastrophic threshold is set at $6,550 in out-of-pocket drug costs, an amount that includes what beneficiaries themselves pay plus the value of the manufacturer discount on the price of brand-name drugs in the coverage gap (aka, “donut hole”), which counts towards this amount.

That five percent coinsurance, however, can really add up. Medicare beneficiaries who take high-cost drugs for conditions such as cancer, multiple sclerosis, rheumatoid arthritis, or hepatitis C can pay thousands of dollars out-of-pocket for their medications after exceeding the Medicare Part D catastrophic threshold. Proposals to cap what beneficiaries pay could add costs to the program, unless combined with other policies to lower Medicare drug spending.

All told, Part D enrollees with drug spending above the catastrophic threshold at some point between 2010 and 2019 collectively incurred $9.9 billion in out-of-pocket costs for prescriptions filled in the catastrophic phase – representing more than one-third of their total out-of-pocket drug costs over the period ($26.1 billion).

Under H.R. 3, the Elijah E. Cummings Lower Drug Costs Now Act, out-of-pocket drug spending under Part D would be capped at $2,000, while under H.R. 19, the Lower Costs, More Cures Act, the House GOP prescription drug bill, and bipartisan legislation that passed out of the Senate Finance Committee in the 116th Congress (S. 2543, Prescription Drug Pricing Reduction Act of 2019, and the Senate Finance bill), the cap would be set at $3,100. Both amounts exclude the value of the manufacturer discount.

Also available is the newly updated brief, What’s the Latest on Medicare Drug Price Negotiations?, which describes the status of proposals to give the federal government the authority to negotiate drug prices in Medicare, including how the negotiation process would work under H.R. 3 and the expected effects on spending for Medicare, beneficiaries and people with private insurance.

For more data and analyses about Medicare and prescription drug costs, visit kff.org.