Analysis: The Vast Majority of Physicians Accept New Patients, Including Patients With Medicare and Private Insurance

Despite occasional anecdotal reports of people having trouble finding a doctor who takes their insurance, KFF researchers find in a new analysis that the vast majority of non-pediatric office-based physicians accept new Medicare patients, as well as new private insurance patients.

Eighty-nine percent of such physicians accepted new Medicare patients in 2019, and 91 percent accepted new private insurance patients, according to the analysis, which uses data from the federal 2019 National Electronic Health Records Survey (NEHRS). Among primary care physicians the rates are lower, but still comparable for new patients with Medicare (83%) and private insurance (86%).

In addition, the analysis found that roughly the same percentage of non-pediatric office-based physicians accepted new Medicare patients in 2011 (88%) as in 2019. And the share of physicians who accept new private insurance patients has risen considerably over the period — up 10 percentage points from 81 percent in 2011 to 91 percent in 2019.

The new analysis also contains state-level data. KFF researchers find that in 23 states, at least 90 percent of all non-pediatric office-based physicians accepted new Medicare patients in 2015-2017. Across all states the share ranged from 76 percent in Washington D.C. to 95 percent in three states (Iowa, Minnesota, and Pennsylvania), similar to the range for privately-insured patients.

The findings are notable because some proponents of doing more to contain health care costs have proposed adopting Medicare rates, or a multiple of Medicare rates, for those who now have private insurance, since Medicare rates tend to be lower. Skeptics of that approach – which could involve directly regulating prices, or creating a Medicare-like plan as a public option or as part of a single payer system — have raised concerns that moving towards Medicare rates would cause access problems. 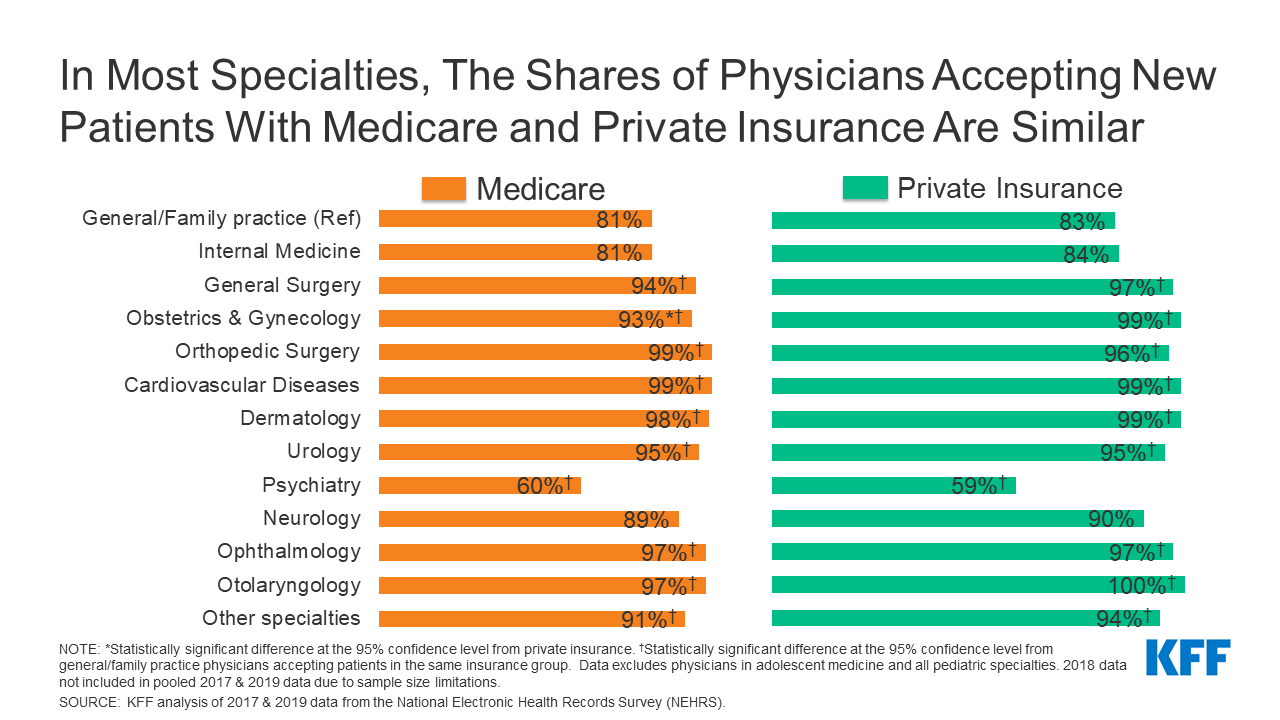 KFF analysts also find that a very small share (1%) of non-pediatric physicians formally opted-out of the Medicare program in 2022, with psychiatrists being the most likely to opt-out (7.5% ). In all states except for Alaska and Colorado, fewer than 2 percent of physicians have opted-out of Medicare.

The fact that the vast majority of physicians are accepting new patients does not mean that all patients will have access to all clinicians, since providers may only be in the networks of some private insurance or Medicare Advantage plans.

For more data and analyses about Medicare visit kff.org.