Although Their Share of the Market Varies By State, Enrollment in Medicare Advantage Plans Has More Than Doubled Over the Past Decade, with More than 4 in 10 Medicare Beneficiaries Now Enrolled in the Private Plans

The private plans known as Medicare Advantage now cover more than 4 in 10 Medicare beneficiaries, reflecting a more than doubling of enrollment over the past decade even as the plans remain a far larger presence in some states than others, according to a new KFF analysis.

More than 26 million of the nation’s nearly 63 million Medicare beneficiaries are enrolled in Medicare Advantage plans in 2021. The share varies considerably by state, ranging from less than 20 percent in Vermont, Maryland, Alaska, and Wyoming, to more than 50 percent in Minnesota, Florida, and Puerto Rico, the analysis finds. 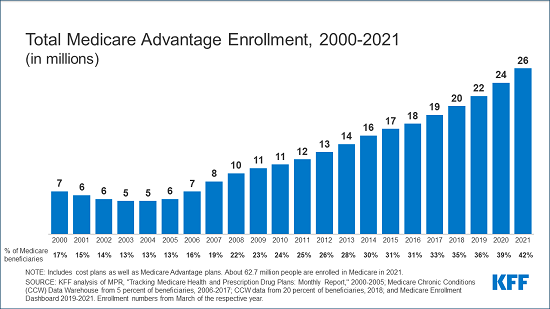 The new analysis is one of three released by KFF today that examine various aspects of Medicare Advantage, a type of Medicare coverage that the Congressional Budget Office has projected will cover 51 percent of all Medicare beneficiaries by 2030.

• Nine in ten Medicare Advantage enrollees are in plans that include prescription drug coverage and nearly two-thirds of these enrollees (65%) pay no premium other than the monthly Medicare Part B premium ($148.50 in 2021).

• Virtually all Medicare Advantage enrollees (99%) would pay less than the traditional Medicare Part A hospital deductible of $1,484 for an inpatient stay of three or fewer days. But for a six-day stay or longer, about half (53%) would incur higher costs than beneficiaries in traditional Medicare with no supplemental coverage.

• Most enrollees in individual Medicare Advantage plans have access to some benefits not covered by traditional Medicare, including eye exams and/or glasses (99%), telehealth services (94%), dental care (94%), a fitness benefit (93%) and hearing aids (93%). Other benefits are offered far less frequently, such as a meal benefit (55%), transportation (37%), and in-home support services (7%), and when they are offered, tend to be offered more frequently in special needs plans.

The full analyses are available online and include:

For more data and analyses about Medicare Advantage, visit kff.org