Without the Expansion and Resulting Infusion of Federal Funds, Non-Expansion States Expect Much Smaller Enrollment Increases and Spending Growth

MENLO PARK, Calif. – States expect the number of people enrolled in Medicaid will increase an average of 13.2 percent across the country in state fiscal year 2015 (which runs through June in most states), showing the early effects of the first full year of Affordable Care Act implementation, according to the 14th annual 50-State Medicaid budget survey by the Kaiser Family Foundation’s Commission on Medicaid and the Uninsured (KCMU).

The 28 states (including the District of Columbia) implementing the Medicaid expansion for FY 2015 expect to see the largest enrollment and spending growth — an 18 percent increase in enrollment and an 18.3 percent increase in total Medicaid spending in FY 2015, on average. The spending growth is mostly driven by the boost in new enrollment that is financed by 100 percent federal funds. With the additional federal dollars, state spending in expansion states is projected to increase at a slower rate of 4.4 percent in FY 2015.

Without the coverage expansion and federal funding, the 23 states not implementing the ACA Medicaid expansion project an average 5.2 percent enrollment growth for fiscal year 2015, and project state spending to increase at a similar rate as their total Medicaid spending (6.8% and 6.5%, respectively). 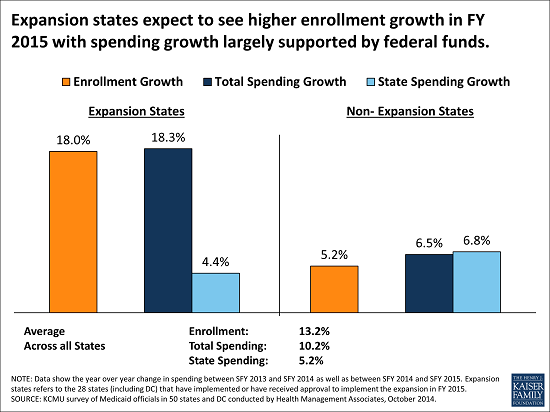 A second report drawn from the 50-state survey, jointly released with the National Association of Medicaid Directors (NAMD), examines major policy actions implemented or planned for state Medicaid programs.  It shows that the implementation of the ACA and delivery system reforms are the main focus for state Medicaid directors in fiscal years 2014 and 2015.

“Whether a state elected to expand or not, Medicaid programs across the nation are being transformed with new enrollment procedures and outreach efforts combined with increased emphasis on delivery systems reforms,” said Diane Rowland, Executive Vice President of the Foundation and Executive Director of the KCMU.

All states are implementing a host of ACA-related changes that require states to streamline Medicaid enrollment and renewal processes, transition to a uniform income eligibility standard and coordinate with new ACA insurance Marketplaces. State Medicaid officials reported continued growth in managed care initiatives and other delivery system reforms, including the implementation or expansion of Medicaid health homes, patient-centered medical homes, and initiatives to integrate care and financing for the dual eligible beneficiaries. The majority of states also reported expanding services in a home or community-based setting for persons needing long term care. With improvements in the economy, more states were implementing provider rate and benefit enhancements. 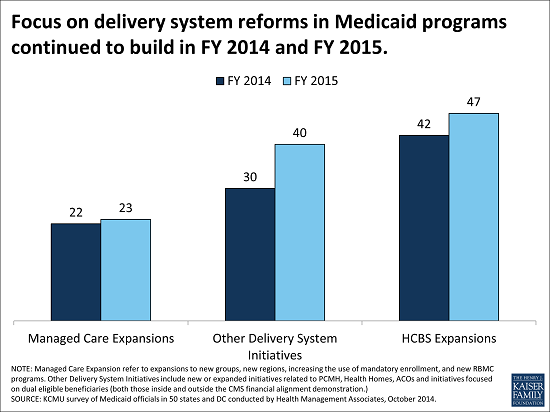 The 50-state survey of state Medicaid directors was conducted by KCMU and Health Management Associates (HMA), with the cooperation of NAMD. These and other findings from the survey were discussed today at a public briefing held jointly by Kaiser and the NAMD. The following new reports based on the survey are available:

An archived webcast of the briefing, as well as copies of presentation slides and other materials, will be available online later today.