States Are Planning for the End of the Continuous Enrollment Requirement in Medicaid After the COVID-19 Public Health Emergency Expires, But Many Have Not Made Key Decisions

As states plan for the end of the COVID-19 public health emergency, the resumption of eligibility redeterminations and disenrollments when the continuous Medicaid enrollment requirement is lifted could lead to coverage disruptions and losses, according to a new KFF 50-state survey.

The requirement, a condition of states receiving enhanced federal Medicaid funding during the pandemic, has helped drive Medicaid and CHIP enrollment to a record 85 million people, an increase of 19.1 percent since the start of the pandemic. It prohibits states from disenrolling individuals while the public health emergency is in effect, to cushion low-income people against the economic and health disruptions of the pandemic.

But with the public health emergency expected to expire in the coming months, the new survey of state Medicaid and CHIP officials finds that many state Medicaid programs still have not made key decisions about how to handle the resumption of eligibility redeterminations that will lead to the disenrollment of people who are no longer eligible and those who are eligible but do not complete renewal paperwork.

Only about half of states (27) said they had a plan for how they will prioritize outstanding eligibility and renewal actions when the continuous enrollment requirement is lifted, the survey finds. The states with plans in place have different strategies and approaches, with 11 states indicating that they will target enrollees who appear to be no longer eligible first, while nine plan to conduct fresh renewals on a rolling basis based on the month in which the individual’s annual renewal is due. Seven states have adopted a hybrid approach. States that prioritize re-checking the status of people who no longer appear to be eligible will likely generate coverage disruptions sooner than states that wait until enrollees’ standard renewal date arrives. 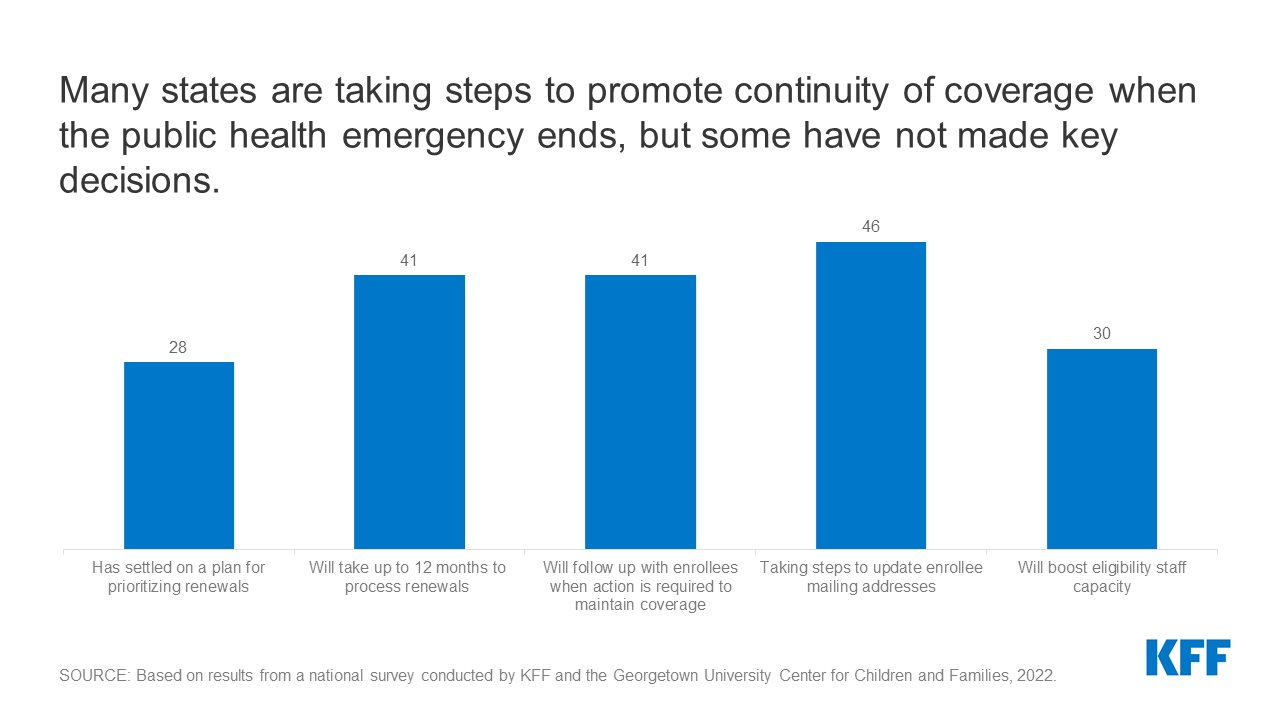 Such estimates suggest that millions of people will lose Medicaid coverage in the months following the end of the public health emergency. Many children will be eligible for CHIP and many adults will be eligible for Affordable Care Act (ACA) Marketplace or other coverage. Successfully transitioning such individuals into other coverage options could reduce the number who become uninsured.

Among other key findings from the survey:

These and other findings from the survey will be discussed today at a public web briefing. An archived video recording of the briefing will be available on kff.org later today. The public health emergency has been extended to mid-April, but the Biden Administration has indicated that states will have 60 days’ notice before it ends, so it is expected that the declaration will be extended again.

KFF conducted the 20th annual survey of states Medicaid and CHIP eligibility levels and enrollment and renewal policies in January 2022, with help from the Georgetown University Center for Children and Families. The survey presents a snapshot of actions states are taking to prepare for the end of the continuous enrollment requirement, as well as key state Medicaid enrollment and renewal procedures in place during the pandemic.

The full survey report, Medicaid and CHIP Eligibility and Enrollment Policies as of January 2022: Findings from a 50-State Survey, includes state-level data about Medicaid and CHIP eligibility in every state. Also available are other recent KFF analyses related to the end of the public health emergency, including Unwinding of the PHE: Maintaining Medicaid for People with Limited English Proficiency and Without Build Back Better, Will the End of the Public Health Emergency Leave Even More People Uninsured?