The Senate is currently considering the Obamacare Repeal Reconciliation Act of 2017. While there are a number of provisions that affect Medicaid, the primary change would be the elimination of the statutory authority to cover childless adults up to 138% FPL ($16,643 for an individual in 2017) as well as an elimination of the enhanced match rate for the Medicaid expansion. 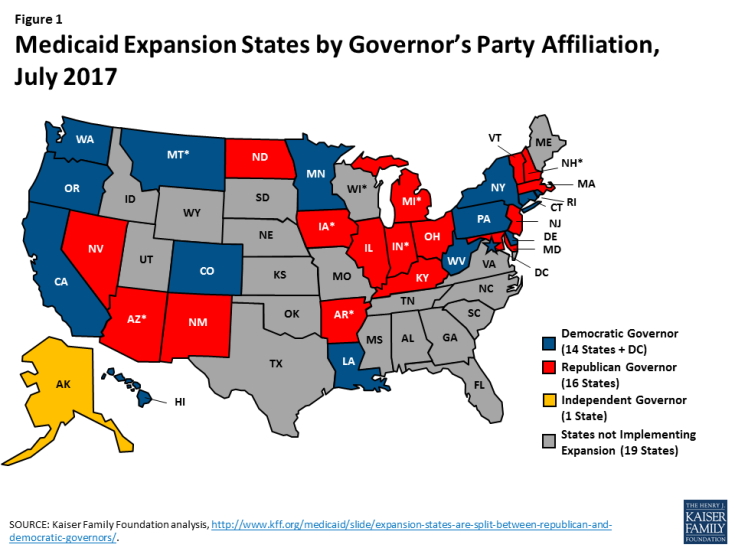 A repeal of the Medicaid expansion would have significant coverage and financing implications for the 31 states and the District of Columbia that have implemented the expansion (Figure 1). We estimated changes in federal Medicaid funds and Medicaid coverage for adults covered through the ACA expansion, assuming that the Medicaid expansion would be repealed as of 2020. We assume all states drop all expansion/Group VIII coverage, and the analysis does not account for continuation of expansion coverage in states that had waivers prior to the ACA (more detail on the methods underlying the estimates is in the Methods box below).

Our analysis shows that states would see a $700 billion reduction in federal Medicaid funds over the 2020-2026 period due to the loss of the ACA expansion (Table 1). In the last year of this analysis, 2026, states would see a reduction in federal Medicaid funds of $121 billion and estimated reductions in coverage of 17.6 million (19% of total Medicaid enrollment that year). In 11 states, the loss of the expansion would reduce Medicaid enrollment by 30% or more in 2026. In the absence of other affordable coverage, it is likely that most of these people would become uninsured, which would affect their access to health care services.