How Would Proposed Changes to Medicaid and Marketplace Coverage Affect Real People?

The Better Care Reconciliation Act of 2017 (BCRA), as amended on June 26, 2017, would make significant reductions in Medicaid and changes to coverage in the nongroup market. The BCRA would phase out the enhanced federal funding for the Medicaid expansion and would limit federal Medicaid funding through a per capita cap or a block grant. If these changes are enacted, it is expected that many of the 32 states (including DC) that have implemented the Affordable Care Act (ACA) Medicaid expansion would eliminate coverage for expansion adults. Moreover, states would likely cut Medicaid eligibility, benefits, and/or provider payments to respond to federal funding reductions created by caps. For people who purchase nongroup coverage in the marketplaces, the BCRA would increase premiums for older people and lead to higher deductibles and out-of-pocket costs for many enrollees. It also would make it easier for states to waive plan requirements to cover essential health benefits, which would make coverage for high cost services such as mental health, substance use, and maternity care more expensive or unavailable through the marketplaces. We recently spoke with people covered by Medicaid and marketplace plans in several states. Their stories provide examples of how the changes in the bill would affect real people:

Without Medicaid expansion, Tracy would lose his Medicaid coverage and access to services supporting his substance use recovery. Tracy is a 38-year-old full-time student pursuing a teaching degree in Albuquerque, New Mexico. Tracy lives on a very tight budget and cuts back on expenses where he can, sometimes going without a phone to save money. Tracy enrolled in Medicaid in 2015, when he was completing a recovery program for substance use. Before he got Medicaid, Tracy was uninsured. Tracy says that Medicaid provides him access to professional help for his recovery, enabling him to pursue his goal of becoming a teacher. With Medicaid, he is not afraid to go to the doctor and face high medical costs. Under BCRA, Tracy would likely lose his Medicaid coverage. Although he would be eligible for tax credits to purchase coverage in the marketplace with a modest premium, the plan would have a very high deductible, likely around $7,000. Because of his limited budget, Tracy does not think he would be able to afford even a small premium, much less a deductible representing nearly half of his income. Having to pay for health care services until he met the plan’s deductible would make it difficult for him to access needed health services, including the services that he receives to support his recovery. 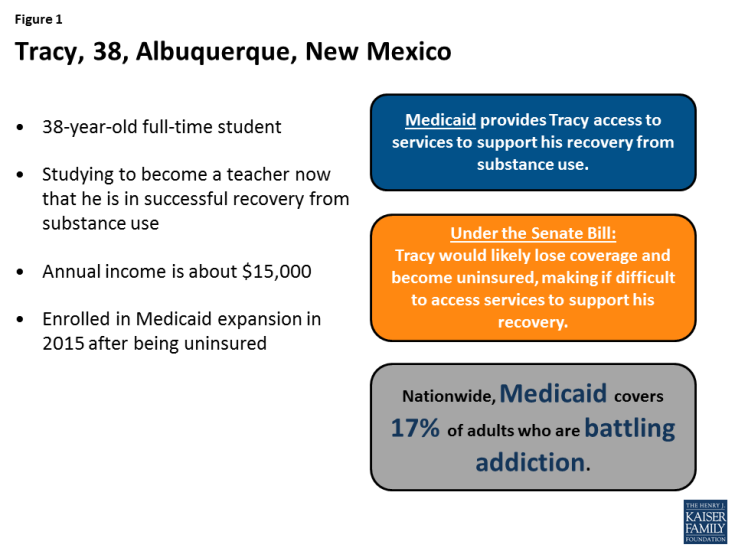 Cuts to Medicaid could leave Jackie and her three children without financial protection from high medical costs. Jackie is a 51-year-old mom of three teenagers who works part-time in a warehouse in Kansas City, Kansas. For the previous 16 years, she was a stay-at-home mom, while her husband worked and they lived a middle-class lifestyle. About a year ago, her husband became unemployed, and they are now divorcing. Today, she faces major financial stress as she tries to support her family on her own. She and her children enrolled in Medicaid about a year ago. Jackie never expected to be in a situation where she would need Medicaid, but is thankful it is there to provide financial protection for her family. Under the BCRA, reduced federal Medicaid funding could result in reductions in Medicaid eligibility and/or benefits. Jackie has absolutely no idea what she would do without Medicaid because she could not afford the premium or deductible for a private plan, even with tax credits available under the BCRA. 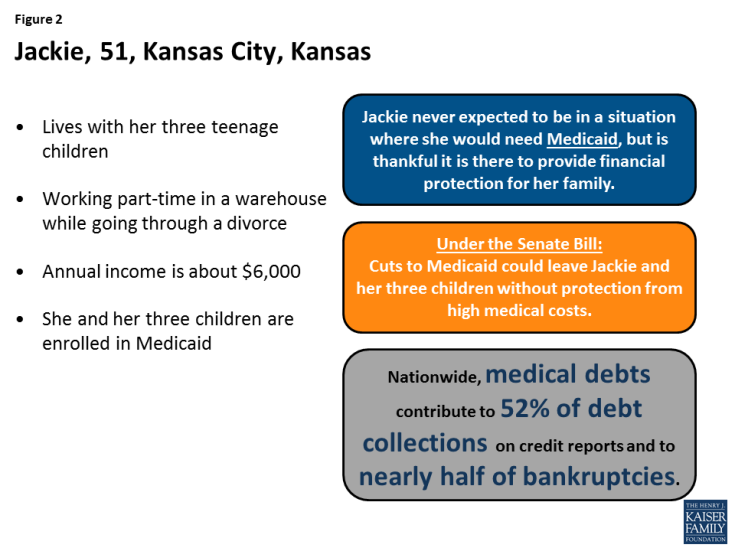 Cuts to Medicaid would leave Melodie and her daughter reliant on the emergency room for care. Melodie is a 23-year-old who works full time as a customer service representative in Richmond, Virginia. She lives with her daughter and is expecting her second child later this year. Melodie works overnight hours so that her mother can watch her daughter while she is working. Even with full-time work, she struggles to pay her bills every month. She and her daughter both enrolled in Medicaid after a period of being uninsured. She says that Medicaid enables her and her daughter to get the physical and mental health services they need. She is getting care for depression and anxiety as well as prenatal care. Her daughter receives behavioral health services for ADHD in addition to her well-child care and other physical services. Under the BCRA, reduced federal Medicaid funding could result in reductions in Medicaid eligibility and/or benefits. Melodie says that, without Medicaid, she would not be able to afford the premium for a private plan, and would have to put off care and rely on the emergency room for everything. 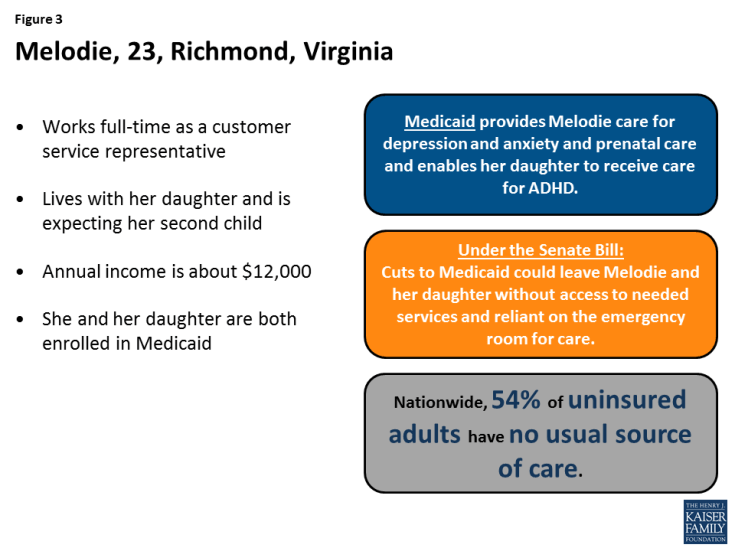 The elimination of cost sharing subsidies will mean higher out-of-pocket costs for Lori and her husband forcing them to forgo needed care. Lori, 43, lives with her husband and four children between ages 2 and 13. She works part-time and her husband works full-time, but neither has access to health insurance through their jobs. She and her husband purchase coverage through the marketplace, while their children are covered by Medicaid. They pay a $286 monthly premium after receiving a tax credit and have a $500 deductible. Under the BCRA, while Lori and her husband’s premium for a silver plan will remain about the same, they would likely see their deductible skyrocket to about $7,000 because of the elimination of the cost sharing subsidies. Lori says having health insurance is a priority for her and her husband, but the increased out-of-pocket costs will make it more difficult to afford the medications her husband needs to manage high cholesterol and attention deficit disorder. Proposed cuts to Medicaid funding could also affect her children’s coverage. 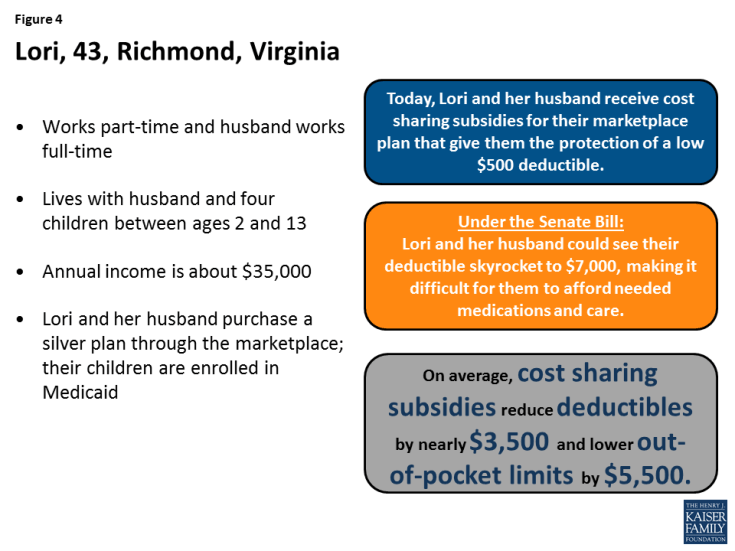 Coverage for maternity services could become more expensive or unavailable for Brandon and his wife. Brandon is a 32-year old independent government contractor who lives with his wife and young son in Kansas City, Kansas. He and his wife are expecting their second baby later this year. Because he is self-employed, Brandon purchases health coverage for his family through the marketplace. Their silver plan covers maternity services, although some costs are subject to the plan’s deductible. Brandon and his wife live in a state that did not require coverage of maternity care pre-ACA. If their state were to obtain a waiver to redefine the essential health benefits, their access to maternity coverage would be limited and they might have to pay hundreds of dollars more a month for a plan that covers maternity care. Brandon says they already put unexpected medical expenses on their credit cards. Having to pay a higher premium or to pay out of pocket for maternity care would likely lead to more credit card debt for his family. 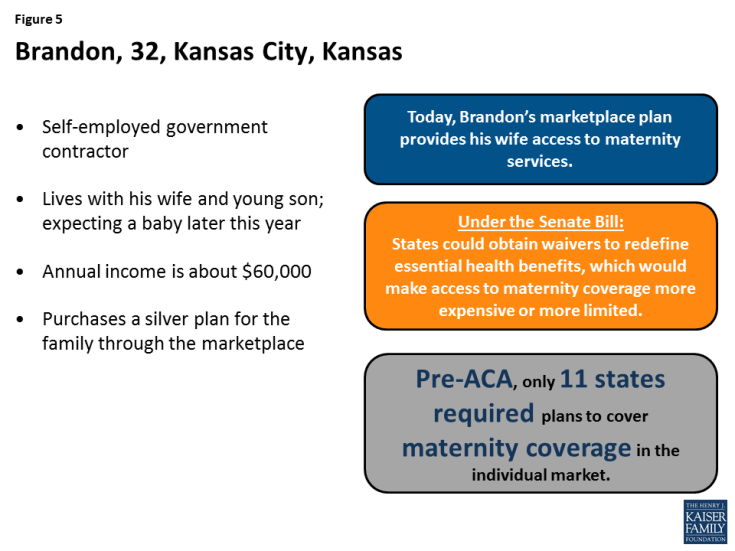 Changes to the structure of the premium tax credits under the BCRA would reduce Noelle’s monthly premium. Noelle is a 33-year old single adult who recently moved to Virginia where she is currently looking for work. Until she finds a new job, her income from a rental property is below the poverty level but above Medicaid eligibility because Virginia did not adopt the expansion for adults. Her boyfriend pays the premium for Noelle to purchase coverage through the marketplace. However, because her income is below the poverty level, she does not qualify for a tax credit to lower her monthly premium. Under the BCRA, Noelle would qualify for a tax credit that would reduce her monthly premium contribution to just over 2% of her income, resulting in savings of about $200 per month. Although Noelle is happy with her current coverage, she would like to pay less until she can find a new job. 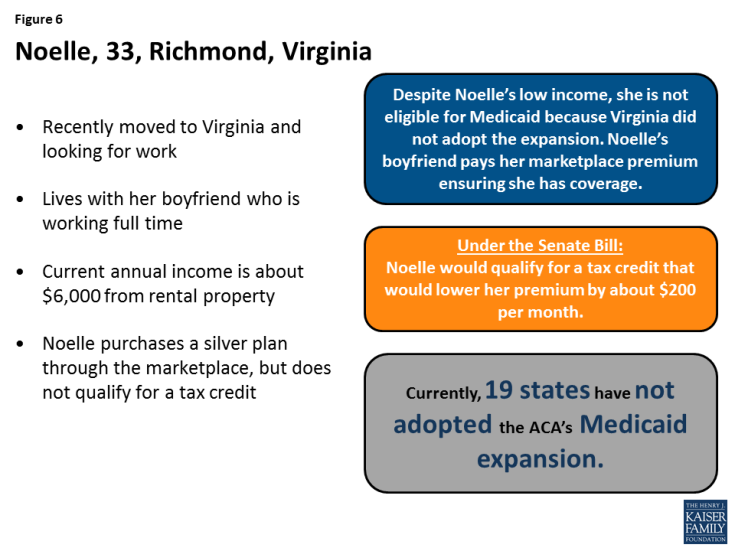