Federal funding for the Children’s Health Insurance Program (CHIP) expired on September 30, 2017. CHIP covers 8.9 million children in working families who earn too much to qualify for Medicaid but cannot afford or access private coverage. (See here for state Medicaid and CHIP eligibility limits for children.) This fact sheet provides an overview of state plans for CHIP as they grow closer to exhausting federal funds amid continued delay of Congressional action to extend funding. It is based on data collected from state Medicaid and CHIP officials by the Kaiser Family Foundation (KFF) and Health Management Associates (HMA) during November 2017, which updates data earlier reported in Summer 2017. The findings show that about three-quarters of states anticipate exhausting funding by the end of March 2018 and that several states have begun or will begin notifying families about coverage reductions before the end of 2017. As such, further delay in Congressional action is likely to result in confusion among families that could lead to coverage losses and administrative costs even if funding is extended in the next few weeks. See Appendix Table 1 for state data.

When Will States Run out of Funding?

Remaining funds available to states, including redistribution funds, are limited and anticipated to run out soon. Federal stopgap funds available to states include remaining federal funds from each state’s federal fiscal year (FY) 2017 CHIP allotment and redistribution funding from prior years provided by the Centers for Medicare and Medicaid Services (CMS) from a limited amount of unspent funds across all states. However, once states exhaust those funds, no additional funds will be available unless Congress enacts legislation. As of December 6, 2017, nine states have exhausted their FY 2017 allotments and have received redistribution funds from CMS to continue coverage. CMS is expected to release the final redistribution payments in the near-term, but these amounts will be insufficient to cover states’ FY 2018 CHIP shortfalls.1 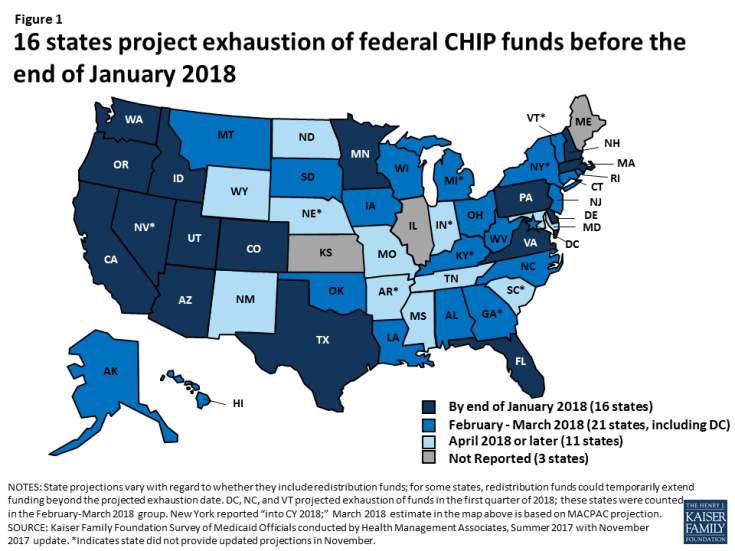 Figure 1: 16 states project exhaustion of federal CHIP funds before the end of January 2018

The majority of states will face a budget shortfall without an extension of federal funds because nearly all states assumed continued federal CHIP funding in their state fiscal year (SFY) 2018 state budgets. Because state budgets for SFY2018 have already been adopted, special legislative sessions and/or Governor action will likely be needed to address these shortfalls.

What are State Options to Respond to the Loss of Federal Funds?

State options to respond to the loss of federal CHIP funds vary based on how they have implemented their CHIP program. States have implemented their CHIP programs by creating a separate CHIP program, through a CHIP-funded Medicaid expansion, or using a combination of both approaches. Regardless of how states implement their program, they receive the enhanced (relative to Medicaid) matching rate for CHIP coverage, which was further increased by 23 percentage points under the Affordable Care Act (ACA). As of FY2016, about four in ten children covered through CHIP were in separate CHIP programs, and six in ten were in CHIP-funded Medicaid expansions.3

What are Current State Plans for Addressing the Loss of Federal Funds?

Many states with separate CHIP programs are planning to reduce coverage in response to the loss of federal funding, and several plan to begin notifying families before the end of the year. Overall, 14 of the 24 states that reported November 2017 data and have a separate CHIP program indicated plans to reduce or limit separate CHIP coverage for children or pregnant women, while most of the remaining 10 states reported they had not yet determined specific plans for reducing coverage. 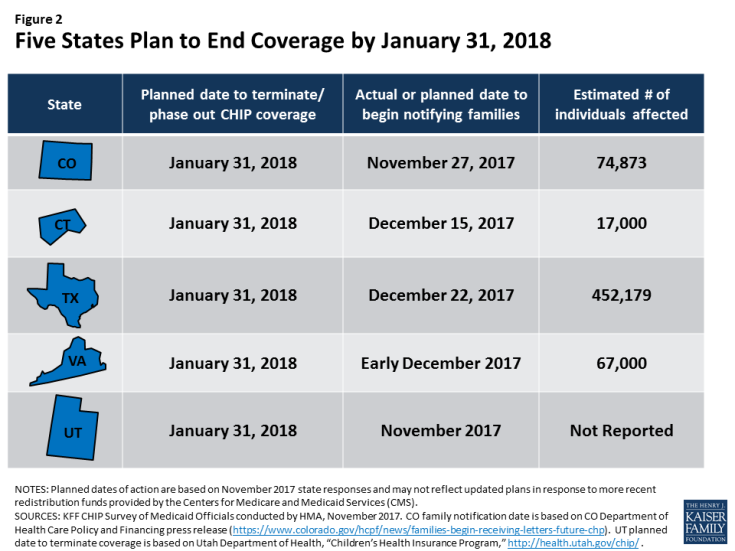 States with CHIP-funded Medicaid expansion coverage must determine how they will fund the increased cost of covering these children at the lower federal Medicaid match rate. States can address these shortfalls by reducing costs in Medicaid, making reductions in other areas of the budget, or increasing revenues (Box 1). States will face challenges replacing federal dollars since many were already facing shortfalls heading into SFY 2018.9

Alaska reported that it will request supplemental funding from the state general fund to address its estimated $7 million shortfall for SFY 2018.

Utah reported that it will end its separate CHIP coverage and that it requested approximately $11.3 million in additional funding from the state legislature to cover increased costs of its CHIP-funded Medicaid expansion coverage.

Hawaii reported that it would make reductions in other areas of the budget (outside of Medicaid/CHIP) and request an emergency appropriation for SFY 2018 to address its estimated $9.3 million shortfall.

How Will Coverage Reductions and Changes Affect Families and States?

Reductions in CHIP coverage will result in coverage losses for children and negative effects on children’s health and family finances. If states close enrollment and/or discontinue coverage for children in separate CHIP programs, some children could shift to their parents’ employer-sponsored plans or Marketplace plans, but others would become uninsured. Previously, some states closed enrollment in CHIP for limited periods in response to state budget pressures, and studies show that this led to coverage losses, left eligible individuals without access to coverage, and had negative effects on health and family finances (Appendix 2).

Multiple steps still remain for Congress to extend federal CHIP funding. As of early December 2017, the House had passed a bill to extend CHIP funding. In early October 2017, the Senate Finance Committee reported a bill out of committee to extend funding. However, the full Senate has not yet taken up action to extend funding. Final legislation still requires passage by the full Senate, resolution of any differences between the House and Senate bills, and signature by the President.

After Arizona froze CHIP enrollment in December 2009, enrollment fell by more than 60% from about 46,900 to 17,600 as of July 2011 (Figure 2).13 Just over four in ten disenrolled children moved to Medicaid due to declines in family income, but many others likely became uninsured.14 The children’s uninsured rate in Arizona grew following the enrollment freeze.15 Over the same period, the waiting list for CHIP grew to over 100,000 children and was continuing to grow at a rate of about 10,000 children per month.16 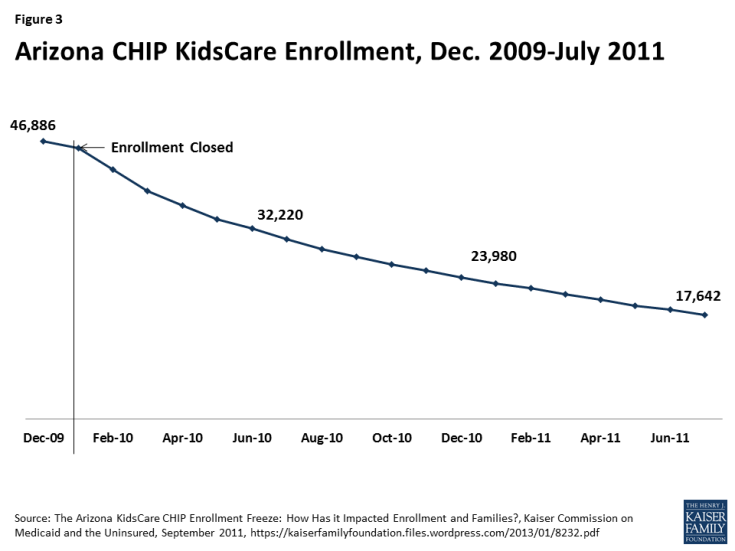 In North Carolina, enrollment fell by nearly 30% from about 72,000 to 51,300 when it froze enrollment between January and October 2001. The number of children determined eligible for CHIP but placed on a waiting list grew to over 34,000.17 Most (60%) children added to the waiting list were previously enrolled in Medicaid and were unable to transition to CHIP.

Enrollment freezes negatively affected children’s health and family finances. In North Carolina, parents with children affected by the enrollment freeze said their children experienced periods of being uninsured and that almost all needed care during the time that they lacked coverage.18 Parents often had to delay care while their children were uninsured and reported difficulties obtaining prescription medications for their children.19 Parents also reported that obtaining care while their children were uninsured resulted in significant financial hardships, requiring them to cut back on necessities, borrow money from family or friends, and accrue debt for missed payments on bills.20