The Commonwealth of Puerto Rico has been in the news spotlight for over a year due to the debt crisis that has followed a decade’s long recession, and to the rapid spread of Zika cases on the island, exceeding 19,000 as of September 21, 2016, and counting.1 Nearly half of the population (46%) in Puerto Rico lives below the federal poverty line, and the unemployment rate is more than double that of the 50 states and D.C. (12% vs. 5%).2,3 For a snapshot of Puerto Rico’s demographic characteristics, key health indicators, and a broader discussion of Zika on the island, see our 8 questions and answers about Puerto Rico fact sheet.

Roughly one in two Puerto Ricans (49%) are enrolled in the island’s Medicaid program, a rate more than double that of the 50 states and D.C. (19%).4 Puerto Rico provides Medicaid coverage through an island-wide public health insurance program, known as Mi Salud, the umbrella program for Puerto Rico’s Medicaid, CHIP, some Medicare, and some Puerto-Rico only funded coverage. The Puerto Rico Department of Health has a cooperative agreement with the Puerto Rico Health Insurance Administration (PRHIA), also known as the Administracion de Seguros de Salud (ASES), to administer Mi Salud.5 Puerto Rico’s Medicaid financing structure differs from that of the 50 states and D.C. in two important ways. First, federal funding to the program is subject to a statutory cap, and second, the island’s FMAP is fixed at 55% rather than being determined annually based on its per capita income. Under the ACA, Puerto Rico’s Medicaid program received increased federal funding through a $6.4 billion allotment as well as a modest increase in its federal match rate.

This fact sheet provides an overview of the Medicaid program in Puerto Rico and emerging fiscal issues facing its health care system as Zika cases on the island continue to mount.

Medicaid and the ACA in Puerto Rico

Unlike the 50 states and D.C., annual federal funding for Puerto Rico’s Medicaid program is subject to a statutory cap. Federal matching funds for Medicaid in the 50 states and D.C. are not capped.  However, federal Medicaid funding in Puerto Rico and the other territories are subject to a statutory cap, meaning that once federal funds are exhausted, the island no longer receives financial support for its Medicaid program during that fiscal year. In 2014, the allotment was capped at $321 million, and the island generally exhausts its capped allotment prior to the end of its fiscal year.6

In addition, Puerto Rico’s federal match rate is fixed in federal statute. States and the federal government jointly finance the Medicaid program according to an established formula that provides guaranteed matching funds. In the 50 states, the Federal Medical Assistance Percentage (FMAP) is determined by a formula set in statute that relies on states’ relative per capita income. For federal fiscal year 2017, the FMAP ranges from a floor of 50% to a high of 75% for Mississippi, the poorest state in the country.7 Puerto Rico and the other territories receive a match rate that is fixed in statute and unrelated to per capita income. Before 2011, Puerto Rico and the other territories received the statutory minimum FMAP of 50% despite the fact that per capita income in 2014 was nearly half what it was in Mississippi ($11,331 vs. $21,036).8

The ACA also made additional funds available to Puerto Rico, totaling nearly $6.4 billion. The $6.4 billion consists of a $5.5 billion allotment available between July 2011 and September 2019 and another $925 million the island received in lieu of funds it would have received for creating its own Marketplace. These funds are also available through FY 2019 and can only be accessed after the first source of ACA funding has been depleted. In 2014, the ACA funds accounted for the majority of federal Medicaid funds expended (68%) (Figure 1).11 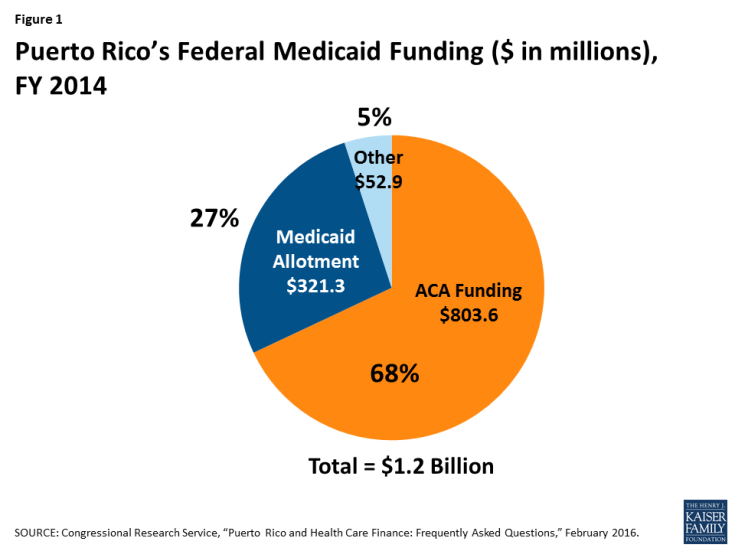 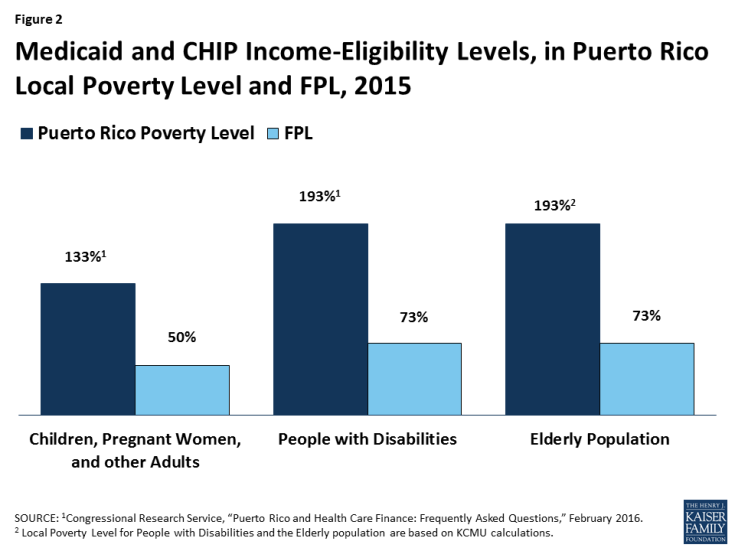 Despite being subject to the same mandatory benefit requirements as the 50 states and D.C., Puerto Rico does not currently cover all mandatory Medicaid benefits. There has not been a comprehensive analysis of the benefits covered under Puerto Rico’s Medicaid program; however, several sources point to some services that are not covered by the program. For example, Puerto Rico currently lacks the infrastructure and funds necessary to offer long-term care in nursing facilities and home health services,15,16 and does not cover hospice care or medical equipment and supplies.17 In addition, limited benefits are provided to children under the Early and Periodic Screening, Diagnostic, and Treatment (EPSDT) benefit.18

Puerto Rico’s safety net providers play an important role in delivering health care to the island’s most vulnerable populations. In 2014, Puerto Rico had 20 federally-funded community health centers, with 71 sites across the island. These sites serve nearly 340,000 patients (roughly 10% of the population), 12% of whom are uninsured.20 However, the distribution of available clinical resources and health care professionals is focused in large metropolitan areas across the island, while the outlying communities and rural areas have limited access to care and treatment.21 Notably, Puerto Rico and the other territories are ineligible for Medicaid Disproportionate Share Hospital (DSH) Subsidies, limiting the amount of resources available to the island’s safety net.22

ACA funding is estimated to be exhausted by the end of FY 2017. Puerto Rico has relied heavily on the nearly $6.5 billion in one-time ACA funds which were made available to the island in July 2011. While these funds are set to expire in September 2019, the island is expected to have exhausted them by the end of FY 2017.23 Absent reauthorization, up to 900,000 people (26% of the island’s population) could lose their health coverage.24

Inequities related to the island’s Medicaid finance structure, particularly the federal cap, have been acknowledged by various federal entities; however, no legislative action has been taken to date. The statutory cap on Puerto Rico’s Medicaid program combined with its low FMAP of 55% limits the island’s ability to offer certain mandatory Medicaid benefits and adds additional financial strain to its fragile economy. Acknowledging these difficulties, President Obama’s proposed budget for FY 2017 removed the cap and proposed gradually increasing the FMAP;25 however, this provision was not included in the final approved budget for FY 2017. Similarly, in August 2016, Treasury Secretary Lew and HHS Secretary Burwell sent a letter to the Congressional Task Force on Economic Growth in Puerto Rico urging Congress to remove the federal cap and increase the program’s FMAP. In the letter, the Secretaries stated that this proposed policy change, which has been analyzed for comparative effectiveness relative to other proposals, is one of the most powerful ways to support economic growth and long-term stability on the island.26 To date, no legislative action has been taken to reform the island’s Medicaid financing structure.

The number of Zika cases on the island continues to mount. In August 2016, the U.S. Department of Health and Human Services declared the Zika outbreak in Puerto Rico a public health emergency, signaling the significant threat the virus poses to pregnant women and children born to infected pregnant women on the island. The declaration allows the Commonwealth to apply for funds to control the spread of Zika and request the temporary reassignment of local public health departments and personnel to assist in Zika response.27 President Obama’s emergency Zika funding request in February 2016 included a temporary one-year increase of approximately $250 million to Puerto Rico’s federal Medicaid matching funds, but no emergency Zika package has been passed by Congress to date.28 Financial constraints have complicated the timely and comprehensive response required to respond to the outbreak.29 Given the critical role Medicaid plays for people with disabilities, the serious and costly health effects of Zika in Puerto Rico may place further demands on a program already facing steep funding shortfalls. According to the CDC, the dollar amount of caring for a single child with birth defects is estimated to be in the millions.30

The debt crisis has exacerbated many of the island’s health care issues. As a result of the debt crisis, the government has instituted strict austerity plans that have led to budget cuts to public programs and more severe poverty.31 Delayed payments by the government to Medicare and Medicaid managed care plans have caused a cascade of payment delays to medical providers and suppliers, and there have been reports of power and water shortages in hospitals, delays in the arrival of medical supplies, the laying off of hospital workers, and the closure of hospital floors and service areas.32,33,34,35 The debt crisis has also contributed to health provider shortages, as specialists and subspecialists leave the island for better opportunities on the U.S. mainland,36,37,38 resulting in longer waits for procedures and overcrowded emergency rooms.39 After several months of congressional debate, the Puerto Rico rescue bill known as PROMESA was signed into law on June 30, 2016. The law places Puerto Rico’s fiscal affairs under a federal oversight board, allows for the restructuring of some of Puerto Rico’s debts, and includes a temporary stay on bondholder lawsuits.40 While the law represents a first step toward economic recovery, it does not address the critical issues facing Puerto Rico’s health care system, including the impending expiration of ACA funding, the limits imposed by the capped Medicaid financing structure, or the mounting cases and future consequences of Zika on the island.