Mapping the Effects of the ACA’s Health Insurance Coverage Expansions

The Affordable Care Act includes several provisions that allow many individuals across the U.S. to be eligible for Medicaid or for federal tax credits to subsidize the cost of insurance. The analysis below and zip code tool estimate the share of the population in geographic areas across the U.S. who had family income up to four times the poverty level in 2010 and were either uninsured or buying coverage on their own.

see how many could benefit in your area

who benefits from the affordable care act coverage expansions?

Percentage of the Nonelderly Population With Income Up to Four Times the Poverty level Who Were Uninsured or Purchasing Individual Coverage, 2010 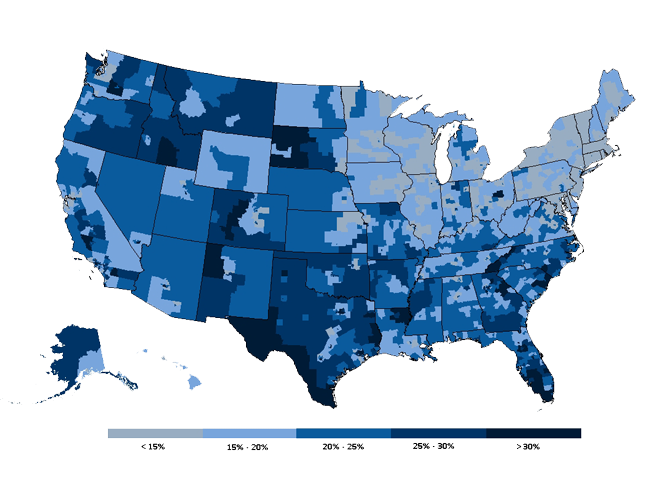 Starting in 2014, most people who are uninsured or buying individual insurance with incomes up to four times the poverty level ($92,200 for a family of four and $44,680 for a single person in 2012) will be eligible for expanded coverage through Medicaid or tax credits to subsidize the cost of private insurance.

This analysis was prepared by Gary Claxton, Anthony Damico, Larry Levitt, and Rachel Licata of the Kaiser Family Foundation.

The Affordable Care Act (ACA) generally provides financial assistance, either through Medicaid eligibility or tax credits for private health insurance, to people with incomes up to 400% of the poverty level and who do not have access to public health coverage or affordable coverage through an employer-sponsored health plan.  The percentages shown represent the share of people under age 65 who are in families with incomes up to 400% of federal poverty who at the time they were surveyed either (1) were not covered by public or private health insurance or (2) were covered by health insurance that they purchased directly and were not covered by any other type of public or private health insurance.  Coverage by the Indian Health Service was not considered as public or private health insurance.  People in institutions or who are active duty military were excluded from the analysis.  Unauthorized immigrants will be ineligible for expanded Medicaid coverage and for subsidized coverage in exchanges, but the ACS does not identify the legal status of non-citizens. To account for this, we assumed that 46% of non-citizens who would otherwise be eligible for assistance would be ineligible due to their immigration status. This assumption was derived from Department of Homeland Security estimates that there were 10.8 million unauthorized immigrants in the U.S. in 2010 and 12.6 million legal permanent residents who were not citizens.

The percentages are shown by Public Use Microdata Areas (PUMA), which are statistical geographic areas defined for the tabulation and dissemination of certain census data.  PUMAs are built on counties and census tracks within states and each one contains about 100,000 people. Standard errors range from 1-4% within PUMAs.

For this analysis, family income is based on the census definition of primary families, which are people within a household related to the head of the household.   This differs from some other analyses produced by Kaiser and others that aggregate income by health insurance unit, which generally includes members of a nuclear family who are able to purchase health insurance as a family.  Generally, using the census definition of family rather than health insurance units will result in a slightly lower estimate of the number of people who would benefit from the financial subsidies under the health reform because it produces a lower percentage of the population with incomes below or including 400% of poverty.

The share of the population who will benefit from new Medicaid eligibility and the new health insurance tax credit will vary substantially throughout the country. We've illustrated that variation by estimating the share of the population in over 2,000 geographic areas across the U.S. who had family income up to four times the poverty level in 2010 and were either uninsured or buying coverage on their own.

On average, an estimated 17% of the non-elderly population nationwide would benefit from the Medicaid expansion and tax credits. In parts of Florida, New Mexico, Texas, Louisiana, and California, 36-40% of population could benefit.  In areas of Massachusetts, Hawaii, New York, and Connecticut – states that generally have high levels of employer-provided health insurance or have already implemented reforms to make insurance more accessible and affordable – 2-4% of the non-elderly could benefit from the coverage expansions in the ACA.

These estimates are best viewed as a way of comparing what share of the population will benefit from the ACA across geographic areas, rather than as precise projections of the effects of the law. For example, some people who are currently uninsured with family incomes up to four times the poverty level may already be eligible for Medicaid but haven't enrolled and others may be ineligible due to their immigration status. Or, some may have access to employer coverage, which means that they would not be eligible for a tax credit if that employer coverage is affordable. Also, some people who are already insured with employer coverage may have incomes low enough to qualify for Medicaid, or the coverage they receive through the employer may be unaffordable, making them eligible to apply for subsidized coverage through exchanges.

In addition to the provisions that help people pay for coverage, there are other elements of the ACA that could benefit people regardless of income, such as: guaranteed access to insurance regardless of pre-existing conditions; a limit on out-of-pocket costs in all insurance plans; preventive benefits with no patient cost-sharing; and allowing parents to cover children on their insurance plans up to age 26. On the other hand, there will be some people who perceive themselves as worse off under reform, such as those who choose not to purchase coverage and must pay a penalty under the individual responsibility provision.