With a new outbreak reported in the Democratic Republic of Congo (DRC) in May 2018, the Ebola virus is again in the news; four years have passed since the emergence of a major epidemic in West Africa in 2014 that eventually killed over 11,000 people. Counting the current outbreak, DRC has experienced a total of 9 outbreaks of Ebola since 1976, including one just last year. The current outbreak is generating a growing international response, including funding and technical assistance from the World Health Organization (WHO) and other global health organizations.

Ebola virus has a unique set of characteristics that determines its spread and how deadly it is. To better understand Ebola, we pose five key questions about Ebola and compare it to twelve other infectious diseases that represent public health challenges today. These different diseases vary in terms of how they are spread, how deadly they are, and whether there are vaccines, treatments, or cures to address them.

1. How is Ebola transmitted? 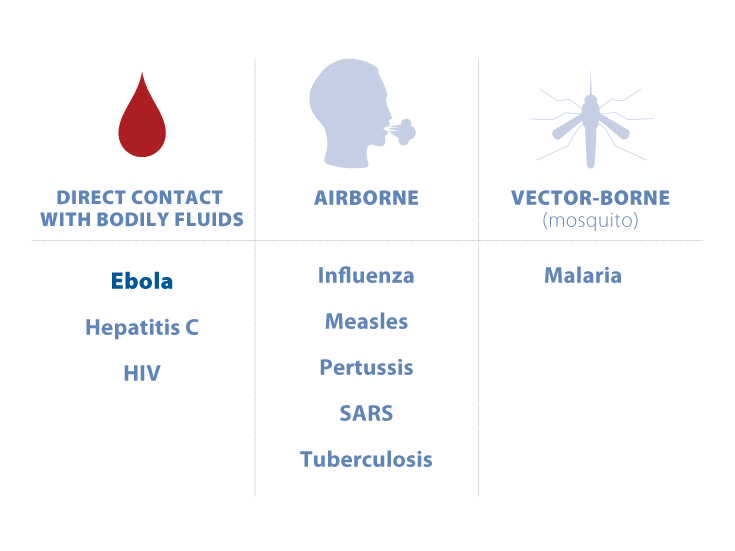 How an infectious disease is transmitted – whether through direct contact with bodily fluids, through air, or other means, as well as whether human-to-human transmission is possible – is important for understanding how to prevent and track the disease. Ebola is transmitted only through direct contact with bodily fluids, as are HIV and Hepatitis C.  Other diseases, such as measles and SARS, are transmitted through airborne means.  Human- to-human transmission occurs for all of the diseases included in this profile except for malaria, which is transmitted by mosquitoes to humans.

2. Is asymptomatic transmission of Ebola possible? 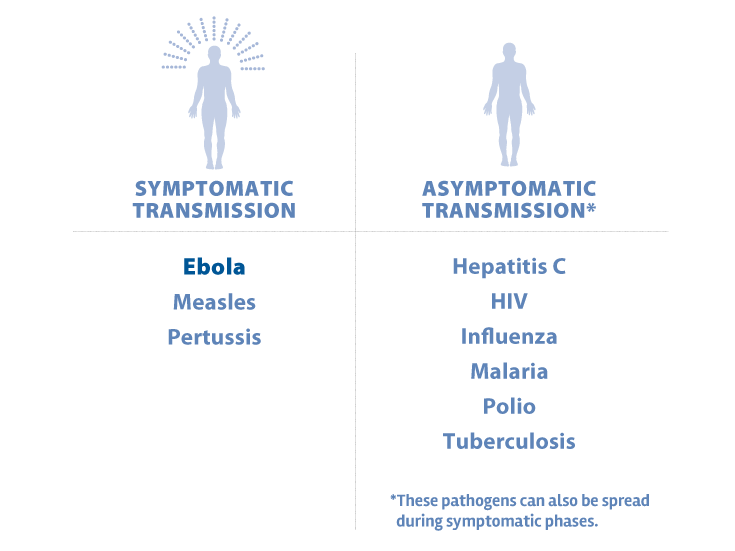 3. How long is Ebola’s incubation period? 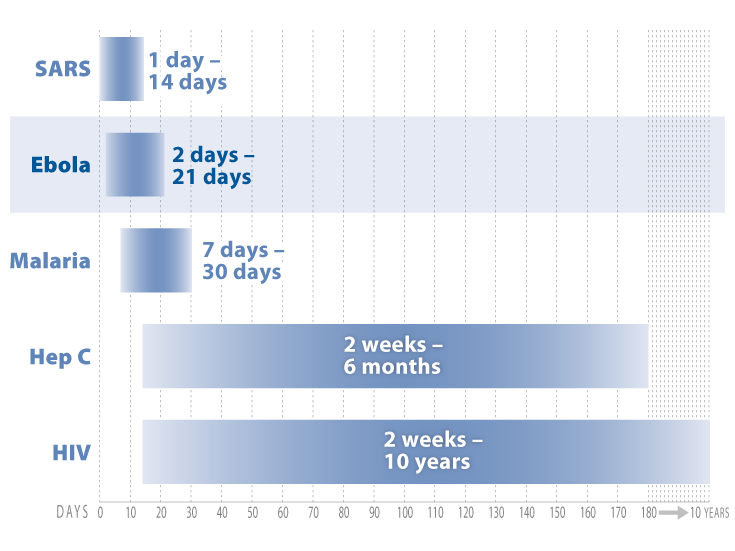 4. Is there a vaccine, treatment, or cure for Ebola? 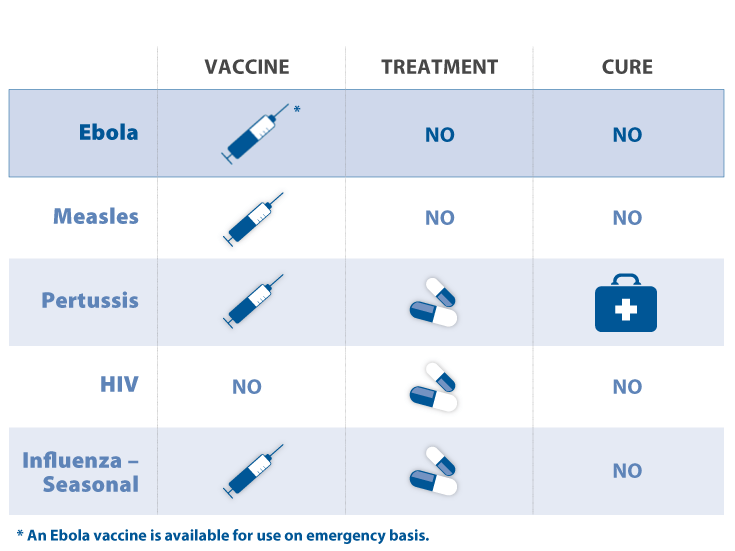 Currently, there are no approved treatments for Ebola (other than highly experimental treatments, and treatments for its symptoms), and no cure at the moment. An Ebola vaccine, developed since the 2014 West Africa epidemic, is now available in limited quantities on an emergency use basis; WHO and DRC have agreed to use this vaccine in the effort to combat the current outbreak.

Other diseases have treatments but no vaccine and no cure (such as HIV), while still others have vaccines and treatments (such as influenza). 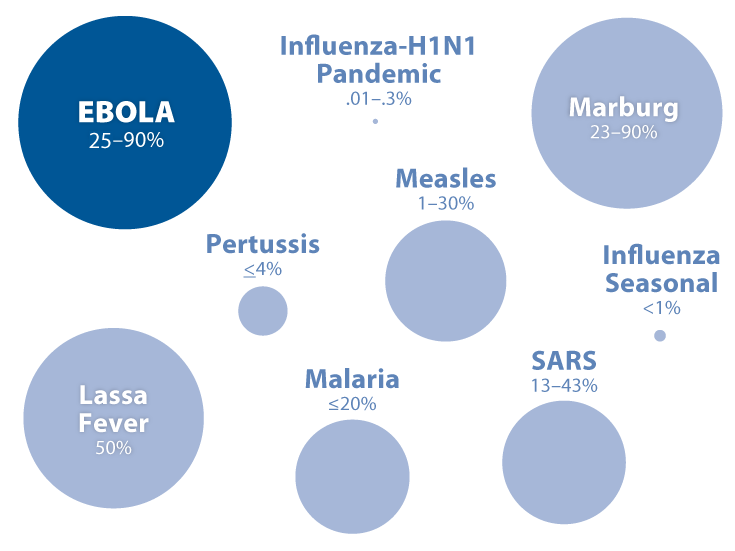 Ebola is one of the most deadly infectious diseases we know of, causing death in approximately 50 percent of people who become infected (its estimated case-fatality rate). Still, case fatality rates can differ across different outbreaks, and for Ebola it has ranged from 25% to as high as 90% in previous outbreaks. Case fatality rates for other diseases are much lower, including those for seasonal influenza (less than 1%) and SARS (13-43%). 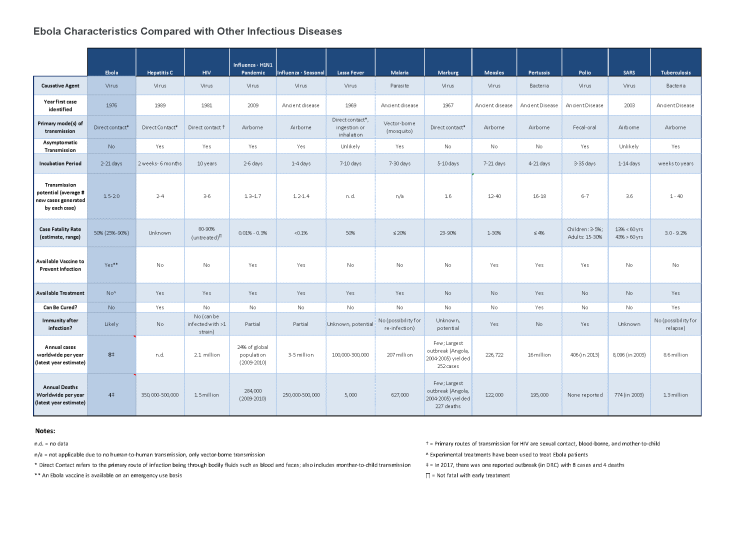