“Through Love of Self, Family and Community, Empowering Black Women to End AIDS”

MENLO PARK, CA, May 1, 2014 – Fifteen time Grammy Award-winning artist and HIV advocate Alicia Keys will join with Greater Than AIDS and ESSENCE to headline a special ESSENCE Empowerment Experience panel on Friday, July 4th (specific time to be announced) in New Orleans on “Through Love of Self, Family and Community, Empowering Black Women to End AIDS.”

The hour-long program will open with a one-on-one with Ms. Keys about her passion for ending AIDS to be followed by an engaging and inspiring conversation with women whose lives have been touched by HIV and how they responded.  Among those joining Ms. Keys on the stage in conversation:  Kym, a young professional who found out she was positive when her new husband became sick and died as a result of HIV/AIDS, and Teresa, a mother whose unconditional love of her HIV positive son has helped him to maintain his treatment and thrive in the face of this disease.  At the close of the program the panel will respond to questions from the audience.

The ESSENCE Empowerment Experience is part of the hugely popular ESSENCE Festival, one of the largest and most powerful gatherings in the nation. Prominent cultural icons, celebrities and community leaders convene for thought provoking conversations on health, education, politics, love and relationships, to offer solutions for the audience’s day-to-day lives. The Empowerment Experience is free to Festival attendees and the New Orleans community.

Of the more than 1.1 million people living with HIV in the United States today, one in four is a woman.  Women of color have been especially hard hit, accounting for the majority of new infections occurring among women in this country.  If current trends continue, it is estimated that one in 32 Black women will contract HIV in her lifetime.

The program is presented as part the Empowered campaign, launched in 2013 by Greater Than AIDS and featuring Ms. Keys  to reach women about HIV/AIDS and the role we all play in helping to end the epidemic. Through targeted media messages, community outreach and special promotions, the campaign promotes specific ways women are empowered in the face of HIV/AIDS, including:

The program is organized by ESSENCE together with Greater Than AIDS co-founders, the Kaiser Family Foundation and Black AIDS Institute, and Alicia Keys Worldwide.  Gilead Sciences, Inc. contributed financial resources to support the program.

Over the three days of the ESSENCE Festival, July 4-6, in the Convention Center, Greater Than AIDS together with the Louisiana Office of Public Health and the Black AIDS Institute will provide free daily on-site HIV testing as well as a photo / video booth and other activations to bring attention to the impact of HIV.  (Greater Than AIDS Booth #1800 in Hall D.)

For more information about Greater Than AIDS and the Empowered campaign, including for more details about Alicia Keys’ appearance at the 2014 ESSENCE Empowerment Experience, visit:  www.greaterthan.org/empowered. 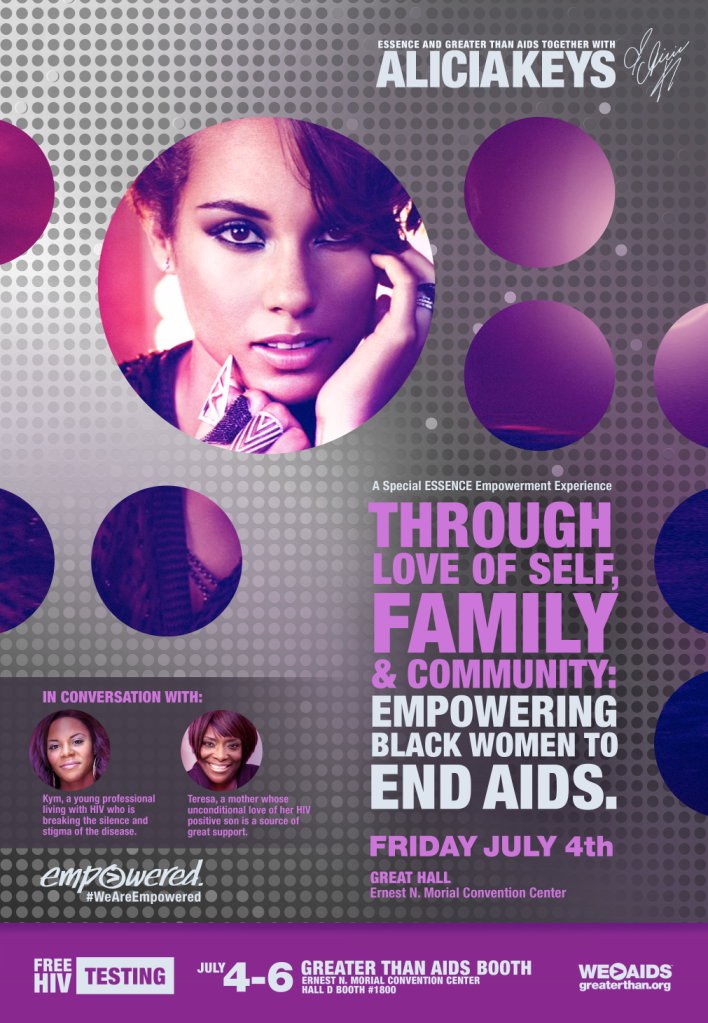 About the ESSENCE Festival and ESSENCE Empowerment Experience

The ESSENCE Festival has become one of the most powerful African-American gatherings as it represents not only our brightest stars but provides inspiration, purpose and enlightenment through its empowerment programming. The ESSENCE Empowerment Experience features engaging content that brings “the pages of ESSENCE to the stage” with our most prominent cultural icons, celebrities and community leaders who provide various modes of thought and solutions for our audience within our daily, themed discussion.  The free Experience has become the daytime destination of the ESSENCE Festival that has made history by having Bill Cosby, Iyanla Vanzant, Tyler Perry, Steve Harvey, Bishop TD Jakes, Soledad O’Brien, Jada Pinkett Smith, Hill Harper, Valerie Jarret, former Secretary of State Hillary Rodham Clinton, Marc Morial, and many others share the stage.

Last year, with a record-breaking audience of more than 545,000 Festival-goers, attendance at thedaily Empowerment series reached maximum capacity  for thought-provoking conversations on love and relationships, health, education, politics and our all-star inspirational Sunday Gospel tribute.  Our media partner MSNBC engaged many of our Empowerment speakers in interviews as they broadcast live from the ESSENCE Festival convention center floor throughout the weekend.

Greater Than AIDS is a leading national public information response focused on the U.S. domestic epidemic. Launched in 2009 by the Kaiser Family Foundation and Black AIDS Institute, Greater Than AIDS is supported by a broad coalition of public and private sector partners.  Through targeted media messages and community outreach, Greater Than AIDS and its partners work to increase knowledge, reduce stigma and promote actions to stem the spread of the disease.  While national in scope, Greater Than AIDS focuses on communities most affected.  www.greaterthanaids.org

Alicia Keys is a 15 time Grammy Award® winning singer/songwriter/producer, actress, New York Times best-selling author, entrepreneur and humanitarian. Since releasing her debut album, songs in A minor, Keys has built an unparalleled repertoire of hits with over 30 million albums sold worldwide. As a philanthropist, Keys co-founded Keep a Child Alive (KCA) which provides AIDS treatment, support, nutrition and love to children and families affected by HIV/AIDS in Africa and India.