As many employers begin to expand their wellness programs under new guidelines set forth by the Affordable Care Act (ACA), the latest Kaiser Health Tracking Poll finds workers oppose programs that make them pay higher premiums if they fail to participate or meet specific health goals.

The results are similar among working-age adults who get their insurance through an employer. A large majority (80%) is supportive of wellness programs themselves, but most oppose requiring workers to pay higher premiums if they don’t participate (62%) or if they don’t meet certain health-related goals (75%). 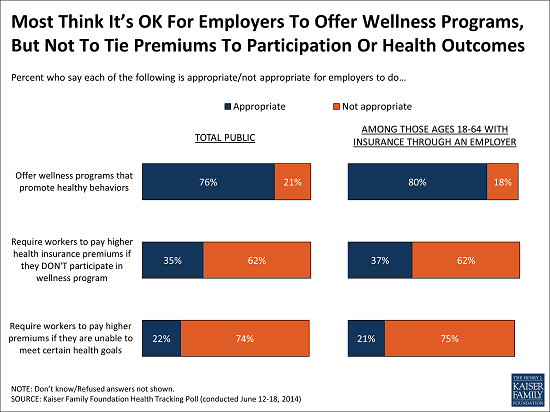 For many years, employers have offered a wide range of wellness programs to their workers, and some have recently started using financial rewards or penalties as incentives to get workers to participate and to meet specific health outcomes such as lose weight or meet a body-mass index target. The Affordable Care Act includes provisions that permit certain financial incentives and penalties related to health outcomes as part of employer wellness programs, and federal rules published last year set standards for such programs.

Overall public opinion of the ACA remains about the same as it has for the last several months, with a somewhat higher share of the public continuing to express an unfavorable view of the law (45%) than a favorable one (39%). Views continue to be polarized by political party, with a large majority of Democrats having a favorable view (66%), a large majority of Republicans unfavorable (74%), and independents in the middle but mostly negative (31% favorable, 53% unfavorable).

In addition, this month’s Health Policy News Index finds more than six in 10 (62%) say they followed news about long waiting lists for those seeking care at Veterans Affairs (VA) medical facilities closely. That makes the VA story the most closely followed health story in the first half of 2014, with slightly more people following it than followed several ACA enrollment stories earlier this year.

That finding is perhaps not surprising given negative media coverage, however, among those who have served in the U.S. military or have a veteran in their household, even larger shares say the care at VA medical facilities is worse than most Americans receive (53%) and worse than veterans would receive from private doctors and hospitals (53%). 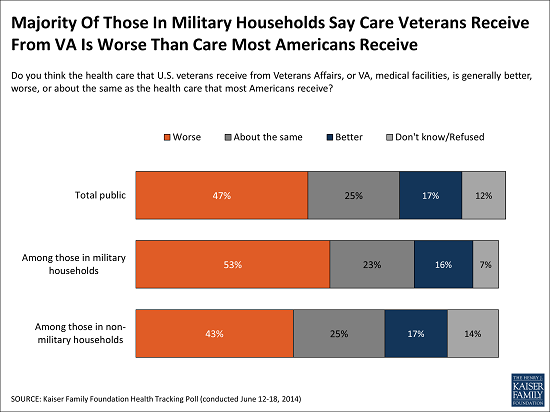 Most of the overall public (63%) say the long waiting lists for veterans are signs of widespread problems throughout the VA system, with a much smaller share (22%) saying the problem is limited to a few facilities. People in military households are even more likely than the general public to believe the problems are widespread (71%).

The survey was designed and analyzed by public opinion researchers at the Kaiser Family Foundation and was conducted from June 12-18 among a nationally representative random digit dial telephone sample of 1,202 adults ages 18 and older. Interviews were conducted in English and Spanish by landline (601) and cell phone (601). The margin of sampling error is plus or minus 3 percentage points for the full sample. For results based on subgroups, the margin of sampling error may be higher.