As the Senate considers Judge Amy Coney Barrett’s nomination to the Supreme Court, the October KFF Health Tracking Poll finds a large majority (79%) of the public do not want the Court to overturn the Affordable Care Act’s protections for people with pre-existing medical conditions, up 17 percentage points since last year when 62% held this view.

The Supreme Court is scheduled to hear arguments a week after Election Day in a challenge to the 2010 health law led by conservative states and backed by the Trump administration, making the law’s fate a flashpoint in Judge Barrett’s confirmation hearings and the 2020 election.

Majorities of Democrats (91%), independents (81%), and Republicans (66%), now say they do not want to see the Supreme Court overturn the ACA’s pre-existing condition protections. The shares have increased by double digits since last year for each group. 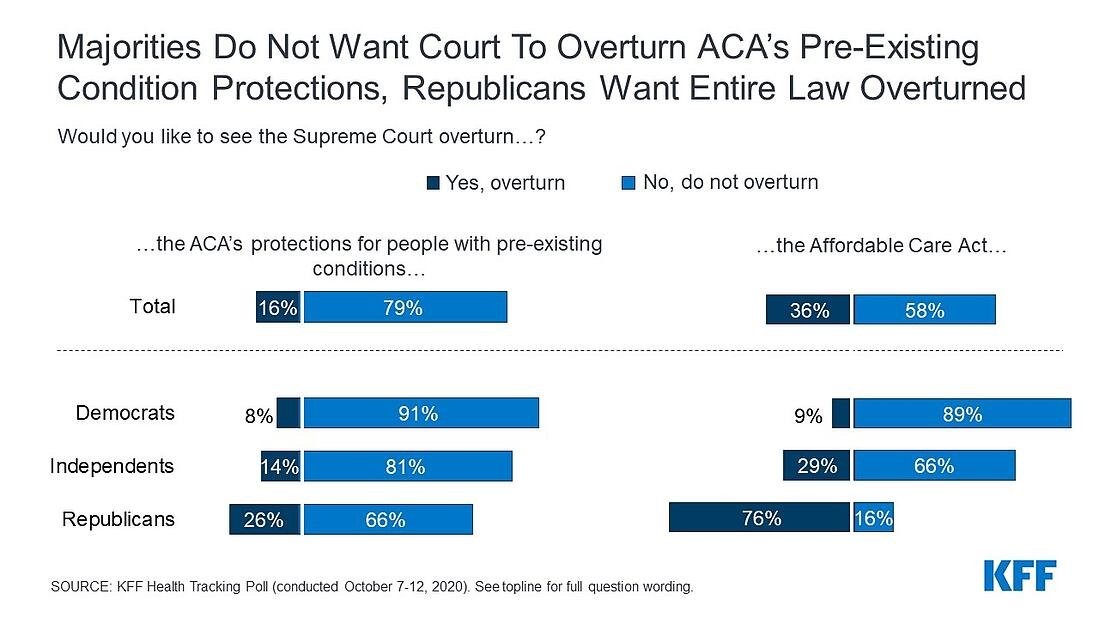 One potential reason that so many Americans want to preserve those ACA provisions is that most people (59%) say they live in a family with someone who has a pre-existing or chronic health condition. About half say they are worried someone in their family will not be able to afford health coverage (54%) or would lose coverage (51%) if the ACA were overturned.

“Many Americans worry about what could happen to them if insurance companies were able to discriminate against family members with pre-existing conditions, and that’s why the issue has become a flashpoint in the election,” KFF President and CEO Drew Altman said. “Now COVID could become a pre-existing condition, potentially adding to their anxiety.”

When asked whether President Trump has a plan to protect people with pre-existing conditions, just over half (53%) of the public says he does not – though there are big partisan differences. A large majority of Republicans (83%) say President Trump does have a plan, while most Democrats (90%) and independents (57%) say he does not.

The poll finds that 55% of the public now holds a favorable view of the ACA, up slightly from last month (49%) and matching the highest share ever recorded in 10 years of KFF polling; 39% now hold unfavorable views of the law.

The poll also probes voters’ views of the candidates on health care issues in play in the campaign, and finds that they prefer former Vice President Joe Biden’s approach to President Trump’s across a range of issues, including women’s reproductive health and abortion; the ACA; protecting people with pre-existing conditions; dealing with the coronavirus pandemic; reducing what people pay for health care; and protecting people from surprise medical bills.

Biden also holds a narrower edge on two other health issues that President Trump has championed: developing and distributing a COVID-19 vaccine (Biden 51%, Trump 42%) and lowering the cost of prescription drugs (Biden 50%, Trump 43%). This reflects a shift in voters’ views on drug costs since September, when voters were more divided on who has the better approach (Trump 46%, Biden 42%). 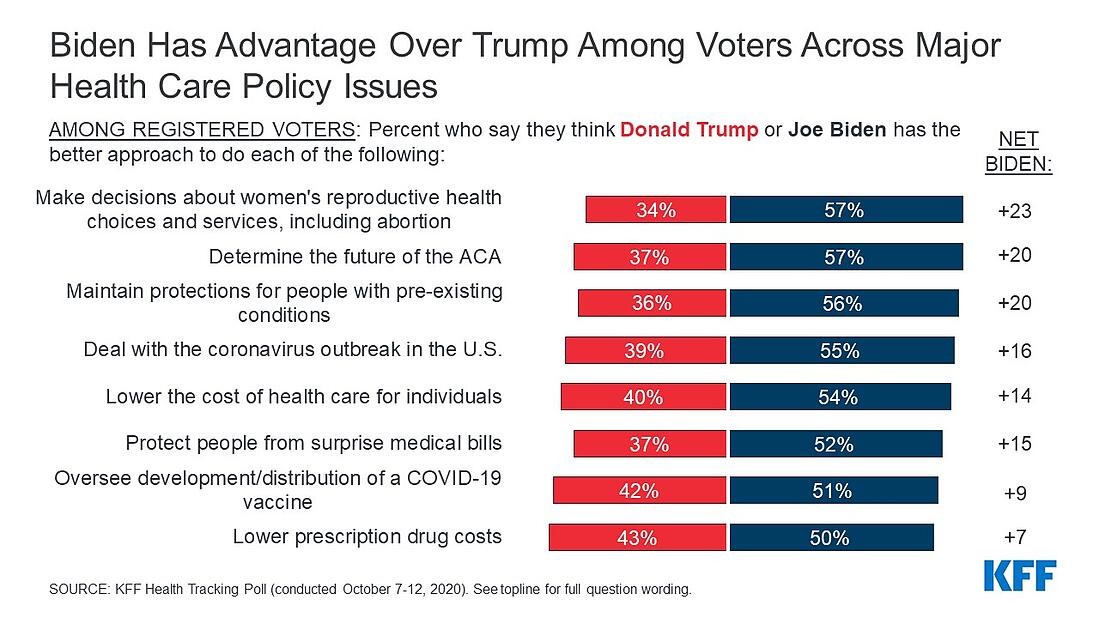 Designed and analyzed by public opinion researchers at KFF, the poll was conducted from Oct. 7-12 among a nationally representative random digit dial telephone sample of 1,207 adults. Interviews were conducted in English and Spanish by landline (290) and cell phone (917). The margin of sampling error is plus or minus 3 percentage points for the full sample and 4 percentage points for voters. For results based on subgroups, the margin of sampling error may be higher.