At a time when debate is beginning about a national Medicare-for-all plan and other approaches to expanding coverage through public programs, this month’s KFF Health Tracking poll examines Americans’ early opinion on a range of options under consideration. 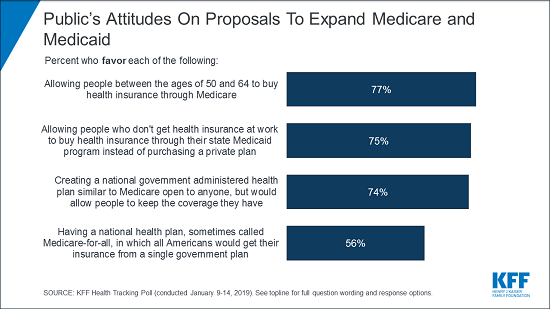 This month’s poll also probes attitudes after hearing common arguments for and against a national Medicare-for-all plan that could play a role in a future legislative debate. The results show how the public’s attitudes can shift significantly depending on what arguments people hear. 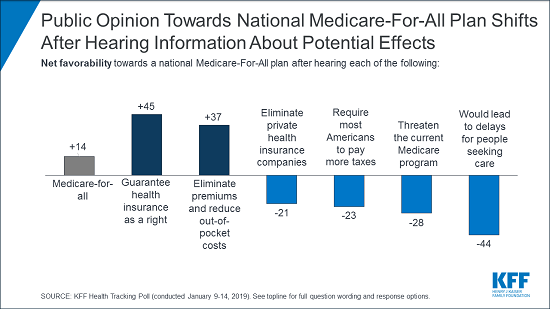 When asked to choose a top priority, Democrats rank ensuring the Affordable Care Act’s protections for people with pre-existing conditions first (31%), ahead of other priorities such as passing Medicare-for-all (20%), and lowering prescription drug costs (20%).

When Democrats were asked whether their party’s new House majority should focus on improving and protecting the ACA or passing a Medicare-for-all plan, half (51%) say the ACA and nearly four in 10 (38%) choose Medicare-for-all.

The poll finds that less than half (44%) of the public are aware of a December ruling by a federal judge in Texas that the ACA is invalid and should not be in effect.

When told that the ruling deemed the ACA was invalid and should not be in effect, more Americans disapprove (51%) than approve (41%) of the ruling, with a sharp partisan split mirroring the public’s overall views of the law.

Designed and analyzed by public opinion researchers at the Kaiser Family Foundation, the poll was conducted from January 9-14, 2019 among a nationally representative random digit dial telephone sample of 1,190 adults. Interviews were conducted in English and Spanish by landline (285) and cell phone (905). The margin of sampling error is plus or minus 3 percentage points for the full sample. For results based on subgroups, the margin of sampling error may be higher.