The public paid more attention to news coverage of the measles outbreak in the U.S. and the resulting debate on whether vaccinations should be required for all kids than any other news story included in this month’s Kaiser Health Policy News Index.

A total of 70 percent of Americans say they closely followed the measles story, more than say the same about the killing of Japanese hostages by ISIS (59%), ongoing Republican efforts to repeal or replace the Affordable Care Act (51%), President Obama’s veto of the Keystone XL pipeline legislation (48%) and other stories. 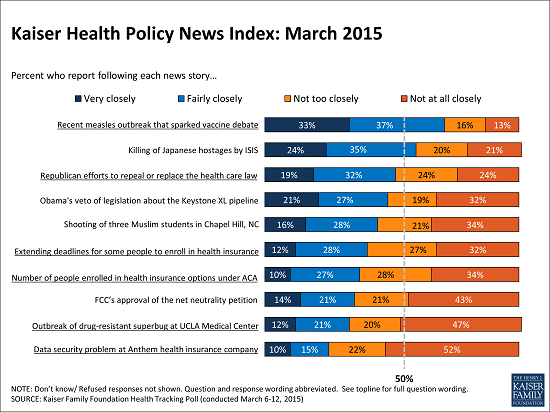 When asked how worried they are about the measles outbreak, more than half (56%) say they are not too or not at all worried. A somewhat smaller share (43%) say they are very or somewhat worried. Those who report closely following the story are much more likely to say they are worried about measles as those who did not follow the story closely (49%, compared to 29%).

The Kaiser Health Policy News Index is designed to help journalists and policymakers understand which health policy-related news stories Americans are paying attention to, and what the public understands about health policy issues covered in the news. The questions are part of March Kaiser Health Tracking Poll, conducted from March 6-12 among a nationally representative random digit dial telephone sample of 1,503 adults. Interviews were conducted in English and Spanish by landline (600) and cell phone (903). The margin of sampling error is plus or minus 3 percentage points. For results based on subgroups, the margin of sampling error may be higher.