The standout news story this month, health policy or otherwise, was the measles outbreak in the U.S. that sparked debate on whether vaccinations should be required for all kids, followed closely by 7 in 10 Americans (70 percent). About half of the public says they followed ongoing Republican efforts to repeal or replace the health care law (51 percent), and about 4 in 10 say they followed news about extending the deadlines for some people to enroll in health insurance marketplaces (40 percent) and coverage of how many people have enrolled in health insurance under the ACA (37 percent). Fewer Americans report closely following the outbreak of a drug-resistant superbug at UCLA Medical Center (33 percent), and a data security problem at Anthem health insurance company (25 percent). For comparison, 6 in 10 also report closely following non-health news stories, such as the killing of Japanese hostages by ISIS (59 percent). And, just under half of the public report following a handful of other national stories, such as President Obama’s veto of legislation that would have approved construction of the Keystone XL pipeline (48 percent), and the shooting of three Muslim students in Chapel Hill (44 percent), while about a third (35 percent) say they closely followed news about the FCC’s approval of the new neutrality petition in an effort to maintain an open internet. This month, many health policy stories appear to have captured the public’s attention to the same degree as coverage of other policy decisions and national events asked about in the survey. 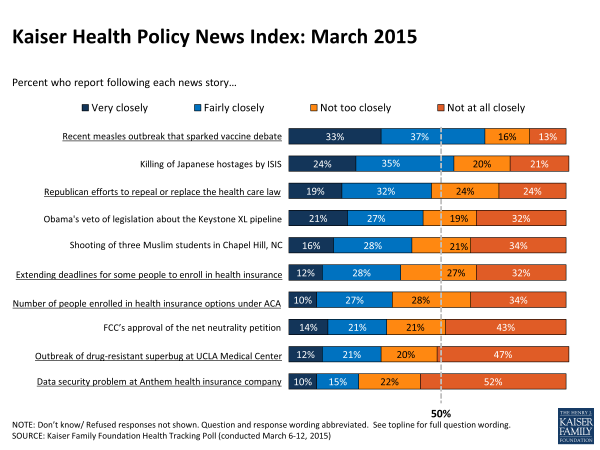 A large majority (70 percent) report closely following the measles outbreak, and subsequently, nearly half (46 percent) correctly identified that the number of confirmed measles cases in the United States since the outbreak began late last year is closer to 100, as opposed to closer to 1,000 (31 percent), closer to 100,000 (8 percent) or closer to a million (2 percent) (the official estimate was about 140 when the survey went into the field, and has since risen to about 170). Those who say they followed the news coverage of this story closely are more likely to know the total number of confirmed measles cases than those who say they did not follow the story closely (50 percent compared to 35 percent, respectively). 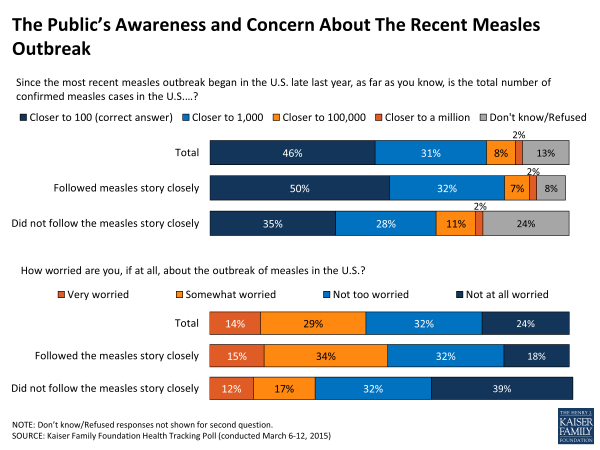