An Uptick in State Spending for Medicaid is Projected for FY 2017, As the 5 Percent State Share of Medicaid Expansion Costs Phases in

After record increases in fiscal year 2015, growth in Medicaid enrollment and total Medicaid spending nationally slowed substantially in FY 2016 and are projected to continue to slow in FY 2017 as the initial surge of enrollment under the Affordable Care Act’s coverage expansions tapered off, according to the 16th annual 50-state Medicaid Budget Survey by the Kaiser Family Foundation’s Commission on Medicaid and the Uninsured.  Despite recent trends, Medicaid officials identified high cost and specialty drugs as an upward pressure on total Medicaid spending. 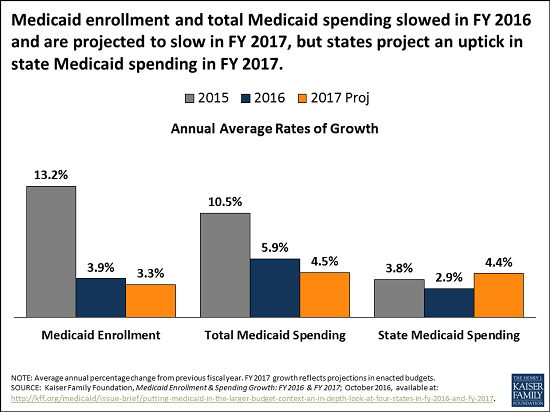 The Kaiser survey also shows an increase in state Medicaid spending growth in FY 2017 tied to the requirement for the 32 Medicaid expansion states (including Washington, DC) to start paying a five percent share of expansion costs beginning January 1, 2017. The federal government paid 100 percent of the expansion costs in 2014-2016.

Pressure to control Medicaid spending continues as growth in overall state revenues slows, or in some states, revenues decline. A 70 percent drop in oil prices since 2014, for example, has resulted in falling tax revenue in oil-dependent states such as Alaska, North Dakota, and others, causing budget shortfalls with implications for Medicaid programs.

Other key findings of the survey include:

These and other findings from the 50-state survey (conducted by analysts at the Foundation and Health Management Associates) were discussed today at a public briefing held jointly by Kaiser and the National Association of Medicaid Directors (NAMD). The following new reports are available: