The latest Kaiser Health Tracking Poll finds the public’s views souring on the Affordable Care Act (ACA) in November, with about half having an unfavorable view of the law and a third having a favorable view, a gap that was seen only once before, during the Republican presidential primaries in 2011. This negative shift in opinion comes amid heavy news coverage of the website problems plaguing the law’s online health insurance exchanges and stories about individuals being dropped from their insurance coverage because their plans don’t meet minimum requirements set by the ACA, stories that were followed closely by more than half the American public this month. The partisan divide on the law continues, but support among Democrats dropped sharply this month after rallying in September and October. Views among women also shifted this month, and for the first time in Kaiser tracking, the share of women with an unfavorable view outnumbered those with a favorable view by a large margin (48 percent versus 32 percent). Visibility of the health insurance exchanges increased among the public overall in November, but reaching the uninsured with information remains a challenge – about four in ten uninsured say they’ve heard nothing at all about the new marketplaces to date, and two-thirds say they still don’t have enough information about the law to know how it will impact them. Still, nearly six in ten of those who currently lack coverage say they plan to get insurance in 2014.

Overall Views Of The ACA Take A Negative Turn

Amid heavy news coverage of HealthCare.gov’s website problems and stories about individuals being dropped from their insurance plans, the American public’s overall views of the ACA took a negative turn in November. This month, roughly half (49 percent) say they have an unfavorable view of the law and a third (33 percent) have a favorable view. In nearly four years of Kaiser tracking on the law, the gap between negative and positive views (currently 16 percentage points) has been this large only once before, in October 2011 (17 percentage points) when the ACA was getting lots of negative attention in the Republican presidential primaries and the country was focused on the upcoming election and the Occupy Wall Street movement. 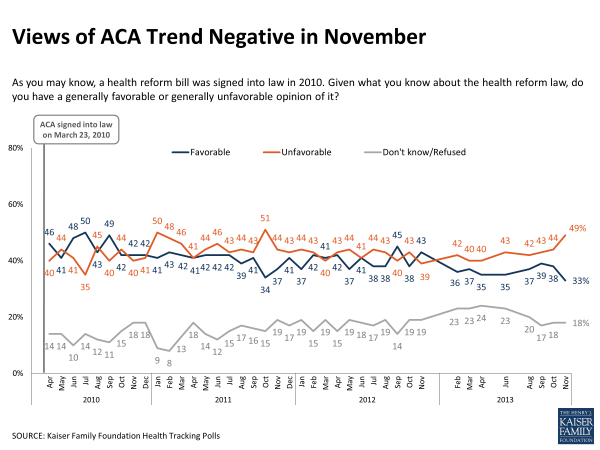 Views of the law shifted more negative this month among most demographic groups, but the drop was sharpest among Democrats. After rebounding in September and October, the share of Democrats viewing the law favorably stands at 55 percent in November, closer to where it had been earlier in 2013. 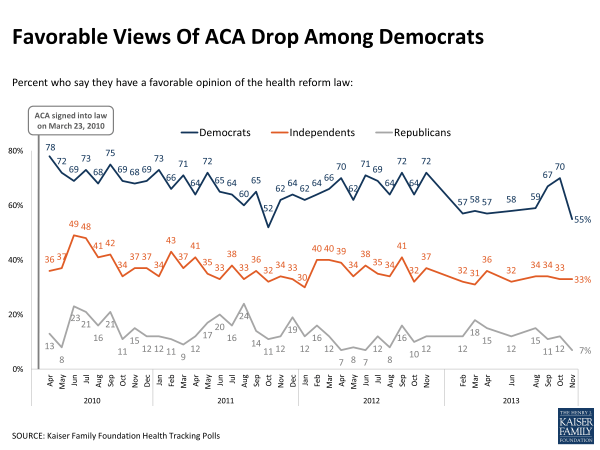 Women, who have historically been evenly divided on the law, registered their most negative views on the law to date, with 48 percent saying they have an unfavorable view of the law and 32 percent favorable. The gap between unfavorable and favorable views among women is up 15 percentage points since last month. 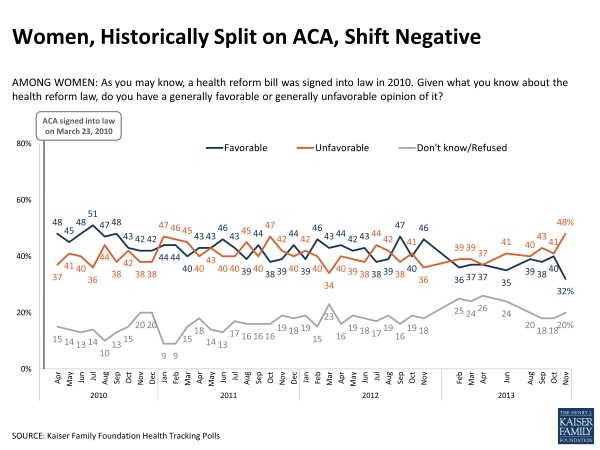 This negative shift in views of the law may be driven more by concern about the law’s impact on the country overall than on one’s personal situation. While a plurality says they don’t think the law will make much difference for their own families (a share that hasn’t changed much over the past year), the share saying the country will be worse off under the law reached a new high in Kaiser polling this month. Forty-three percent now say the law will leave the country worse off (up from 38 percent last month), compared with 34 percent who think the country will be better off and 15 percent who say it won’t make much difference. 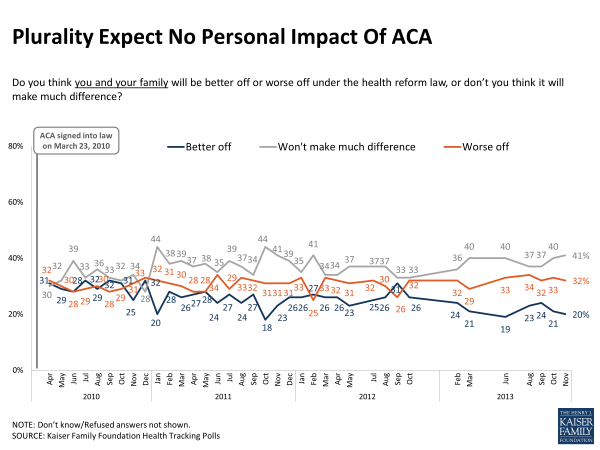 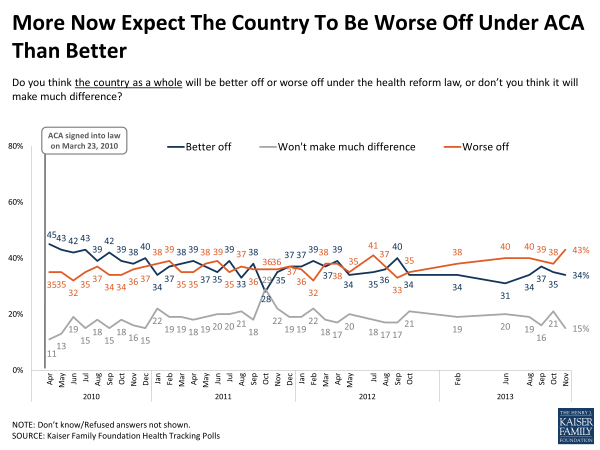 This negative shift in views comes at a time when the public reports paying close attention to news stories related to the ACA. Over half (55 percent) say they have followed news about website problems with the health law’s online insurance marketplaces “very” or “fairly” closely (roughly equal to the share who reported following these stories in October). The same share reports paying close attention to news stories about people being dropped from their health insurance. Attention to both of these news stories trails behind attention to reports about U.S. economic conditions. 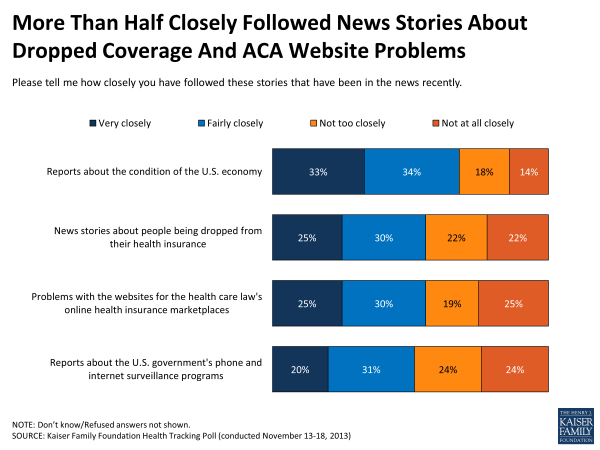 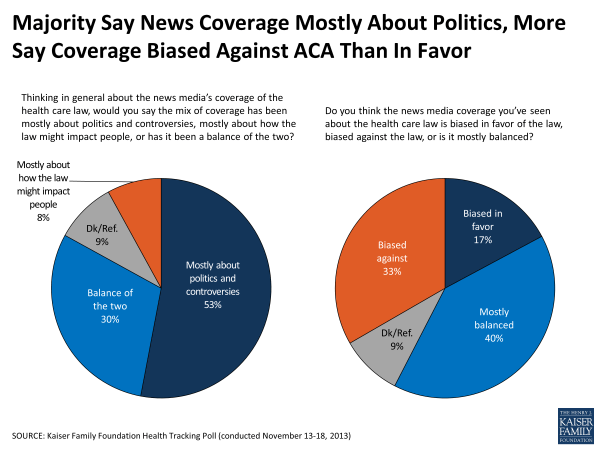 Visibility Of Health Insurance Marketplaces Increases, But Reaching The Uninsured With Information Remains A Challenge

Just over a month into open enrollment in the ACA’s health insurance exchanges, visibility of the new marketplaces has increased. This month, 42 percent of the public say they have heard “a lot” or “some” about the health insurance marketplace, twice the share who reported hearing as much in September. Among the uninsured, a key target group for outreach, visibility of the exchanges has also increased since September (from 15 percent to 29 percent), though it remains lower than among the general public.

Despite the information challenge, nearly six in ten (58 percent) of the uninsured say they plan to get health insurance in 2014, while a third (34 percent) say they won’t get coverage and 8 percent are unsure.

Since October 1, many journalists and others have drawn parallels between the ACA’s troubled rollout and the Medicare “Part D” prescription drug benefit, which some say had a similarly rocky launch in 2006. Among seniors, the program was unpopular at first; 50 percent had an unfavorable view of the program and 28 percent a favorable view in December 2005, just before enrollment began. In November 2006, when the first year enrollment was complete and most of those who enrolled had some experience using their new plans, views were more positive, with 42 percent of seniors expressing a favorable view of the program and 34 percent an unfavorable one.

The latest Kaiser Health Tracking poll finds that seven years later, the Medicare Part D benefit is quite popular: 63 percent of seniors view it favorably and just 14 percent view it unfavorably. Among those who are enrolled in a prescription drug plan, 85 percent say their experiences using the benefit have been positive, including six in ten (59 percent) who say they’ve been “very” positive.

Of course, it is far too early to tell what will happen to public opinion on the ACA as it moves through the next phase of implementation, but the Medicare Part D experience suggests that it is not unusual for a new law of this sort to be poorly perceived at the outset. 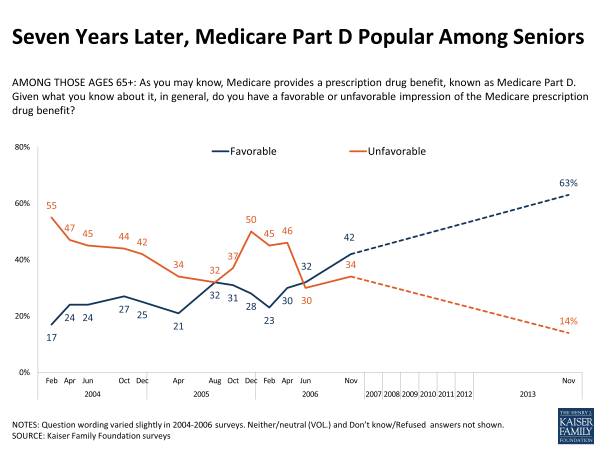