The latest Kaiser Health Tracking Poll finds that following the Supreme Court’s decision in King v. Burwell, a case challenging the legality of health insurance subsidies in states with federally operated exchanges under the Affordable Care Act (ACA), public attention to the case inched up, though many Americans remain tuned out amid other breaking news stories. When told that the Court ruled to keep the law as it is, allowing subsidies to be provided to low- and moderate-income people in all states regardless of who runs their Marketplace, about 6 in 10 say they approve of the decision while about a third disapprove. Even among Republicans and those who view the ACA unfavorably, about 3 in 10 say they approve of the Court’s decision. The ruling does not appear to have had an immediate effect on the public’s overall views of the law. Opinion remains pretty much evenly divided (43 percent favorable, 40 percent unfavorable), as it has been for the past several months. Still, most Americans do not think the ACA has cleared its last big hurdle with the recent Supreme Court ruling; just 18 percent think the recent debate over who can receive financial help under the law was the last major battle over the ACA, while nearly 8 in 10 think there will be more major battles about the law in the future.

The health care law faced its second major test at the Supreme Court this session, when the legality of who is eligible to receive federal subsidies was challenged in the case King v. Burwell. Since news media began covering the case late last year, small shares of the public have reported hearing much about it. Those shares inched up in recent months, and in the most recent poll (conducted immediately following the ruling), 39 percent say they’ve heard “a lot” or “some” about the case, up from 27 percent earlier in June. Still, even after the ruling a majority (61 percent) say they have heard only a little (30 percent) or nothing at all (31 percent) about the case. 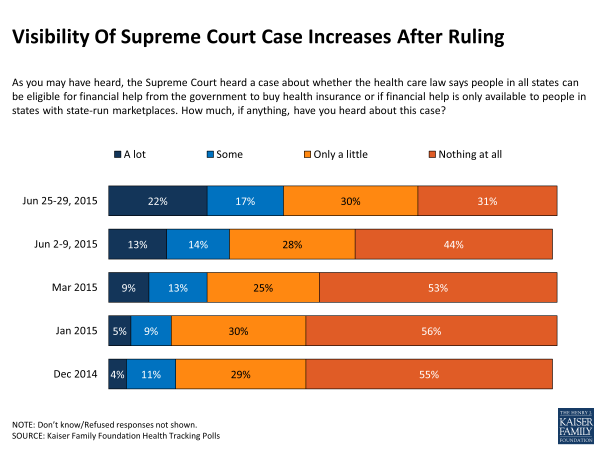 A number of other high-profile news stories garnered more attention than King v. Burwell this month, including the shooting at the Emanuel A.M.E. Church in Charleston, which was followed closely by 8 in 10 Americans (79 percent). About half (52 percent) say they followed the Supreme Court case about the health care law at least “fairly” closely, ranking it behind the Supreme Court case on same-sex marriage (64 percent), the manhunt for two escaped prisoners in New York (61 percent), and the 2016 presidential election campaigns (54 percent). Other health policy stories were followed by smaller shares of the public this month, including the release of 2016 health insurance premium rates (24 percent), Medicare cuts proposed in the trade bill (24 percent), potential mergers between some of the nation’s major health insurers (23 percent), and an expert panel’s recommendations for FDA approval of new cholesterol-lowering drugs (14 percent). 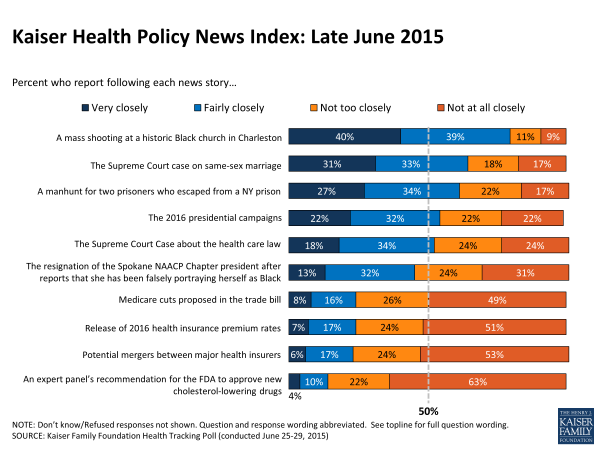 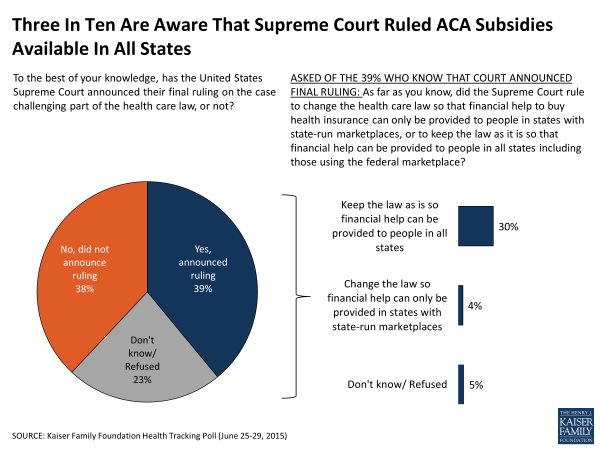 Opinions About The Ruling

When told that the Supreme Court decided to keep the health care law as it is so that low and moderate income people in all states can be eligible for government financial help to buy health insurance, just over 6 in 10 (62 percent) say they approve of the Court’s decision and about a third (32 percent) say they disapprove. Approval is higher in this case than it was following the 2012 Supreme Court decision upholding most major provisions of the ACA. In the June 2012 Kaiser Health Tracking poll, the public was more evenly split, with 47 percent approving and 43 percent disapproving of the Court’s decision in the earlier case.

When it comes to the current case, there are the expected partisan differences in views, with Democrats more likely to approve of the decision and Republicans more likely to disapprove. However, views on the law and on the Court’s decision in this case are not completely aligned. About three in ten Republicans (29 percent) and a similar share of those who view the law unfavorably (30 percent) say they approve of the Court’s decision in this case. 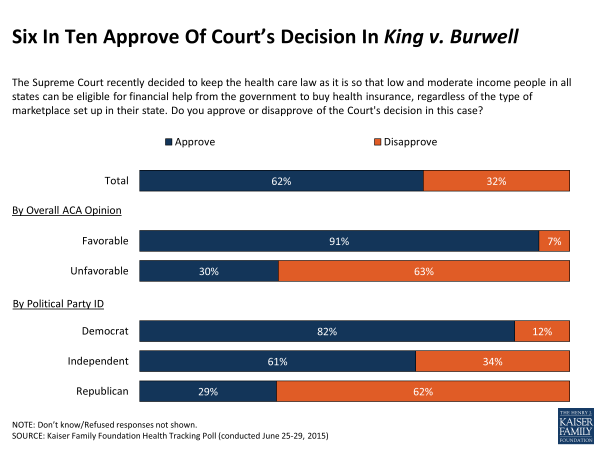 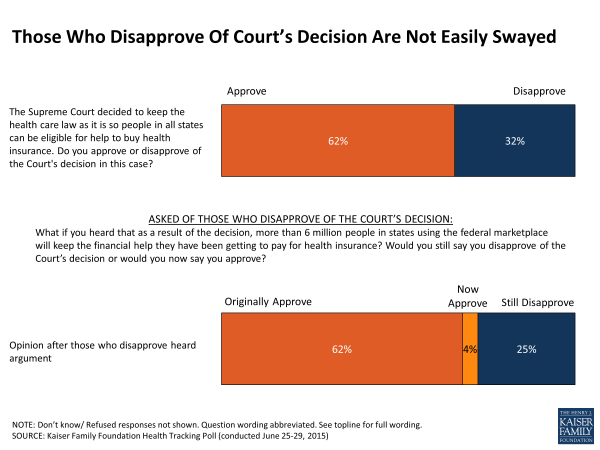 The public’s emotional response to the Court’s decision is fairly muted, with a little over a third (36 percent) saying they feel satisfied but not enthusiastic about the decision and 3 in 10 saying they feel disappointed but not angry. Smaller shares report feeling stronger emotions, such as enthusiasm (15 percent) or anger (11 percent). Not surprisingly, Republicans are more likely to report negative feelings about the decision and Democrats are more likely to report positive feelings, with independents falling in the middle. The strength of these emotions is about the same on either side of the aisle, with about a quarter (23 percent) of Republicans saying they feel angry and a similar share (27 percent) of Democrats saying they feel enthusiastic. 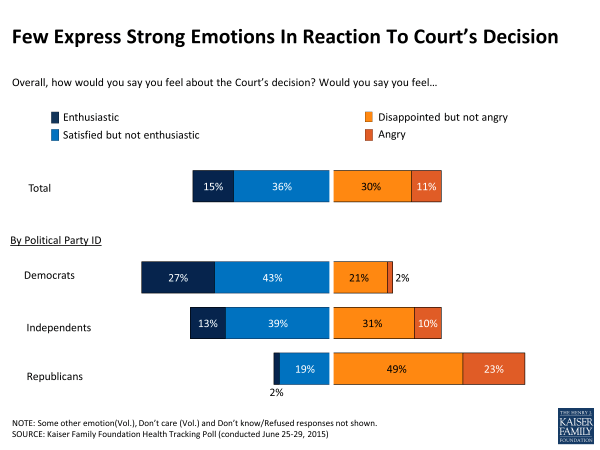 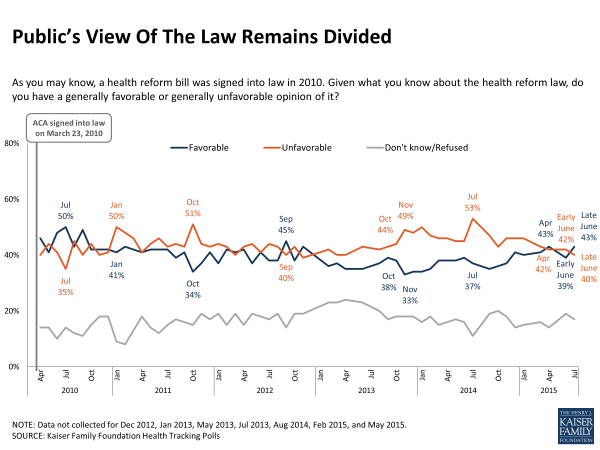 Among those who have an unfavorable view of the law, three-quarters (72 percent, or 29 percent of the public overall) want opponents to continue their efforts to repeal it or stop it from being fully implemented, while a much smaller share (23 percent, or 10 percent of the total public) say opponents should accept that it’s the law of the land and move on to other things. 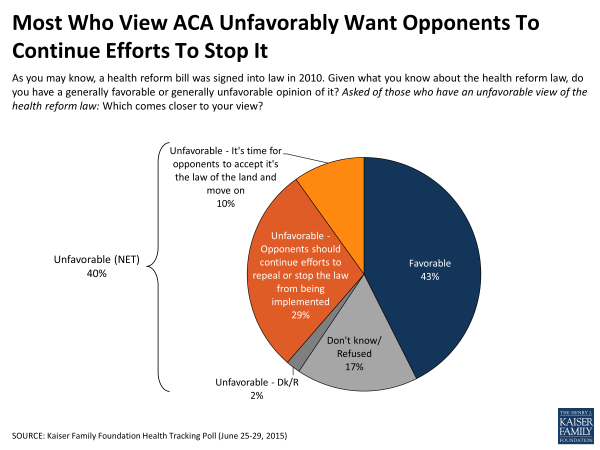 As a whole, Americans can’t seem to agree about whether the country should continue debating the health care law or not. Half (51 percent) think it is important to continue the debate, while 44 percent say they are tired of hearing about it and think the country should focus more on other issues. Republicans and those who view the law unfavorably are more likely to say it’s important for debate to continue, but still substantial shares of Democrats and those with a favorable view of the law hold this view. 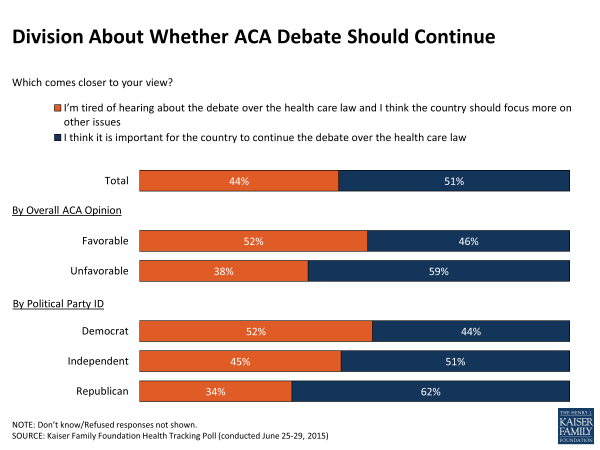 Personal preferences aside, a large majority of Americans (78 percent) think that future battles over the health care law are inevitable, while just 18 percent believe the most recent debate that reached the Supreme Court is the last major battle the law will face. 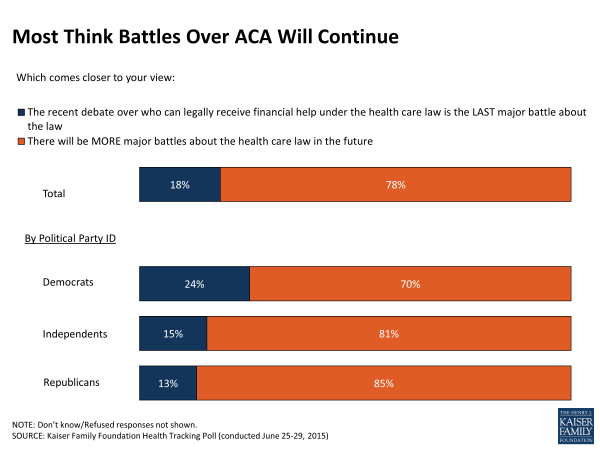 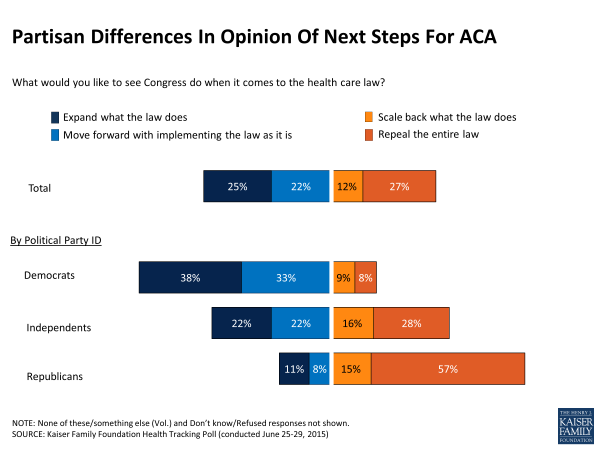