The latest Kaiser Health Tracking Poll finds that over half the public has an unfavorable view of the Affordable Care Act (ACA) in July, up eight percentage points since last month, while the share viewing the law favorably held steady at just under four in ten. A solid majority continues to prefer that Congress work to improve the law rather than repeal and replace it. The uptick in negative views comes at a time when Americans report hearing more negative than positive things about the ACA in advertising and personal conversations, and when large shares of the public want leaders in Washington to pay more attention to other issues like the economy and jobs, the federal budget deficit, education, and immigration. The poll also finds misperceptions about the ACA persist: fewer than four in ten are aware that enrollees in new insurance under the ACA had a choice between private health plans, while a quarter incorrectly believe they were enrolled in a single government plan and another four in ten are unsure.

This month’s poll also explored the public’s reaction to the Supreme Court decision upholding craft store chain Hobby Lobby’s ability to deny workers coverage of certain contraceptives based on the company’s owners’ religious beliefs. The public overall is evenly split between those who approve and disapprove of the Court’s decision, with only a small difference in opinion between women and men, but deep divisions by party identification, ideology, and religious affiliation. In terms of the potential consequences of the decision, a majority believes it is likely to prompt employers to try and deny their workers coverage of other types of health care services on religious grounds, and 45 percent believe the ruling will make it more difficult for women to obtain prescription birth control – a share that rises to more than six in ten among women under the age of 35. Almost half the public feels that if a woman works for an employer who does not pay for birth control coverage because of religious objections, the woman herself should have to pay for the coverage, while about a third think responsibility should lie with the insurance company. While most realize there is a connection between the Hobby Lobby decision and the ACA, just 12 percent see the ruling as a major setback for the law, and a solid majority continues to support the law’s contraceptive coverage requirement in general. Looking ahead to November, only a handful of voters say the Supreme Court decision will make them more likely to vote in the midterm election than they otherwise would have been.

After remaining steady for several months, the share of the public expressing an unfavorable view of the health care law rose to 53 percent in July, up eight percentage points since last month’s poll. This increase was offset by a decrease in the share who declined to offer an opinion on the law (11 percent, down from 16 percent in June), while the share who view the law favorably held fairly steady at 37 percent, similar to where it’s been since March.1 Republicans continue to be the group with the strongest opposition to the law, but the increase in the share with an unfavorable view between June and July was similar across the political spectrum and different demographic groups. [See Kaiser Health Tracking Poll Interactive] 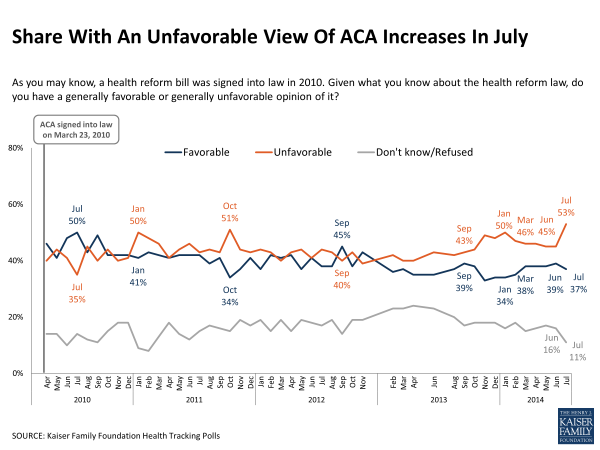 Despite the increase in the share with an unfavorable view of the ACA, a strong majority of the public continues to prefer that their representative in Congress work on improving the law (60 percent) rather than working to repeal and replace it with something else (35 percent), shares that have been consistent over the last several months. Even among Republicans and those with an unfavorable view of the law, about a third would prefer to see the law improved rather than repealed and replaced (32 percent and 36 percent, respectively). 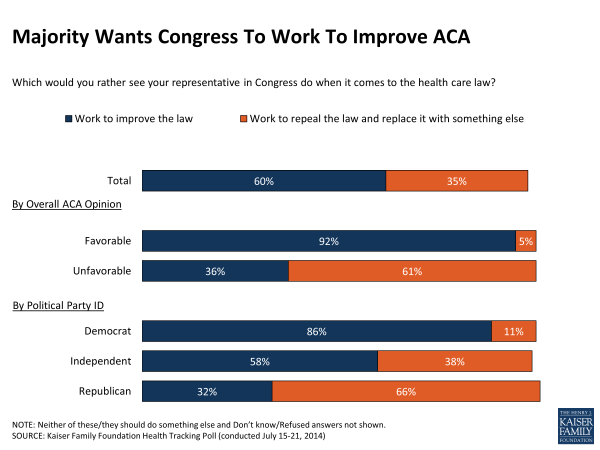 Previous tracking polls have found that misperceptions about the ACA are common among the public, and more than four years after the law’s passage this continues to be the case. The July poll finds that fewer than four in ten Americans (37 percent) are aware that people who got new health insurance under the ACA had a choice between private health plans, while about a quarter (26 percent) think the newly insured were enrolled in a single government plan and about four in ten (38 percent) say they don’t know enough to answer the question.

The survey also finds differences in perceptions on this question by political party identification and other demographic characteristics. For example, Republicans (34 percent) are less likely than Democrats (43 percent) to say that enrollees had a choice of private health plans. Other groups that are less likely to be aware of this fact include those with an unfavorable view of the law (32 percent), self-described conservatives (31 percent), people ages 65 and older (29 percent), and the uninsured (29 percent). 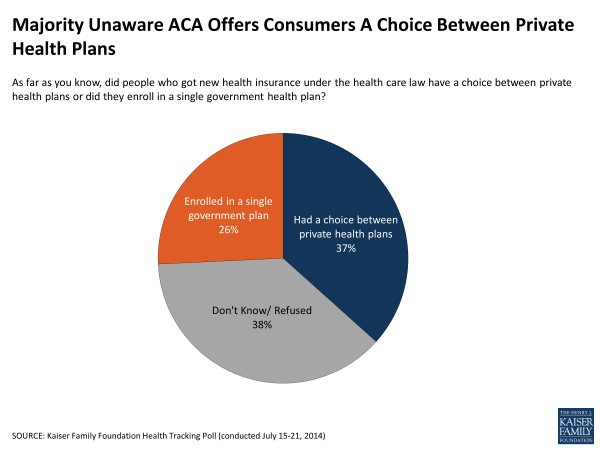 ACA Somewhat Out Of The Limelight, But Personal Conversations and Ads More Negative Than Positive

With other issues dominating the national agenda, the ACA has been somewhat out of the limelight in the past month. About half the public (49 percent) says the amount of news coverage they’ve seen about the law has stayed about the same in the last few months, but more say coverage has decreased (35 percent) than say it has increased (11 percent). The share saying they’ve had personal conversations about the law in the past month has also decreased somewhat (47 percent, down from 55 percent in March), as have the shares who report seeing ads or commercials opposed to the law (34 percent, down from 43 percent in April) or in support of it (27 percent, down from 43 percent in April).

Among the 47 percent who say they have discussed the law with friends or family, far more say they’ve heard mostly bad things rather than mostly good things in these conversations (27 percent versus 6 percent). Similarly, among the 53 percent who say they saw any political ads about the law in the past month, more than twice as many say the ads they saw were mostly in opposition to the law rather than mostly in support of it (19 percent versus 7 percent). 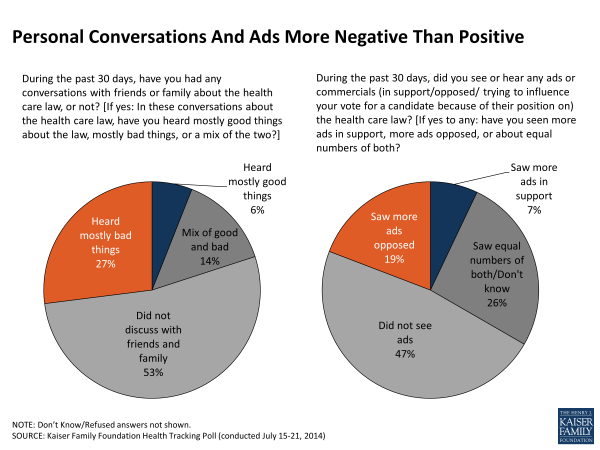 On a more personal note, a majority of the public (56 percent) continues to say they haven’t been directly impacted by the law yet, but almost twice as many feel the law has hurt them and their family (28 percent, mostly through increased health care and health insurance costs) as feel it has helped them (15 percent, mostly through increased access to insurance coverage).

Public Wants President And Congress To Pay More Attention To Issues, But Less So For Health Care And Women’s Health

With the exception of medical care for veterans, health care does not appear to be at the top of the public’s issue agenda at the moment. Large majorities of the public believe the president and Congress are paying too little attention to a variety of issues, including veterans’ health care (71 percent), the economy and jobs (70 percent), the federal budget deficit (68 percent), education (66 percent), Social Security (65 percent), and immigration (61 percent).  In terms of the issues the public is more likely to feel are getting too much attention from the president and Congress, health care (29 percent) tops the list, followed by women’s health issues (28 percent), the situation in Iraq (26 percent), climate change (22 percent), and taxes (20 percent). 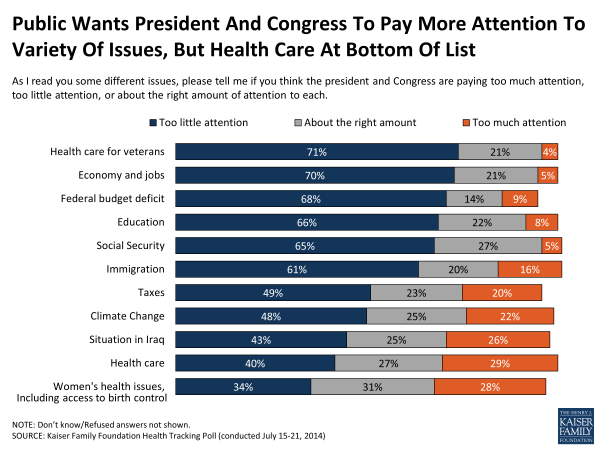 On June 30, the Supreme Court announced its decision in the case brought by craft store chain Hobby Lobby challenging the ACA’s contraceptive coverage requirement. According to the July Kaiser Health Policy News Index, roughly six in ten Americans closely followed news of the Supreme Court’s decision in the Hobby Lobby case, and just over half were aware that the Court decided that closely-held for-profit companies may choose not to pay for coverage of birth control in their workers’ health plans if the company’s owner has religious objections. 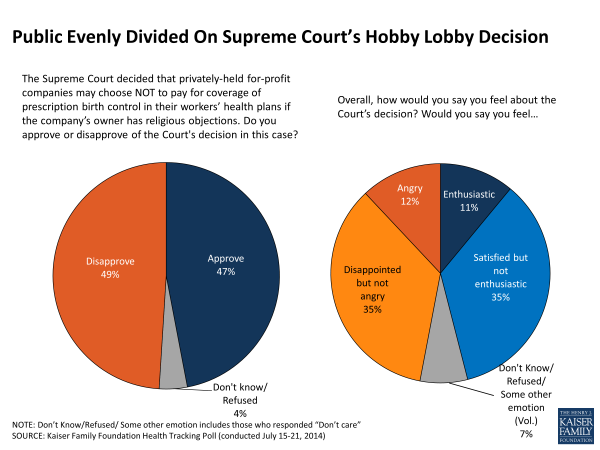 There is a small gender gap in views of the Supreme Court ruling, with a majority (53 percent) of women disapproving of the decision and men more evenly divided (50 percent approve, 46 percent disapprove). The bigger divide in opinion is by partisan identification, with a large majority of Republicans (71 percent) saying they approve of the decision and an equally large share of Democrats (7o percent) saying they disapprove. 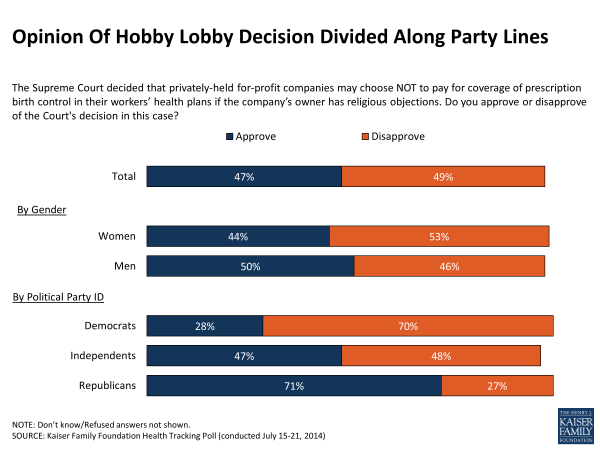 As a historical comparison, when the Supreme Court decided in June 2012 to uphold most provisions of the ACA, opinion was also divided (47 percent approved and 43 percent disapproved), but in that case a large majority of Democrats were supportive of the decision and a large majority of Republicans were opposed. 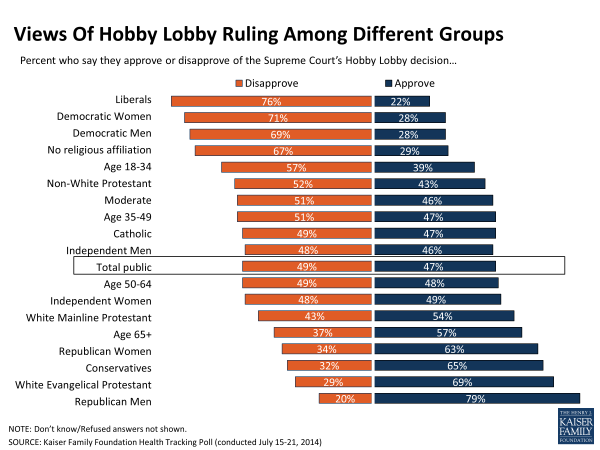 Nearly six in ten Americans (58 percent) believe it is “very” or “somewhat” likely that employers will use the Supreme Court’s decision in the contraceptive coverage case to attempt to deny their workers coverage for other types of health care services – such as vaccinations or blood transfusions – on religious grounds, while about four in ten (39 percent) think this is “not too” or “not at all” likely. There is once again a partisan divide on this question, with three-quarters of Democrats (75 percent) believing this is a likely outcome of the decision and six in ten Republicans (59 percent) saying it is not likely. 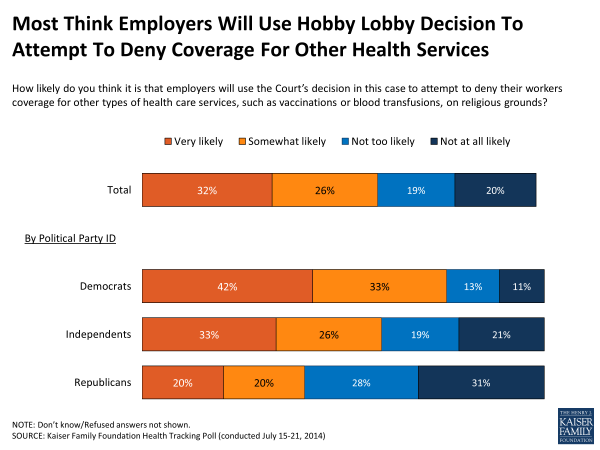 In the case where a woman works for an employer who does not pay for birth control coverage because of religious objections, about half the public (47 percent) believes the woman herself should have to pay for the coverage, while just over a third (36 percent) believe the insurance company should pay and 14 percent think the responsibility should fall on the government. Women and men have similar views of whose responsibility it is to pay for contraception in this situation, but a familiar partisan divide emerges once again, with Republicans more likely to say the woman herself should have to pay and Democrats more likely to place payment responsibility with the insurance company or the government. 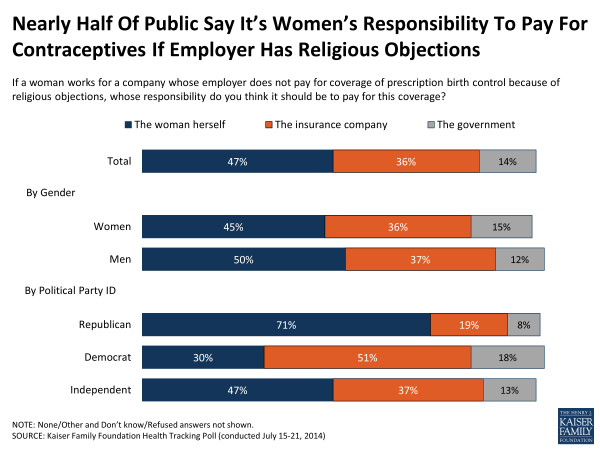 Over half the public (56 percent) is aware that the Supreme Court’s decision in the contraceptive coverage case is related to the ACA, while a third (34 percent) think the case is unrelated to the health care law and one in ten (9 percent) say they don’t know enough to say. Just 12 percent of the public overall sees the decision as a major setback for the law, while a quarter (25 percent) see it as a minor setback and almost one in five (18 percent) say it is not a setback. 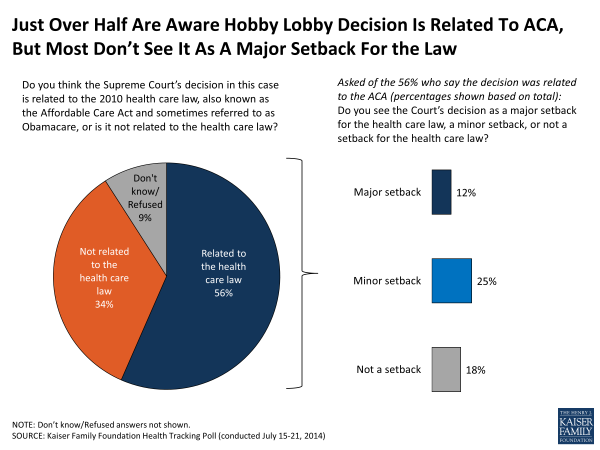 News of the Court’s decision does not appear to have made an impact on the public’s general level of support for the ACA’s contraceptive coverage requirement. A solid majority (60 percent) continues to support the law’s requirement that private health insurance plans cover the full cost of birth control, while about a third (33 percent) are opposed to the requirement. This level of support has held steady in Kaiser tracking polls since early 2012.

The vast majority of registered voters say that the Supreme Court’s decision in the contraceptive coverage case “doesn’t really change their plans” for voting in the midterm election this November, while just 11 percent say the decision will make them more likely to vote than they otherwise would have been and 3 percent say it will make them less likely to turn out. To the extent that the ruling is a motivating factor for a small share of voters, Democrats and those who disapprove of the Court’s decision are somewhat more likely to say the decision will motivate them to vote in November than Republicans, independents, and those who approve of the ruling.