The health policy stories included in this month’s Kaiser Health Policy News Index were followed closely by about 4 in 10 Americans. Forty-one  percent report “very” or “fairly” closely following news about the proposed laws in various states placing restrictions on abortion, the potential impact of the U.S. Supreme Court case about the health care law on some states, and the impact of the health care law on filing taxes. A slightly smaller share (32 percent) report closely following another health policy story about Congressional efforts to avoid cutting Medicare payments to doctors, also known as the “doc fix”. By comparison, larger shares of the public report closely following non-health news than report closely following health policy news. Of the stories asked about this month, the one that garnered the most attention was coverage of the white police officer charged with the murder of an unarmed black man in South Carolina, closely followed by nearly three-quarters of the public (73 percent) – a story that was breaking as the survey began. Over half report closely following other stories, including the Germanwings plane crash in the French Alps (59 percent), a new religious freedom law in Indiana that allows business owners to refuse service to gay customers (54 percent), negotiations over Iran’s Nuclear Program (53 percent), and a terrorist attack by Islamic militants at a university in Kenya (53 percent). The only non-health story to receive less attention than the health stories this month was coverage of the Congressional Republican budget proposals, followed closely by just over a third of the public (35 percent). 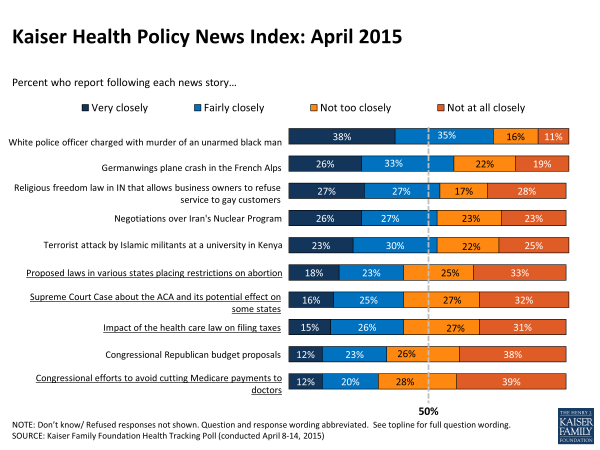 Tax Season And The ACA

News about the impact of the health care law on filing taxes was one of the most closely followed health policy stories in this month’s News Index. Half of the public correctly answered that the health care law requires nearly all Americans to report their health insurance status on this year’s taxes or else pay a fine. Still, that leaves half of the public who incorrectly answered that the requirement took effect last year (14 percent), next year (18 percent), or who said that they don’t know when it takes effect (18 percent).1 Those who report closely following the news story about the impact of the health law on filing taxes were more likely than others to correctly say the requirement to report insurance status while filing taxes goes into effect this year (58 percent vs. 44 percent).

About half of the public (52 percent) correctly say that when someone gets financial help from the government to pay for their health insurance premium, it is possible that they could end up owing money to the government if their income or family size changes during the year. A quarter (26 percent) incorrectly say that people receiving financial help from the government would not end up owing money and about 2 in 10 (22 percent) say that they don’t know. Again, those following the story in the news are more likely to be aware of this (58 percent vs. 48 percent). 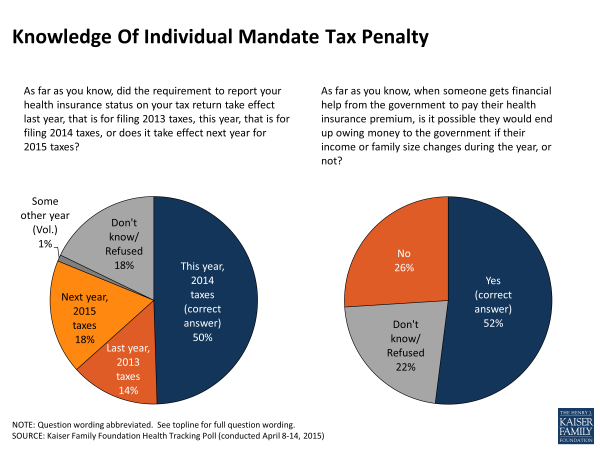 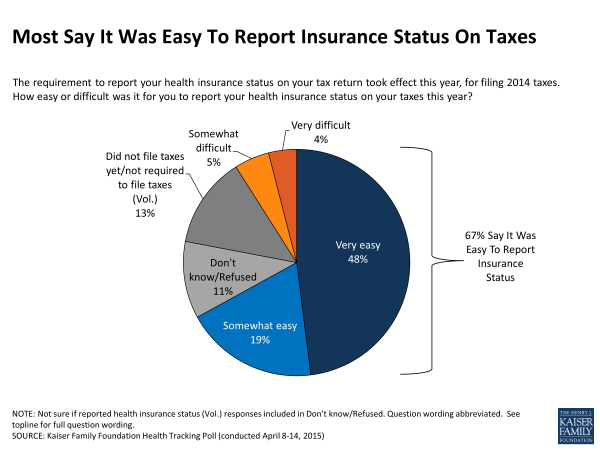