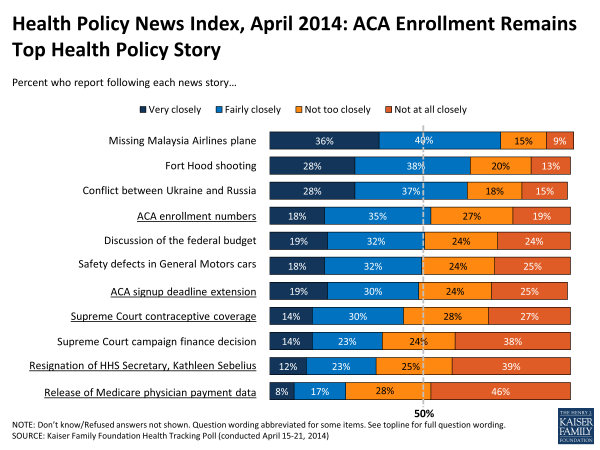 News of a surge in enrollment through the ACA’s health insurance marketplaces at the end of March caught the public’s attention this month; it was the most closely followed health policy news story, with over half (53 percent) saying they followed it “very” or “fairly closely.” The April 2014 Kaiser Health Tracking Poll found that many Americans retained the information they got from the news, as over four in ten (43 percent) were correctly able to identify that “about eight million” people1 had signed up for coverage through the ACA’s new marketplaces as of April. Over half of those who reported closely following the news about ACA enrollment were able to correctly identify the number of sign ups, while smaller shares of those who reported “not too closely” or “not at all closely” following the story (36 percent and 22 percent) were able to answer correctly.

Public attention to ACA enrollment lagged behind three non-health stories this month: the missing Malaysia Airlines flight (76 percent), a deadly shooting at Fort Hood Army post in Texas (66 percent), and the ongoing conflict between Ukraine and Russia (65 percent). About half of the public – similar to the share who say they closely followed the ACA enrollment numbers – reports closely following discussions of the federal budget (51 percent), reports about safety defects in cars made by General Motors (50 percent), and the extension of the deadline to sign up for health insurance  under the ACA (49 percent).

At the end of March, the Supreme Court heard arguments in two cases challenging the ACA’s requirement that for-profit companies cover birth control in their workers’ health plans. Over four in ten Americans (44 percent) say they followed news of the case “very” or “fairly closely”. This is slightly higher than the share that reported paying close attention to another Supreme Court news story: the decision overturning certain limits on campaign donations (37 percent). The Supreme Court contraception case was closely followed by similar shares of men and women, and similar shares of Democrats, Republicans, and independents.

Two other health policy stories this month were followed by smaller shares of the public: the resignation of Health and Human Services Secretary Kathleen Sebelius (35 percent) and the release of Medicare data detailing what individual physicians were paid in 2012 (25 percent).