What Paul Ryan’s Stance on 2016 Means for Health Care 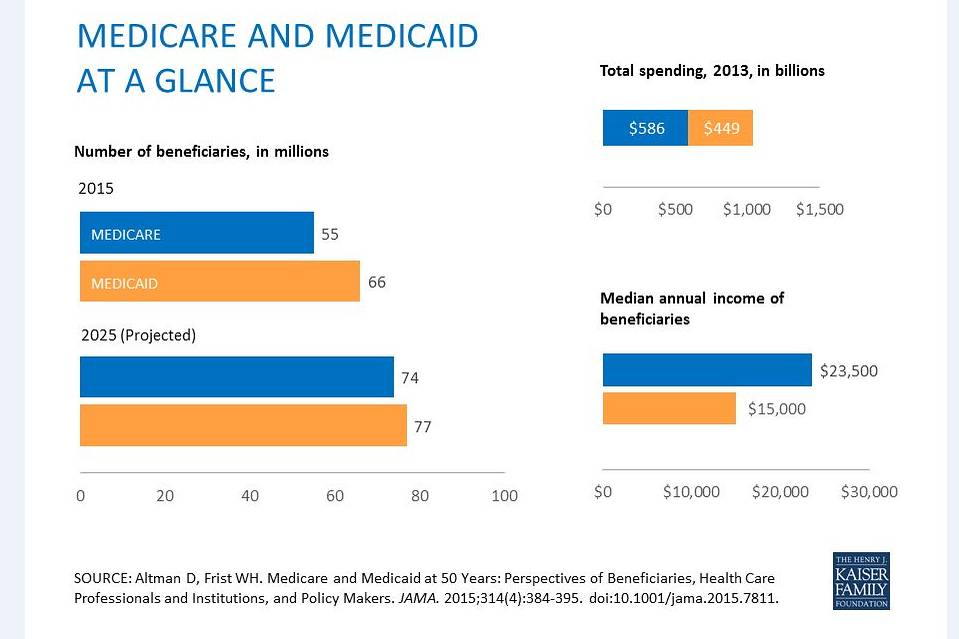 The decision by House Speaker Paul Ryan to bow out of any attempt to draft him as the Republican presidential nominee in Cleveland and press ahead with his domestic policy agenda could be significant for health care. The next big debate might not be about Republican proposals to repeal and replace the Affordable Care Act. It might focus more on the future of the two largest public health-care programs, Medicare and Medicaid.

As the chart above shows, Medicare covered 55 million and Medicaid covered 66 million people in 2015 at a cost of more than $1 trillion. Together, they represented 23% of the federal budget.

It’s likely that Mr. Ryan and Republicans working on these issues in the House will put forward variations on ideas they have previously advanced, such as transforming Medicaid into block grants to the states, with capped federal funding, and converting Medicare into some form of a premium support program. Having seen these ideas crash and burn in the past, Republicans may put forward more politically palatable proposals–though Democrats and liberals are still sure to oppose them fiercely. The impact on beneficiaries and states will depend on details of the proposals. It’s likely that, honoring political promises, these proposals will be coupled to some form of plan to repeal and at least partially replace the Affordable Care Act.

A legislative agenda dealing with all of U.S. health care’s major programs is not likely to diminish attention to any of its parts. Each program has strong constituencies and proposed changes will ignite partisan battle; Medicare is likely to be at the core of the hottest debate, even more fierce than that over the ACA. Any attempt to restructure Medicare–even one phased in so as to affect only future generations–could mobilize seniors with whom the GOP has generally been doing better in recent election cycles.

Medicaid is not necessarily much easier to change. While not popular with conservatives, the program serves some 70 million Americans who are mostly pleased with their coverage, according to surveys and focus groups of beneficiaries. When it comes to cuts, the program is not as popular with the public as Social Security and Medicare are, but it is still very popular. To some degree many changes long sought by conservatives are already happening incrementally: More than half of Medicaid beneficiaries are in private managed-care plans. Almost one-third of Medicare beneficiaries are enrolled in private Medicare Advantage Plans this year, rather than the traditional program, and the share is projected to grow to more than 40% by 2026. The same is true of private health insurance. Conservatives complain about the ACA, but their preferred vision of health insurance–with high deductibles and lots of “skin in the game” plans–is dominating in the marketplace. The trend is reinforced by many of the policies being sold in the ACA’s insurance marketplaces.

As House speaker, Paul Ryan will determine whether the next iteration of our national health debate is as much about Medicare and Medicaid as the ACA–or more so. Mr. Ryan’s announcement this week may ultimately leave a Republican health policy agenda laid out as a guidepost for the party regardless of who is elected in November and who future GOP candidates may be.