There has been a lot of health news over the past year, but which health stories really got through to the public? How about stories about Obamacare ranging from Republican efforts to repeal the law to stories about progress meeting enrollment targets? Or public health scares such as measles outbreaks or Zika? The scandals in VA health care? What about the stories about the political fight in Congress over Planned Parenthood funding?

It turns out Obamacare, known formally as the Affordable Care Act, didn’t make the list of top health stories. The story that broke through the most? The fight over Planned Parenthood funding. Public health scares also broke through. And one health policy story with a consumer angle made the top group: rising drug prices. 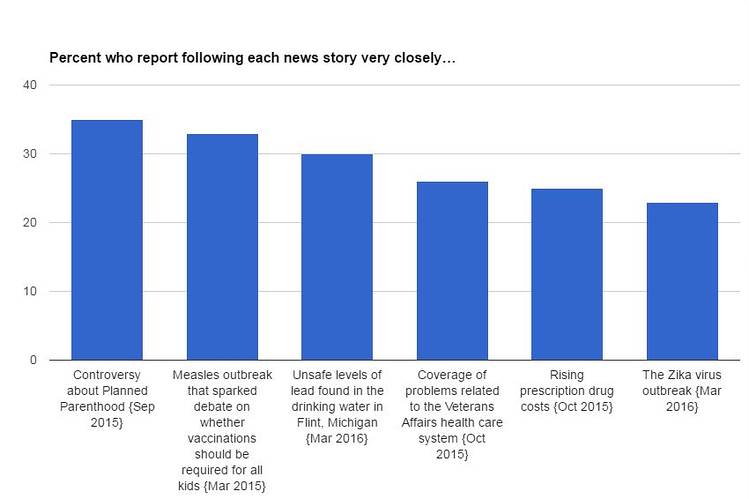 The chart above shows the six health stories over the last 12 months that were followed “very closely” by at least 20% of the American people. The controversy surrounding federal funding for Planned Parenthood was followed very closely by 35% of the public, making it the top health story by this measure by a small margin over the measles outbreak. By comparison, 51% of the public followed the Paris attacks very closely and 43% followed the debates about gun control very closely last October after campus shootings. The data are taken from the Kaiser Health Policy News Index, a series of monthly poll-based checks on which health stories the public is following and how closely people are following them.

Two public health threats, the measles outbreak in March 2015 (33%) and the Flint, Mich., water crisis (30%) came in second and third, while the scandal in the VA health care system followed very closely by 26%. Fifth on the list, and the only health policy story to make the top list, was rising prescription drug costs. That jibes with other poll findings showing curtailing rising drug costs at or near the top of the public’s priority list for the president and congress.

It was notable that no ACA story cracked the 20% mark. The top ACA story over the last year was a political story, the Republican repeal effort, followed very closely by 19%. The top ACA policy story was the coverage of ACA enrollment in the fall of 2015, at 17%.

It seems safe to say that the public is less interested in the ACA political wars than the press, politicians and political insiders are. It’s easy to conclude that the public is more interested in potentially scary epidemics or scandals and political controversies than other types of stories. But we also know from polling that that the public’s priorities for action in health focus on their worries about pocketbook issues such as rising deductibles and drug costs and how health care affects them and their families. In the end, it’s hard to sort out whether the health stories the public follows most closely are more a function of public interest and human nature, or of what the media decides to emphasize in coverage.